The Cincinnati Bengals nearly suffered a two touchdown deficit against the Denver Broncos by the third quarter. Bengals cornerback Terence Newman prevented that from happening.

Heading into week nine last year, the Cincinnati Bengals were desperately looking to snap a three-game losing streak. And it was a bad streak (because of the teams that Cincinnati lost to) that began with losses to the Miami Dolphins and then Cleveland Browns. Predictably, many climbed the railing on the Brent Spence Bridge, readying themselves to take the plunge of overreaction.

Cincinnati hosted the 4-3 Denver Broncos on the first Sunday in November, who featured a quarterback that's never lost to Cincinnati.

And it began as a struggle for the offense. Cincinnati was forced to punt on four of their opening five possessions, accumulating only four first downs during those failed possessions.

It wasn't until the third quarter that Cincinnati made their run, nearly disposing Peyton Manning and a favored Denver Broncos team.

On the 12th play of Denver's first possession in the third quarter, with 5:37 remaining on the clock, the Broncos had second-and-seven from the Bengals nine-yard line. If they punch it in, Denver takes a 24-10 lead.

The Broncos, with a single-back formation and twins to the right, featured two posts from Eric Decker (wide receiver out wide right) and Brandon Stokely in the slot. Demaryius Thomas, wide left, cut inside on a square-in route and running back Willis McGahee negotiated through the line of scrimmage. 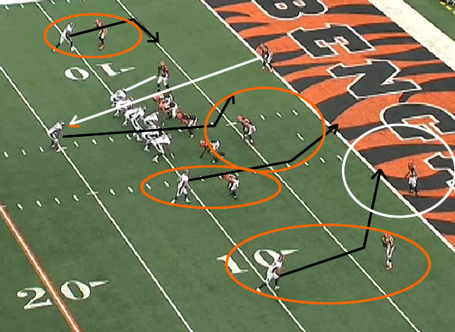 During the presnap, Nelson moved up inside the box, showing a Cover One with Crocker negotiating center field. 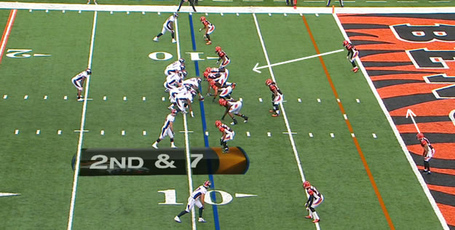 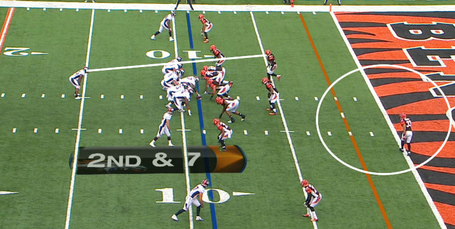 With Nelson in the box and Thomas' square-in route, Manning was forced to check off that route. Crocker playing center field also added too much risk for Stokely's slant over the middle, leaving Decker's post as the best option. Milliseconds after Manning fakes the handoff, he targets Decker with Crocker reading the quarterback and Newman covering.

Newman knew the route was coming, easily fighting Decker for the spot... and winning.

Instead of the Broncos taking a 24-10 lead over the Bengals, Terence Newman countered with an interception. Cincinnati's offense added a field goal during the possession, reducing Denver's lead to four points with over one minute remaining in the third quarter.