With the Bengals building momentum, they finally claimed a fourth quarter lead over the Denver Broncos. Again, thanks to Terence Newman. Except this time credit should go to Mike Zimmer too.

The Denver Broncos, who nearly built a two-touchdown lead with over five minutes remaining in the third quarter, suffered from an aggressive Cincinnati Bengals comeback. Now with a four-point deficit (instead of 14), thanks to a Terence Newman interception and Mike Nugent 49-yard field goal, the momentum clearly favored Cincinnati.

Momentum. It's a bitch.

Following a pair of Willis McGahee runs that generated two yards combined, the Broncos have third and eight from their own three-yard line with eight seconds remaining in the third.

Only two down linemen (Geno Atkins, Carlos Dunlap) rushed. Robert Geathers and Michael Johnson were already showing coverage. Linebacker Emmanual Lamur dropped back as a safety. Nate Clements was on the line of scrimmage, showing single-coverage over tight end Jacob Tamme. Crocker approached the box during Peyton Manning's cadence. Both Clements and Crocker blitzed... and neither had a blocker to deal with. 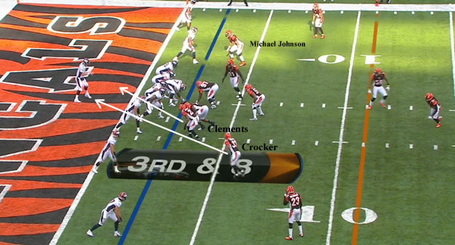 Looking directly at the blitzing defensive backs, Manning desperately needed to throw. Eric Decker, one of his favored targets last season, ran vertical down the right sidelines. Manning, clearly rushing his attempt, led the receiver a bit too much too.

Newman, keeping Decker in front of him, tracked down the overthrown football and intercepted the pass. 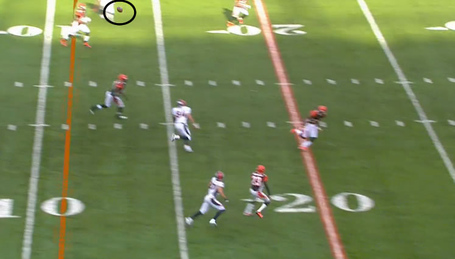 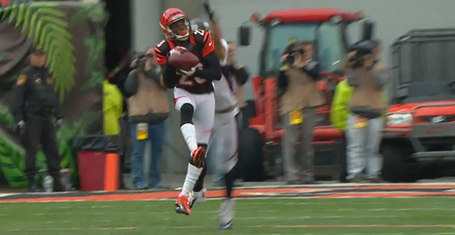 A 19-yard reception by A.J. Green nearly resulted in a touchdown before he was pushed out of bounds. With a first and goal from the two-yard line, BenJarvus Green-Ellis punched the football into the endzone and the Bengals secured a 20-17 lead with over 14 minutes remaining in the game.

Unfortunately, Peyton Manning's streak against the Bengals would survive. A soft defense and impressive Peyton Manning drives led to two fourth quarter touchdowns and an eventual 31-23 win over the Bengals. At least the comeback was fun.