Top three Bengals starters with the most concerns

We take a look at each unit on the Cincinnati Bengals and pick one player that generates the most concern.

Share All sharing options for: Top three Bengals starters with the most concerns

With the NFL relaxing during their final break before teams and players report to training camp, we're taking a look at a few items before charging into our major 2013 storylines. Eventually we'll get into position previews and training camp position battles, but we have time to prep those stories.

Today we're offering our biggest concerns with starters at each unit (offense, defense, special teams). We're not exploring positions that's developing into potential training camp battles, such as safety and center. Rather we're exploring players that are clearly defined (or announced) as starters when the regular season kicks off in Chicago.

Andrew Whitworth. Labeled as the best offensive tackle in the NFL by Pro Football Focus in 2010, Bengals starting left tackle Andrew Whitworth began declining. It wasn't so much talent degradation that was compounded by age.

It's an injury that's affected his play.

During the second month of the season in 2011, Whitworth started dealing with tendinitis that dramatically affected his push in the running game.

"Basically my quad shut down," Whitworth said in April 2012. "There was a lot of muscle loss in the muscle of my left leg and I've built it back up."

It's evident if you watch the film. Lack of mobility and revised assignments has forced the team to accommodate their Pro Bowl tackle. Instead of driving as a run blocker, Whitworth has often compensated with a pass blocking approach during the run game, aiming to push the defender around the running back.

An improvement, albeit slight in 2012, Whitworth was still feeling the pain. He elected to have his knee scoped earlier this year, forcing him to miss the team's offseason training program. Now he's starting to feel like he did prior to his injuries.

"I thought it was a thing I could tough out, but it kind of wears on you," Whitworth says. "It was time to get it fixed and I feel great. I don't feel any different than the first day I played in the NFL."

How Whitworth responds this year will be critical for the team that intends to revamp their running game. 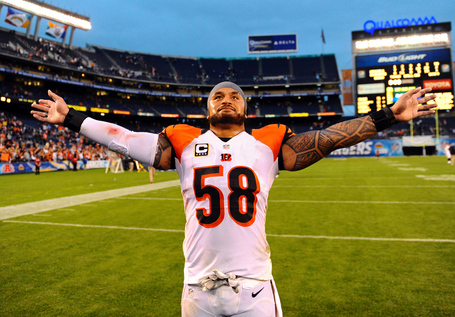 Rey Maualuga. An obvious inclusion if you've followed the Bengals over the past two years, Maualuga, at one time a fairly productive outside linebacker, has struggled since his transition inside. After Cincinnati's loss to the Houston Texans, Maualuga wasn't sure if the team wanted him back.

"I felt as if the playoff game was sort of like, if I perform well, they would want me. I don’t know if they want me, but I do know I didn’t perform well. If I did well, good results will happen," Maualuga said. "I felt as if those plays cost our defense due to my actions and where I was and how I didn’t execute it. So who knows? I really don’t know if they want me back."

Cincinnati signed Maualuga to a two-year deal in March.

Talent and instincts aren't so much a question for Maualuga as is his confidence. Bengals defensive coordinator provided insight into Maualuga's personality after Cincinnati lost their wild card game.

"He takes everything very hard, takes everything to heart and sometimes that holds him back. We were talking about it today," Zimmer said. "That was two days ago that we played the game. I said, ‘You’ve got to let that go.’ That’s not doing him any good to harbor all those thoughts that he let this guy down or me down or the team down. Because he didn’t.

"He’s very conscientious about not making a mistake, and if he does, it stays with him a little bit, yeah. He made some good plays in that game, too. Some real good plays. But because he’s the middle linebacker, he’s like the quarterback," Zimmer said. "A lot of people probably don’t see the plays where the defensive line messed up, and there was enough of those, too. Or they don’t see what the corner or safety did if the ball’s not thrown to them. Know what I mean? There were others where he just happened to be there and for some reason he’s kind of a lightning rod for people." 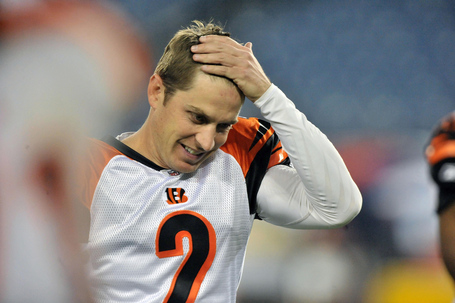 Mike Nugent. Not a starter in the strictest sense, there's a constant concern with Mike Nugent. In three years with the Bengals, Nugent has missed 11 of 48 possible games with an injury. And during two of those three years, Nugent's season has ended on Injured Reserve. Against the Indianapolis Colts in 2010, he tore a knee during an onside kick. During practice in 2012, he suffered a calf injury that forced him to miss the final quarter of the season.

Over 83 percent of his kickoffs reached the endzone, helping Cincinnati rank first in the NFL in average starting position after a kickoff (20.3-yard line). Against the Oakland Raiders, Nugent tied a franchise-record by nailing a 55-yard field goal.

In the end, it's a question of durability. Even though the Bengals re-signed Nugent and allowing Josh Brown to walk in free agency (a big risk in many my opinion), Cincinnati signed rookie Quinn Sharp on the offseason roster. We doubt the result is competition. Rather to develop Quinn if the Bengals find themselves needing to replace Nugent; which might be a concern from here on out.