We continue our top plays of 2012 series with a great fourth down conversion against the Miami Dolphins.

Share All sharing options for: Top Plays of 2012: Jermaine Gresham's fourth down conversion

Yet the first quarter was positively productive.

Cincinnati's defense forced a three-and-out during Miami's opening possession and Vontaze Burfict recovered a muffed punt return with over 12 minutes remaining in the first. The turnover led to a Mike Nugent 42-yard field goal and a 3-0 lead. Nate Clements dramatically shut down Miami's ensuing possession, which had reached the red zone. Terence Newman recovered the fumble forced by Clements.

Cincinnati responded with an enthusiastic drive, thanks to a little help from Bernard Scott's 29-yard sprint down the right sidelines. Eventually the Bengals had fourth and two with 3:23 remaining in the first quarter from Miami's 35-yard line.

Cincinnati showed a power formation, stacking the offensive line with Jermaine Gresham and Orson Charles to the right. Chris Pressley was the lead-back with BenJarvus Green-Ellis, who is one of the league's best at converting short yardage situations -- though he failed to gain a yard on third and two on the previous play. Miami's defense stacked the box.

Pressley and Green-Ellis go right. Andy Dalton takes the football and... fakes the entire world by holding onto the football!!

Green-Ellis wipes out the linebacker.

In the meantime, players went into their respective routes. 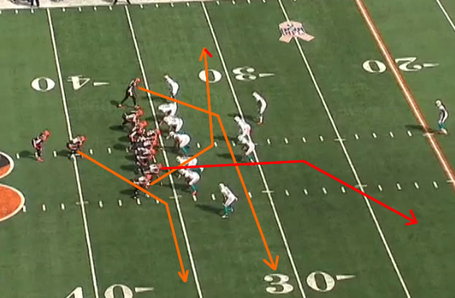 Underneath, everything was chaos. Further out, Gresham was wide open. 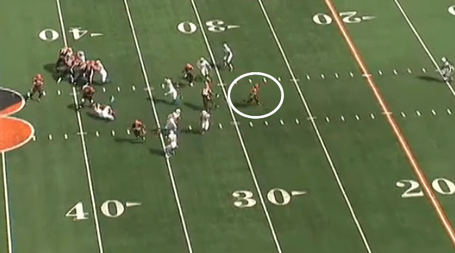 Dalton quickly identifies the open man and drops the football into Gresham's hands, who caught the football while in stride.

Gresham picks up 20 yards and the first down. Eventually the Bengals offense would stall at Miami's seven-yard line, forcing Mike Nugent to convert the 24-yard field goal to take a 6-0 first quarter lead over the Dolphins.