Top Plays of 2012: The only Bernard Scott entry

Bengals running back Bernard Scott has been a frustration with Bengals fans. But that doesn't mean he hasn't shown flashes.

Share All sharing options for: Top Plays of 2012: The only Bernard Scott entry

At one point. former sixth-round running back Bernard Scott was the ridiculously talented change-of-pace back that philosophers of the two-back system crave. A big-play threat from anywhere on the field, Scott could sprint away from defenders either as a runner or receiver. Expectations were huge, but have long since deflated into frustration.

But he had his moments. Even last year when he played two games. Such as his 29-yard sprint against the Miami Dolphins that we alluded to during a previous top plays posting that highlighted Jermaine Gresham's big league fourth down conversion.

With a 3-0 lead, the Bengals have first down from their own 28-yard line with 5:56 remaining in the first quarter.

Andrew Hawkins comes into motion from right to left, crossing the quarterback just as Andy Dalton planted his pivot. The motion caused the weakside backer to stray, allowing some room for a possible cutback. Instead of faking the handoff, Dalton quickly pitched the football to Bernard Scott on a sweep to the right.

As soon as Scott began to look upfield, he was already under assault.

Scott fought through the tackle, but saw congestion in front of him. So Scott stretched and stretched, until he found the opening highlighted by insane bulldozer impressions from Dennis Roland and Andre Smith. 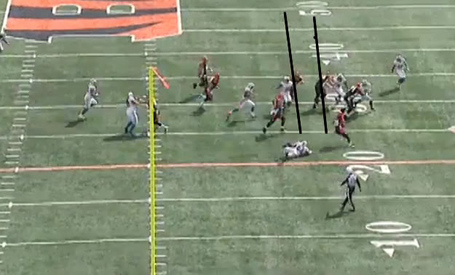 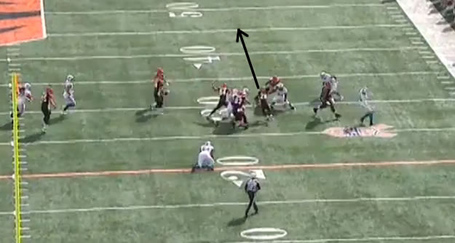 Even more impressive was the amount of missed tackles that Scott forced during his 29-yard sprint. By our count, it was five missed tackles. 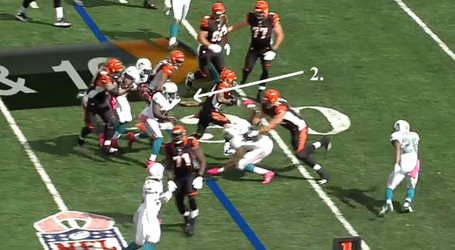 Eventually Scott was brought down at Miami's 43-yard line. With help from a Jermaine Gresham fourth down conversion, the Bengals would take a 6-0 lead at the end of this possession.