Top Plays of 2012: Jermaine Gresham dominates after the catch

Jermaine Gresham gained 427 of his 744 yards last year after the catch. He had two huge plays that contributed to that YAC dominance.

Share All sharing options for: Top Plays of 2012: Jermaine Gresham dominates after the catch

Former 21st overall pick Jermaine Gresham has been a common target for criticism among Bengals fans after his ineffective effort in the wild card loss to the Houston Texans. As we recap the good times of 2012, it behooves us to remember that Gresham is actually a pretty darn good football player. Because I like statistics a lot, a fun fact is that Gresham's 11% drop rate last year was better than Rob Gronkowski's and Aaron Hernandez's and Jimmy Graham's. Just saying.

In the first quarter of the Bengals' second encounter with the Cleveland Browns last year, the Bengals got off to a hot start before their four turnovers cost them the game. On Cincinnati's second drive, after Michael Johnson intercepted a Brandon Weeden deflection, the Bengals faced a third and two from their own 45.

The Bengals showed a three receiver look with Gresham split out wide right in single coverage with linebacker Craig Robertson. Advantage Gresham. The Browns have two safeties deep, and deploy press coverage up front. D'Qwell Jackson shows a potential A-gap blitz, but will follow Brian Leonard into the flat. It looks like "Cover 2 Man Under" at the time of the snap, but ends up looking more like Cover 1 with one safety rolling into center field and the other biting on Hawkins' comeback route. 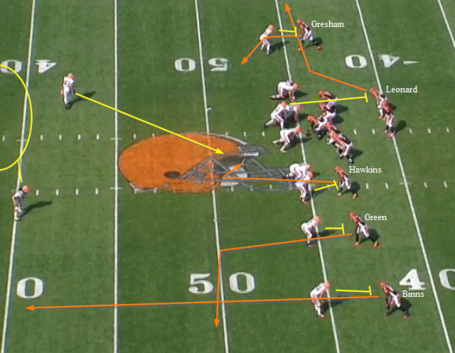 The only player on Cleveland's secondary that knows where Dalton is going with the ball when he's ready to fire is Robertson, who Gresham beat to the inside on a quick slant. If Jackson was looking into the backfield at this point, there might be trouble, but he needs to focus on catching up to Leonard to prevent a dump-off from picking up a first down. Meanwhile, the crashing safety could have taken a big shot on Gresham if he weren't locked in on Hawkins.

Instead, moments after Gresham catches it, he's got a little bit of space to operate. Robertson is the only one with a shot at a quick tackle after the catch.

Unfortunately for Robertson, Gresham is too big and strong for a high tackle attempt. Gresham gets a stiff arm extended and Robertson has no shot at the solo tackle, but Usama Young comes into the picture and looks like a good bet to slow Gresham down. 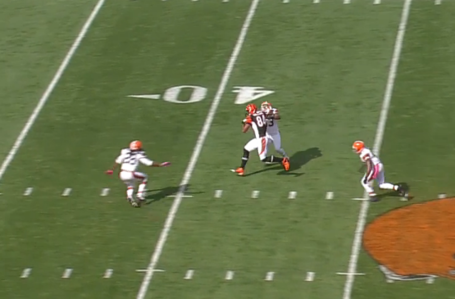 But magically, Gresham manages to sidestep Young's (poorly angled) attempt to bring him down, slightly running the Browns' defenders into each other in the process. T.J. Ward gives chase from behind, but is slowed down by the clutter of missed tackles ahead of him. Robertson and Young go down and Ward has to make up at least six yards with only 31 of them between Gresham and paydirt.

No one gets close until Gresham has "galloped", in the words of the color commentator, to the five. Gresham moved the ball to his right arm and gets his hand on Joe Haden's helmet as Ward has finally caught up. 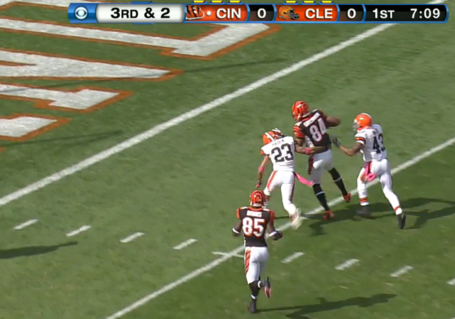 Gresham pushes Haden down, and Young ends up high as the Browns defensive backs start to bring Gresham down - but it will be too late as the mighty tight end breaks the plane before his knee touches the ground. 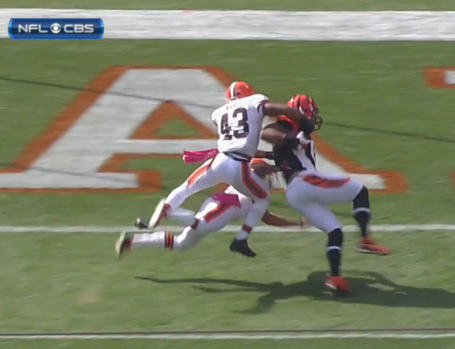 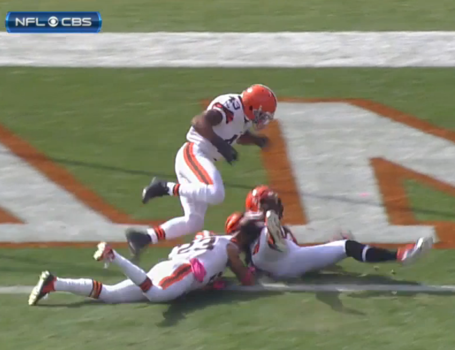 Against the Broncos, the Bengals came out of halftime by giving up a kickoff return touchdown. Down 17-3, the Bengals needed to respond. On second and eight from their own 37, the Bengals split Gresham out in the slot between A.J. Green (outside) and Andrew Hawkins (inside). The Broncos bring pressure. 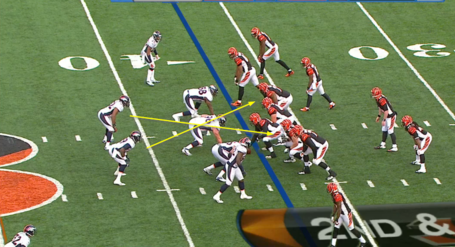 Andy Dalton has a clean pocket, but can't find an open man before the relentless Broncos pass rushers flush him out of the pocket. 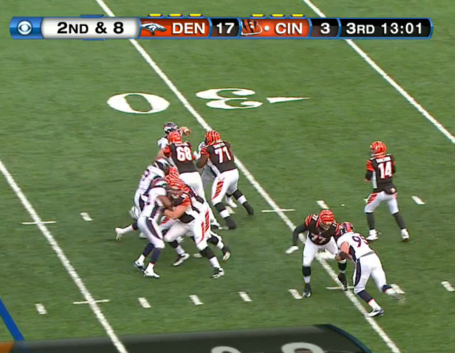 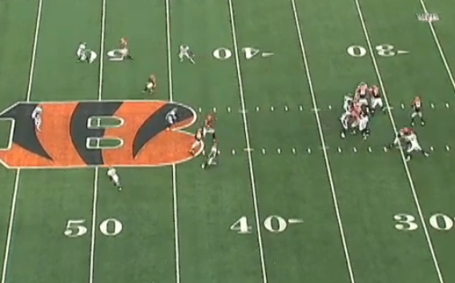 Dalton manages to escape, and the defender responsible for Gresham for some reason has decided to abandon his assignment and chase Dalton. Gresham will be wide(r) open in less than a second. 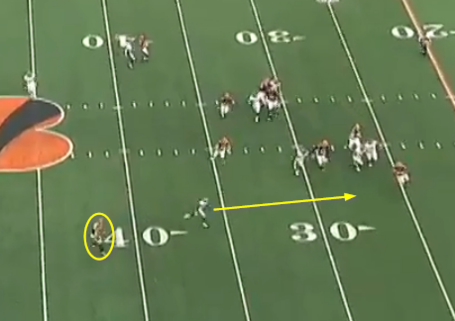 With a great on-the-run-pass on-the-money, Gresham has the ball 10 yards down field with 10 yards of space any way you look.

With a block from Andrew Hawkins and the elegance to tightrope down the sideline, Gresham evades the first wave of tacklers. 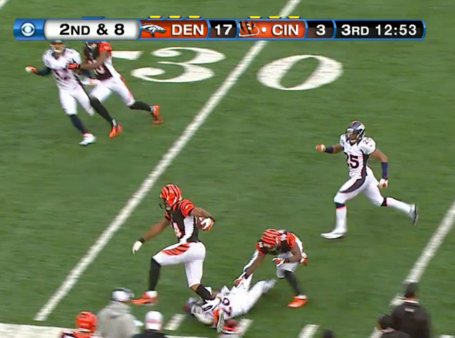 Another great block from A.J. Green, Champ Bailey is the Broncos' last hope of preventing a touchdown on this play.

Unfortunately for the Bengals, Bailey has really great fundamentals, and he'll bring Gresham down at the 12 yard line. The Bengals would go on to score two plays later on an A.J. Green touchdown reception.