Film Review: Emmanuel Lamur is much better than you think

While doing some film review on other subjects, we wanted to make sure that you know exactly what the Bengals have in the other undrafted free agent linebacker from 2012.

Share All sharing options for: Film Review: Emmanuel Lamur is much better than you think

Clearly Vontaze Burfict received (and completely earned) every praise from Cincinnati's crop of rookie defensive players last year. He didn't just lead the team in tackles; he dominated with 174 tackles. Yet the Bengals signed another undrafted free agent linebacker last year, that, if not for Burfict, would have sustained significantly more playing time last year. And he may prove to be just as good.

More: Getting to know James Harrison Impact of Sanu in the backfield

With 4:39 remaining in the first quarter against the Denver Broncos, Peyton Manning settles into shotgun from Denver's own 23-yard line. Cincinnati's defense counters with a base 4-3, with Lamur at SAM (double-tight with two receivers on Lamur's side) hovering over the line of scrimmage. 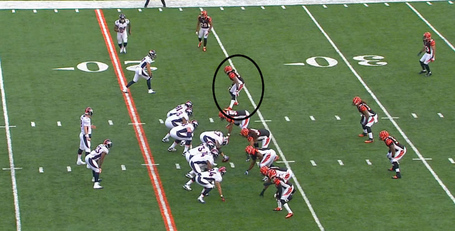 Tight end Jacob Tamme, at the bottom of your screen, ran a cross over the middle while Lamur dropped back into coverage. Joel Dreessen, the left tight end, bolted towards the left sidelines where Leon Hall picked him up. Eric Decker and Demaryius Thomas ran deep routes. 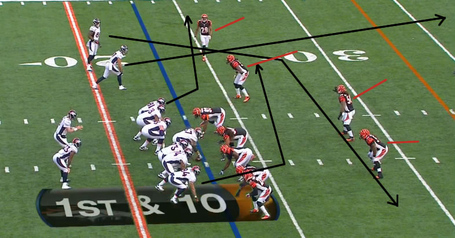 With Decker, Thomas and Dreessen causing significant traffic around Lamur, it would be easy for a rookie to lock into one of those routes. He doesn't.

In fact, by staying home, Lamur was able to angle off Tamme's route, or at the very least stuff the tight end from from gaining any momentum after the reception. 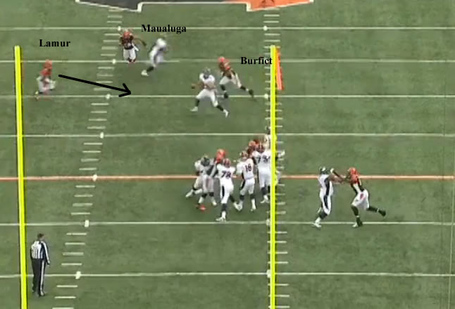 The reception was made, but Lamur ensured that Tamme acquired no momentum with a decent knock.

With under seven minutes remaining in the second quarter during the same game, Lamur may have displayed his most impressive act of athleticism to date. The Broncos have second and ten, a down that would favor a passing situation. Lamur is covering wide receiver Eric Decker in what appears to be man coverage.

Not only did Lamur keep pace with the wide receiver down the seam, the linebacker put himself into position to nearly intercept the football.

Clearly Manning thought he had the match-up between a linebacker and one of his best wide receivers. Lamur equally established himself to Bengals fans, considering that this was his first game in his career.

We move forward to the 12 minute mark in the fourth quarter against the Giants. One point we need to highlight with Lamur is that he's showing consistency in regards to his assignments. Staying home during zone coverage. Doing your job.

The flats clear out to Lamur's left and the linebacker starts zoning into the backfield. Running back Andre Brown chips Robert Geathers and enters the flats.

Lamur immediately picked him up to make the open field tackle. Instinct, responsibility, doing your job.

Then you have to marvel at the confidence that Cincinnati has with Lamur's athleticism. It's third and ten from the Bengals 41-yard line with 7:15 remaining against the Dallas Cowboys. Seconds before Tony Romo takes the shotgun snap, Lamur sprints away from the line of scrimmage while Reggie Nelson approaches it from the opposite side. 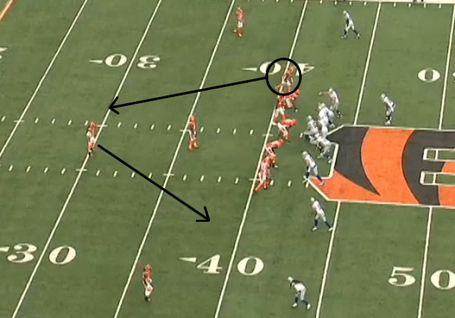 That leaves Lamur, a linebacker, playing center field as a safety. 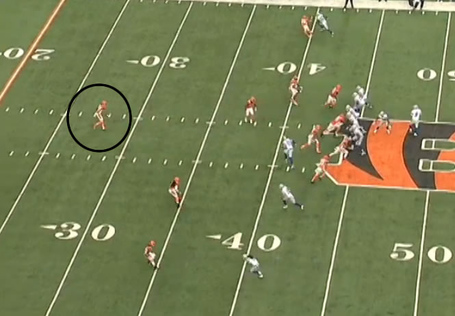 And he does it well. 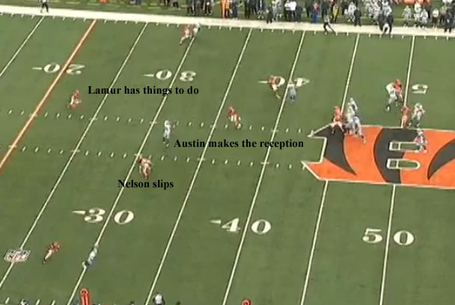 The Cowboys converted a third and long and on the very next play, Romo fired a rocket through traffic (and a diving Leon Hall) to Dez Bryant, who scored a touchdown to reduce Cincinnati's lead to 19-17.

Lamur's pursuit during the opposing offense's ground game is equally as aggressive.

With 9:18 remaining in the first quarter against the Philadelphia Eagles, Bryce Brown takes the handoff from Nick Foles. Michael Johnson and Robert Geathers disrupt their blockers at the point of attack, forcing Brown to bounce outside while Lamur is taking on his own blocker.

Lamur tracked him down, dropping the running back for a two-yard loss.

We move forward to the 5:45 mark in the second quarter. Lamur takes on the pulling guard, though maintains outside position. 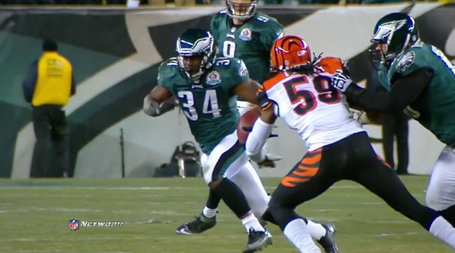 Lamur easily disposes of the block to wrap Brown's feet after a three-yard gain.

This kid is special. He only contributed with 136 snaps on defense last year after being signed to the team's 53-man roster in week nine. He's fast enough to cover receivers, capable enough to play deep safety and big enough to finish off ball carriers.

As he adds bulk to play bigger within the box, there's a feeling that Lamur could be as good as, if not more dynamic than Burfict. Too bold?