Film Review: Not pushing every blame at Rey Maualuga's feet against the Texans

We took another look at the Bengals loss to the Houston Texans and while Rey Maualuga was awful, he wasn't the only one.

Share All sharing options for: Film Review: Not pushing every blame at Rey Maualuga's feet against the Texans

We know that Rey Maualuga has been struggling in the past, highlighted against the Houston Texans during the Bengals wild card loss in January. Though our curious nature wonders how much he should be blamed, considering that ten other defensive players had moments that they'd like to take back.

Don't get me wrong. Maualuga stunk.

From the Texans seven-yard line with 11:31 remaining in the first quarter, Houston offers a double-tight formation with Kevin Walter and Andre Johnson wide left. Owen Daniels is on the left, with linebacker Rey Maualuga assigned.

It's a simple crossing route, which killed the Bengals (not just Maualuga) all afternoon. Hell, it killed them all season. Maualuga, unsure which direction Daniels was taking, was already in a compromised position, feeling the weight of his feet rooted into the ground. Daniels went right. 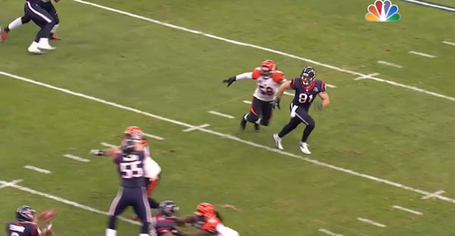 More than enough separation for an NFL quarterback and tight end.

With seven minutes remaining in the second quarter, the Texans had the football at their own 41-yard line on second-and-nine. Garrett Graham ran a crossing pattern, flashing across Maualuga's front. 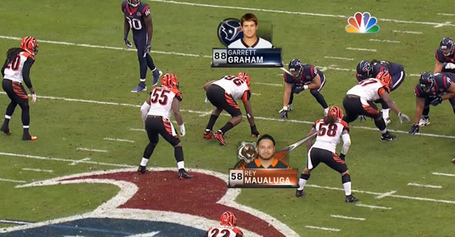 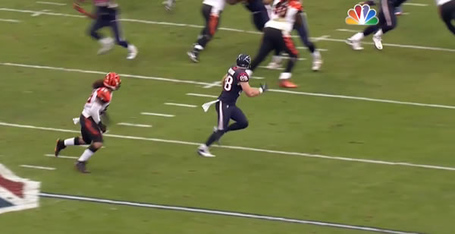 After a while the Bengals simply stopped trying to cover Daniels with a linebacker, usually lining up Nate Clements (as a safety for the injured Chris Crocker) over the tight end.

Maualuga's issues continued on the ground. With 8:52 remaining in the second quarter, Matt Schaub delayed the handoff to Arian Foster, leaving a one-on-one between linebacker and running back.

Foster puts on a move totally unexpected. He goes to the right.

Maualuga didn't even touch him. 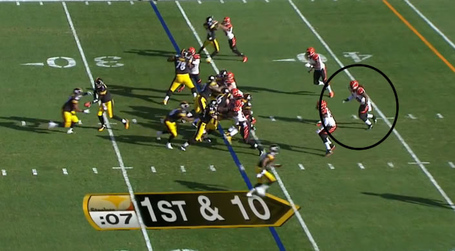 It appeared that he had a good angle initially...

But in reality, Dwyer outpaced Maualuga towards the sidelines because Maualuga just didn't react.

But then again, what the hell is Vontaze Burfict doing? Does it appear to you that Terence Newman is going to factor into the play?

Thankfully nothing was made of it, after Michael Johnson single-handedly dropped Dwyer on consecutive runs (combining for three yards) and Geno Atkins sacking Ben Roethlisberger on third down, the Steelers punt.

However the Bengals struggles defensively should have never been placed entirely at Maualuga's feet.

With 9:39 remaining in the first quarter against the Texans, it was Michael Johnson's disastrous attempt to contain the edge that led to Keshawn Martin's 16-yard end-around. 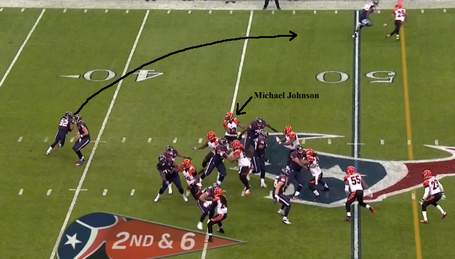 Or Vontaze Burfict's failure to chip off a block during Arian Foster's 17-yard earlier during the same possession (Maualuga was on the other side of the field with two blockers).

Or Nate Clements allowing all three receptions against tight ends he covered for 49 yards receiving. Or no one paying attention to Andre Johnson sitting in a significant gap within zone coverage which led to a 19-yard gain.

Seriously. How does Johnson not have at least one body hanging off his hip? 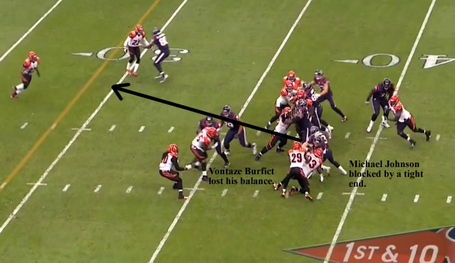 We can't blame Maualuga's inability to cover on the player himself either; he has limitations like most players and that's one -- though significant. In fact we have to question a coaching staff that continued to insist that he should be placed on the field during obvious passing downs (second/third and long).

With four minutes remaining in the first half, the Texans were just outside the Bengals ten-yard line with first-and-ten. Geno Atkins held his lane and Robert Geathers pressed down the line of scrimmage to hold Arian Foster to a one-yard gain. 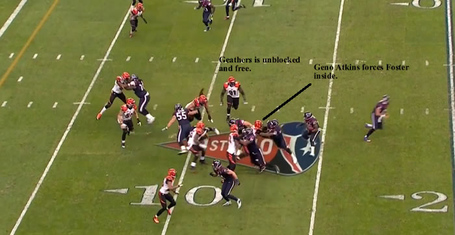 Reggie Nelson lowered his shoulder into Owen Daniels gut on the ensuing second down, limiting the tight end to a six-yard gain, leaving a third and two. Geno Atkins powered through his blocker, forcing Schaub to uncomfortably throw the football off his back foot to Andre Johnson on third down, who was plenty open with Adam Jones covering somewhere nearby. In fact it was a fairly catchable throw; we'll chalk that up is rushing the throw before anyone was ready. 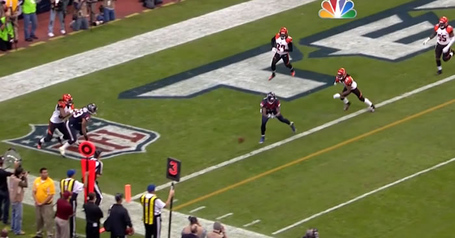 Let's not mistake our perspective. Maualuga is facing his own defensive demons, largely related to reaction and general confidence. It appears that he's not entirely comfortable following his instincts, which supports the coaches public criticisms of Maualuga being unable to ditch bad plays from his mind.

That being said. When the Bengals were bad against Houston, they were bad. Together.