Andy Dalton has a well-documented tendency to crumble under pressure. Here are some examples of how Dalton dealt with pressure last year.

A few weeks ago, Brennen wrote about Andy Dalton's tendency to let pressure turn into sacks, breaking down Pro Football Focus data that painted an ugly picture for the Bengals quarterback.

On a basic level, it's intuitive that pressure is strongly correlated with bad quarterback performance. In four of his six worst passing games of the year, according to PFF, Dalton was pressured at least 11 times. In addition, PFF ascribed fault to Dalton on nine of the 42 sacks he took.

When I started looking into instances where Dalton may have abandoned a clean pocket, I thought very clearly of Dalton's habit of taking his eyes off of his receivers and focusing on the trenches. He would miss out on open receivers and more than a few times ran into the waiting arms of a defensive lineman.

In two plays against the Browns, the Bengals had dramatically different outcomes when Dalton didn't get rid of the ball in the pocket, but as soon as Dalton stops looking to pass downfield, more often than not the offense does not win the play. That happened a few times in the wildcard game against the Texans last year, and we will look at one of those plays.

In these two plays, one against the Browns in week two, and one against the Texans in the wildcard game, Andy Dalton perceived pressure that wasn't there, and instead of pulling the trigger on an open pass, he abandoned his pocket.

Would you leave this pocket? Looks pretty clean to me. Jermaine Gresham might even be getting open on that seam route, and it looks like Andrew Hawkins is going to be open on his out route. 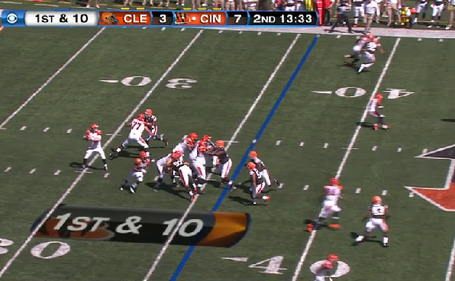 Here's another look. That pocket is as cleans they come as Dalton finishes his drop and looks at Gresham and winds up to throw the seam route. From this view, you can more clearly see that Dalton has plenty of time to let the routes develop for a bit longer. 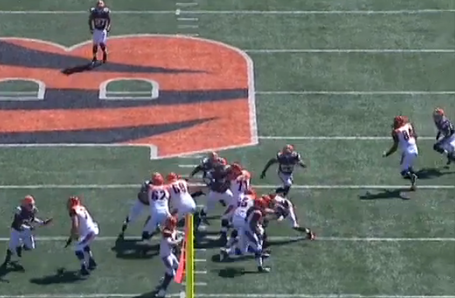 From another angle, we can see that Dalton most likely only made one read on this play. He might not think Gresham has enough separation, or that he can get the ball above the blitzing linebackers on the right. However if he had progressed across the field, especially through that beautiful throwing lane to his left, he might have at least found an open Hawkins. 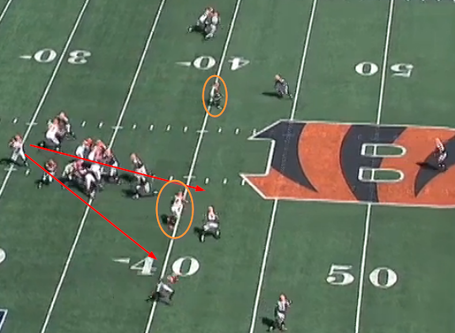 Instead, he tucks and runs into traffic. I'm not terribly sure where Dalton intended to go here. It's not clear what he saw, but it appears that he felt pressure on both edges and wasn't comfortable stepping up into the remaining pocket. If he's reading the left side of the coverage here, he didn't pull the trigger. 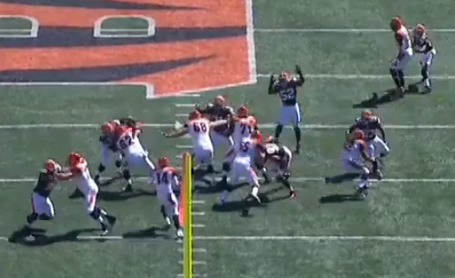 Instead, he begins trying to wade through linemen to find a gain on the ground. From this point, you can tell that he doesn't have much room to run. 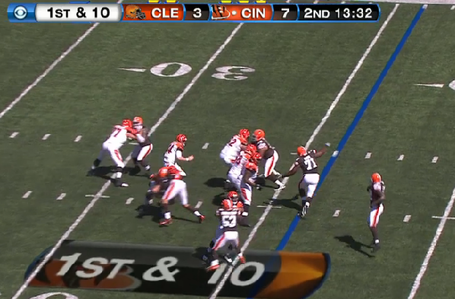 Dalton ends up going down for a one-yard-loss on the play as he fails to find a running lane or dump the ball off at the last moment. From the time he moves off his first read, it seemed like a sure thing he was pulling the ball down. He felt edge pressure that wasn't quite there yet and missed potential gainful throws as a result. 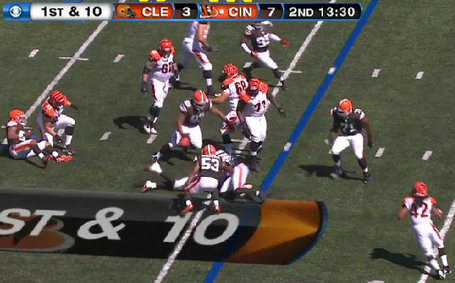 On the polar opposite of collapsing under pressure, one of the most memorable unscripted successes of last year came later in the week two contest with the Browns. On this play, Dalton escapes real pressure from the right side. The Bengals have Hawkins, Armon Binns, and A.J. Green at receiver on the play with Gresham at left tight end and Brian Leonard in the backfield. 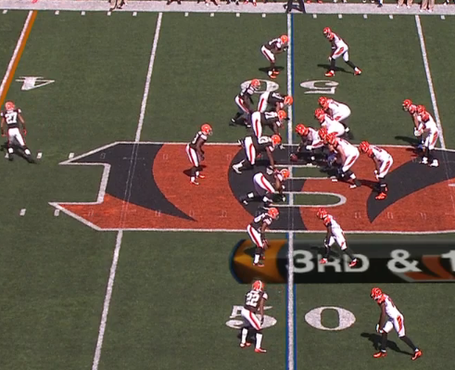 Dalton's initial read on the left side of the field doesn't find any open receivers, as Green is bracketed deep. 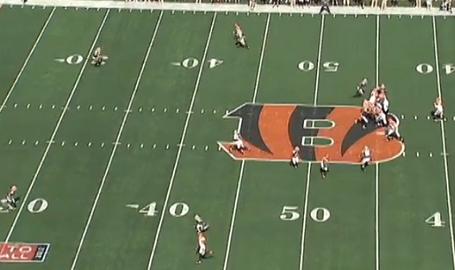 As he progresses, Dalton quickly faces pressure on the right side of the line of scrimmage and at this point could probably have dumped it off to Brian Leonard if he saw him. 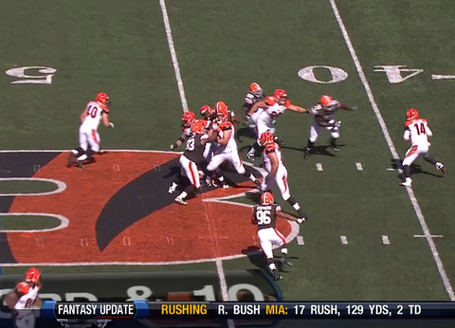 Instead, Dalton gets around the pressure on the edge and Hawkins slams on the breaks and digs into a wide open spot in the defense. Dalton needs to decide if he wants to dump it off to Leonard, but Hawkins has already stopped and cornerback Trevin Wade is just beginning to slow down. 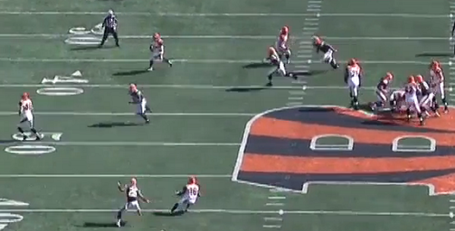 Dalton delivers a strike, and just look at how open Hawkins gets by the time Dalton delivers the pass. He has a lot of space to operate, and is a deadly weapon in space, as the Browns are soon to discovery. 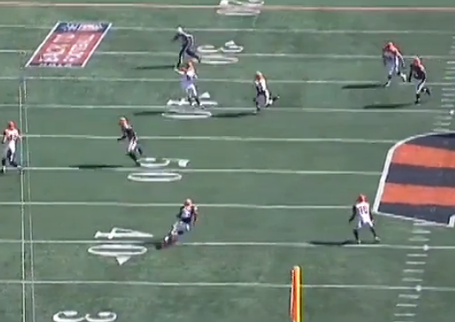 A few jukes, and a Leonard and Green block later, Hawkins is in the endzone on one of the most exciting plays of the Bengals' 2012 season. 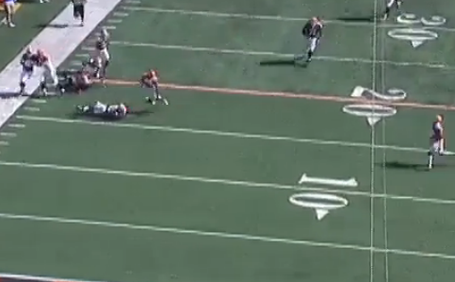 In this case, Dalton did a great job of feeling pressure, getting out of the pocket, and giving Hawkins a chance to make a play. The Bengals only won this game by 7. Despite a glossy passer rating of 128.2 on the game, Dalton fared poorly in PFF's grading system due, in large part, to missing reads and taking unneeded sacks.

Folding to Pressure in the Playoffs

Against the Texans, the Bengals made plenty of mistakes and deserved to lose the game with the low quality offensive execution and gameplan that didn't target A.J. Green until the second half. On this fourth quarter play, in the most important game of the year, Dalton's nasty habit reared its head.

From the sideline camera, it's not obvious that Dalton has a nice pocket, but from behind the play, you can see that the Texans pass rush doesn't pose an immediate threat to Andy Dalton as he scans the field for a receiver about one-and-a-half seconds after the snap. Jermaine Gresham is running a corner route while Andrew Hawkins and Brandon Tate are running in routes. 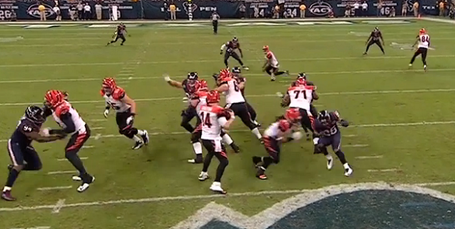 Here's another look - the Texans' left corner looks like he's going to take Gresham as Tate and Hawkins have space underneath. Dalton looks like he wants to unload, and from here it looks like he has a few decent options on this second-and-ten. 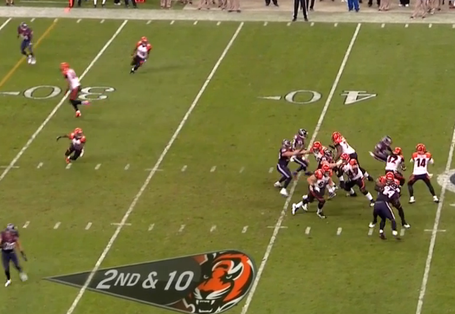 Instead, as Dalton steps up, he drops his arm and is preoccupied with the mess in the trenches in front of him - though his line has created a relatively safe space for him to operate. Hawkins is safe with room to operate, Gresham is likely covered by the Cover 2 (looks like a cloud of intermediate zones to me), while Tate is wide open in the space created by Gresham's route. 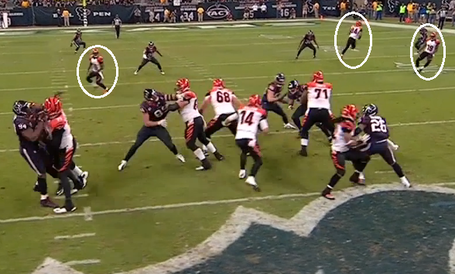 Dalton, at this point, can't make any of those throws. He gets hit by JJ Watt, and Brooks Reed cleans the play up as Dalton takes an unneeded hit and gives up passing opportunities by bailing out too early (highlight below not mine - that's NBC's handiwork).

The two plays where Andy Dalton needlessly abandoned a solid pocket are examples of the kind of play that drove Dalton's critics mad last year. Marvin Lewis spoke frequently last year about finding the ad-hoc, improvised big plays. They didn't happen much, but that Andrew Hawkins touchdown was mindblowing to watch unfold on live TV.

But improvised plays are not exactly reliable plays. I would rather see Dalton curb his skittish instincts that he so often showed last year and trust the pocket when it's there. He needs to get back to displaying the elite anticipation that excited us so much his rookie year. On these plays, he had opportunities - even on his primary read - to complete passes and instead took hits near the line of scrimmage unnecessarily.

I plan to more closely tabulate Dalton's reactions to this kind of pressure in 2013. It will be interesting to see how frequently he drops his eyes and/or arm when he feels pressure that's not there yet, or not coming, versus how frequently he stands tall and progresses through his reads. As he gains experience, I hope to see him less frequently abandon clean pockets or bail out of potential plays.

We've all seen Dalton stand tall and make excellent throws. The key is for him to be more consistent and develop a better feel for the pocket, and for imminent pressure. I think he has the potential to improve these skills, as he primarily relies on feel and anticipation when he's going well. Year three is a big opportunity for Dalton to quiet his critics and prove that he's not "just a second round quarterback". He can can prove that he can take the Bengals deep into the playoffs and to a Superbowl. He just needs to refine his pocket presence first.