The firing of Sam Wyche and Bengals news and notes

We take a look back at the firing of Sam Wyche, which he disputed, as well as other news and notes.

Share All sharing options for: The firing of Sam Wyche and Bengals news and notes

It all spiraled out of control on Christmas Eve in 1991 -- a date that literally set the tone for the next 15 years. During a meeting between then head coach Sam Wyche and President Mike Brown, something happened. Wyche was leaving and the CIncinnati Bengals were about to collapse into one colossal failure of an era, far longer than anyone had expected. Reportedly at the time, when the Christmas Eve meeting was over, two conflicting stories emerged. The Bengals said Wyche turned in his resignation while Sam Wyche denied that version:

"I was simply fired by Mike Brown at a meeting today," Wyche said in a statement released by his lawyers. "I have no idea why the Bengals have chosen to announce this as my decision to leave."

The method of his exit was important.

Because if Wyche was fired, he was due $1 million for the two years remaining on his contract, whereas if he resigned, he wouldn't see a penny of that money.

Wyche's residency in free agency was short-lived. Once Richard Williamson left the organization after winning only four of 19 games, the Tampa Bay Buccaneers hired Wyche, who is partially responsible for drafting players like Derrick Brooks, Warren Sapp and John Lynch.

The Bengals organization was disastrously buried under cloud and ash for an entire generation, strongly felt today in the personas of many fans that groan when they see the Bengals momentarily struggling, or failing to sign free agents like Mike Goodson. The fall. The decline. Let's nominate Christmas Eve 1991 as the date it began.

The immediate dominoes that fell were significant.

The initial firing/resigning of Sam Wyche, along with the team hiring the unproven and unqualified David Shula, severely fractured Boomer Esiason's loyalty to the Bengals.

Esiason slipped into Mike Brown's office afterwards and demanded a trade. Brown agreed to capitulate to his demand, provided that Boomer stick around for another season while the team grooms a replacement franchise quarterback -- because they're totally in stock at Kroger.

Good on his word, Brown drafted David Klingler and after the 1992 season, traded Esiason to the New York Jets for a third-round pick.

Wyche is remembered for several achievements in Cincinnati. He's only one of two head coaches to take the Bengals to the Super Bowl, he's second all-time with 66 wins in franchise history and the players loved him. But as fans, there's no moment greater than this.

A.J. Green, Mohamed Sanu, Marvin Jones and Andrew Hawkins are locks for the 53-man roster, provided the team avoids any unfortunate injuries. The coaching staff loves Cobi Hamilton and unless someone knocks him off the return-man throne, Brandon Tate is staying. There isn't much room if you're a wide receiver not named one of those players.

Plus Ryan Whalen would be your seventh receiver, if the Bengals decided to mirror their roster chemistry from 2012.

"He’s a tough kid, he’s got great quickness in space, and he’s got a good feel for the game," Bengals offensive coordinator told Dan Hoard with Bengals.com. "Everything that he displayed at Ohio State you can see on the field. And the one thing obviously that you can’t see is his toughness. He’ll catch it in a crowd – we know that. He’s got really good hands and runs very good routes."

However Sanzenbacher isn't worried about his chances, or the players he has to fight to earn a spot on the 53-man roster this year.

"You can’t really think about the numbers," said Sanzenbacher per Bengals.com "We’re in OTAs right now for one, so it would be dumb to play the numbers game at this point. As cliché as it sounds, you just have to take advantage of your opportunities."

Cincinnati claimed Sanzenbacher off waivers last Christmas after the Chicago Bears released him the day before. He was inactive against the Baltimore Ravens during the regular season finale, as well as the wild card game against the Houston Texans. 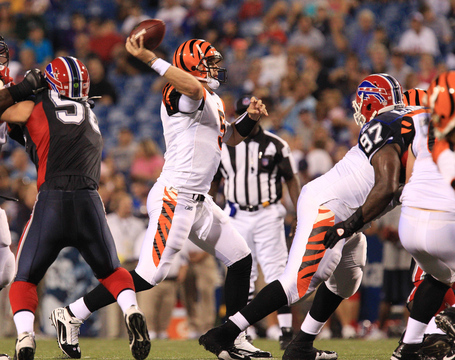 Former Bengals quarterback and, as far as we know, current little brother to Carson Palmer, Jordan surfaced during a Dan Pompei report that highlighted JaMarcus Russell's scheduled workout this Friday in Chicago.

From all indications, the Bears are very pleased with backups Josh McCown and Matt Blanchard, and are not looking to add a fourth. Rather, they are likely evaluating players who are available in the event that an emergency backup will be needed at some point down the road.

Palmer spent three seasons with the Bengals from '08-'10 with a stint in Jacksonville last year. The depths of Jordan's career has been all of 15 passing attempts, completing 10, including two picks in 2008 (but then who didn't royally suck that year anyway).

Palmer actually entered training camp with the Bengals in 2011 with reports observing that he looked "sharp", but it was next-to-impossible that Jordan would stay.

Considering that Cincinnati signed Bruce Gradkowski and drafted Andy Dalton, along with the league dropping the emergency quarterback roster exception, there was no need having him. Plus with Carson playing the retirement game of chicken, having a Palmer brother may have been somewhat distracting (for like a minute if that).

+ Nice story on Michael Johnson and Carlos Dunlap taking Margus Hunt under their wings, even impressed by what he brings.

"Shh….impressive. Very, very impressive. I'm glad we’ve got him," Johnson says. "Look at him. He's got all the tools. Big. Fast. Strong. And we've got a good group of guys to come in and learn with and grow with because we're still learning and growing. He can jump in and get on this train and he can watch all of us."

+ Joe Reedy with the Cincinnati Enquirer pools all of his twitter responses to questions in a mailbag. The most interesting note? Don't expect Thomas Howard in a Bengals uniform -- perhaps no uniform. The reason? His surgically repaired knee.

+ Cleveland Browns running back Trent Richardson is expected to be held out until training cam. Cleveland is "worried" that a leg injury could develop into a stress fracture, tweets Will Burge with ESPNCleveland.com.

+ People confronted Aaron Rodgers for spoiling a mega-plot point in the Game of Thrones, rightly pointing out that you have 24 hours to watch any show after it aired before you can complain about spoilers.

The 1988 Cincinnati Bengals: Re-Visiting A Great Team A Quarter Of A Century Later