Time to put away the shovel that buried the dead horse

There are stories that tend to take greater precedence during the offseason that normally wouldn't. And we're all to blame.

Share All sharing options for: Time to put away the shovel that buried the dead horse

We talk Bengals, but first an evolving update.

As we seek an evolution from within our corner of the internet-sphere, curiosity grabbed us with a white-knuckle grip. How should the bacon evolve? Are we ready for a new name yet (please)? Those of you that responded on Thursday (and thank you for your input) preferred a morning review from the previous days stories, while continuing to whip out content as much as possible throughout the day. For those of you that gave up after the 3,000th word during yesterday's bacon, the question surrounded our format -- is there a preference of lump sum postings or SLAM YOUR FACE WITH CONTENT ALL DAMN DAY, assisting with the degradation of the United States economy by ensuring our working class Bengals fans are kept occupied?

We'll try it. Why not today? After my day job forced my staff writers to add an extra scoop in the coffee maker, even yours truly had to play catch-up.

Jay Gruden going back to basics with Andy Dalton. 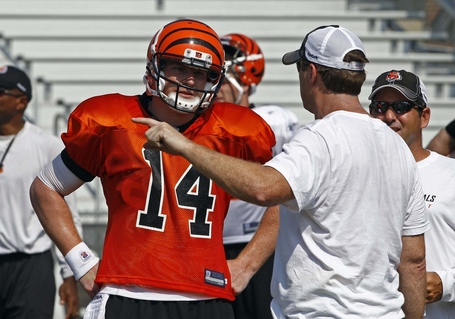 There's an appreciation when the Cincinnati Bengals offense practices. They're not practicing against young second-tier or third-team caliber scrubs. Andy Dalton and company are squaring off, every day, against a defense that's regularly been ranked in the top-ten. Most offenses around the NFL will practice against the first-team defense. However the offense is facing a Mike Zimmer mad-scientist-scheme led by the league's best defensive front.

However one of the more interesting undertones from Jay Gruden's comments on Thursday wasn't so much about the impressions that Bengals offensive coordinator held after three weeks of OTAs. It was Andy Dalton.

"We're getting accomplished what we wanted. We've seen a lot from a defensive standpoint," Gruden said. "Andy has gotten a lot of reps. He's working through some things and it is only his third year. We're going back to basics but throwing a lot at him. We're happy with the progress the offense has made."

It's the unreal level of attention that Dalton has received this offseason. Alright, so maybe we're somewhat caught up in the act, at the very least holding off the water hose from a fire that's still quite manageable. Focused attention isn't so much Dalton as a bad quarterback, rather the application of third-year quarterback that needs to make sizable improvements. But honestly, we've not only beaten this dead horse, we've buried it... then buried the shovel. 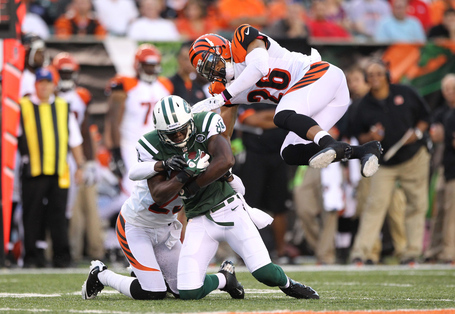 Divisive fans simply explode at the impression of Mays, with little middle ground remaining for everyone else. Either he sucks without any possibility to grow, or he's the greatest thing since football was created (some of you are completely wack with goo-goo eyes for Mays and others are beyond the stage of forgiveness, even if Mays rebounds).

But to each their own.

Mays (who San Francisco basically said to Cincinnati, please take him... a seven... for next year? Perfect). You can either apply faith to a player that hasn't earned it, or place his picture on a dart board.

What's important is that Mays is being granted another opportunity to earn his place at Mike Zimmer's table. Entering the final year of a four-year rookie contract, this could be Mays' last chance to claim any starting job, maybe during his NFL career (except when others are hurt). Frankly it doesn't matter what we say. It's all on him and whatever criticism/praise that's attached to his name at this point is completely earned.

Much ado about nothing, or waiting to unleash opinion? 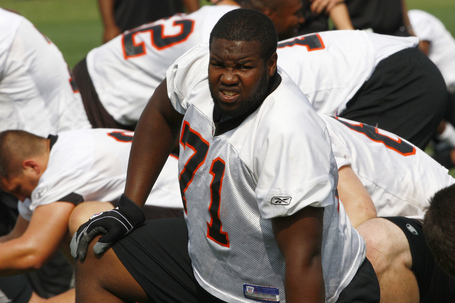 Bengals head coach Marvin Lewis told reporters following practice on Thursday that he expects Andre Smith to attend next week's mandatory minicamp. Secretly we're sure Lewis is offering two curse-filled rants, which we'll keep clean: 1) Quit asking me about Andre Smith 2) He better damned well be here. Well, as clean as we could be.

Smith is a former tenant in the Marvin Lewis dog house for questionable decisions related to his conditioning, motivation and health.

After undergoing a procedure following the 2009 season to clean and strengthen the foot that he broke during a preseason practice, Smith required eight months to fully rehabilitate. At one point Lewis questioned Smith's professionalism.

"Andre’s going to figure out how to become a pro and do things the way it’s asked to do all the time," Lewis said in August of 2010. "Hopefully he continues to do it in a timely fashion. Because otherwise, I’m not going to go through this year in and year out."

Obviously Smith's story has blossomed and there's a sense of pride in that he eventually proved himself. Most of us are strong supporters of Smith, even when the team was negotiating with Smith a couple months ago -- despite public interest from NFL teams sounding like dead crickets.

We're just hoping to put a cap on this story, which is really only highlighted at this point during your typical offseason. Otherwise, let's talk bowling. 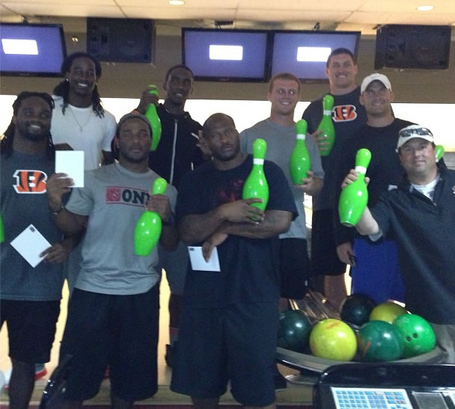 + SITE NOTE: If you haven't yet, make sure you listen to the season four premiere of Who-Dey Weekly, hosted by Nick Seuberling with Anthony Cosenza. Next week will be the show's 100th episode; a tremendous milestone in a field that absorbs the romance but fails to sustain it. Who-Dey Weekly remains the top Bengals-related PodCast on the internet.