With the departure of Pat Sims, the Bengals have a pair of second-year players that will replace him. We take a look at Devon Still.

The departure of Pat Sims to the Oakland Raiders left a vacancy at defensive tackle that will encourage competition between a couple of second-year players. Though disregarded by some, Sims, a blue-collar worker that fit well in Mike Zimmer's defensive scheme, was clearly a run defensive specialist. However it was more than that. Let's break down the Bengals production when Sims was on and off the field (with an injury).

One may allow a correlation if they choose, or fire a bullet list of talking points countering the implications of his departure. Perhaps it related to the competition, or how others were playing at the time he was (or wasn't).

In the end Sims left and the fact is, he is/was just as replaceable as any player playing in the NFL.

Now the Bengals, with their wisdom and foresight (did you gag?), actually prepared for Sims' eventual exodus, and perhaps for a probable Domata Peko departure within a few years. Cincinnati drafted Devon Still and Brandon Thompson in the second and third rounds respectively during the 2012 NFL draft. Provided injury isn't an issue and neither self-destructs, they will play a significant role this year.

And While Thompson hasn't established any sample or base-line on what to expect in the NFL, Still, who replaced Sims (PUP last year), has. Watching some of the film from last year, it's clear that he a road before him but there were bright spots that makes you think, this kid could be an all-around tackle.

Graded largely as a better pass rusher, Still has attributes that suggests his ceiling will be greater than what Sims' has ever done. Terrific at finding the ball carrier, showing patience while keeping blockers off his body, shows an ability to counter the run and navigate through traffic. We didn't see the strength of Geno Atkins (who has that anyway), but Still held his ground in many cases.

With 10:18 remaining in the first quarter, Still lines up over the right guard on second and ten from the Bengals 38-yard line. 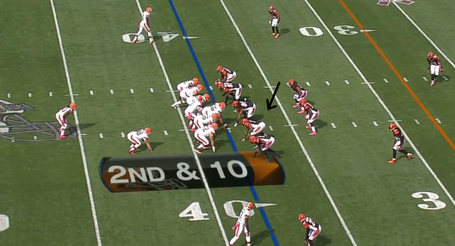 Richardson takes the handoff on an off-tackle behind Joe Thomas. Penetration by Michael Johnson, along with Vontaze Burfict collapsing the interior, forces Richardson to bounce inside. Devon Still, maintaining his blocker and holding his ground, is guarding the back-side. 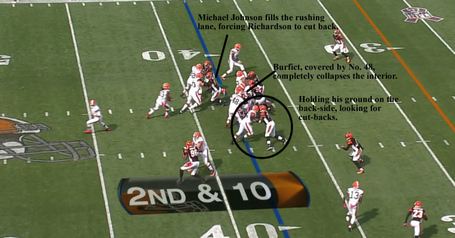 Once Richardson targets his rushing lane, Still, maintaining eye-contact in the backfield, disengages with his blocker, grips the running back, holding him up long enough for Reggie Nelson to secure the tackle. 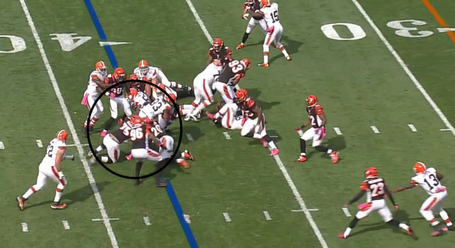 Later during the same game, the Browns have first and five from their own 25-yard line with 5:11 remaining in the third. This time Still is over the left guard. 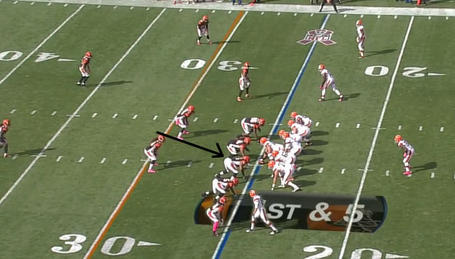 Much like the previous play, Still's aim wasn't penetration so much as prevention. With Trent Richardson aiming towards the right edge of the line of scrimmage, Still held his ground and gained position for a probable cut-back. Simplifying things was Leon Hall, lined up over the slot, blitzing off the edge where no offensive lineman accounted for him. 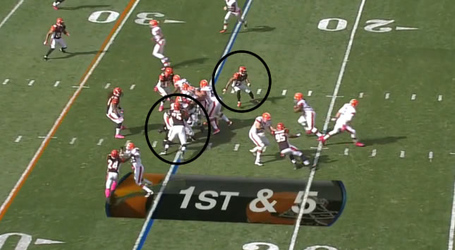 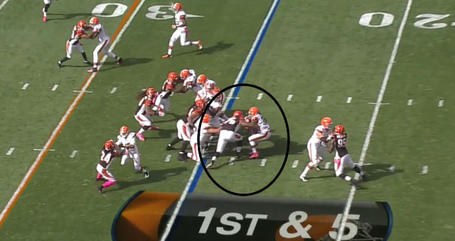 The following week against the Pittsburgh Steelers on Sunday Night Football, Still continued showing those traits. He'll hold his ground using brute strength, tracking the running back and disengaging once the rushing lane has been identified. With 1:50 remaining in the third quarter during a 17-17 tie, the Steelers have first and ten from the Bengals 49-yard line.

Still lines up in a one-technique between the right guard and center, playing Domata Peko's position while Geno Atkins' remains in his three-technique to his right. 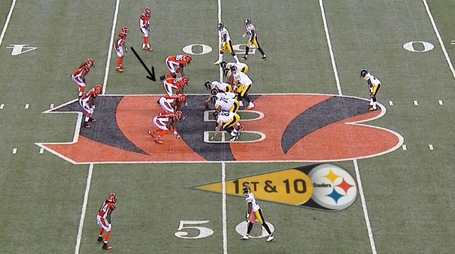 While Atkins is obliterated from a double-team (though he's clogging the lane, which is the most important last-ditch effort for a defensive tackle after being beaten), Still extends his arms and monitors. Michael Johnson plays it similarly while Vontaze Burfict watches, probably assigned the lane outside Johnson. 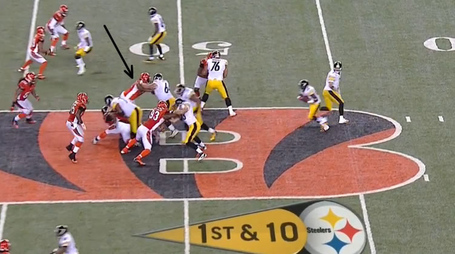 Chris Rainey has no intentions of cutting, targeting the limited room directly at Still. The defensive tackle identifies quickly enough that Rainey will work inside Still, who sheds the block, drops Rainey after a limited two-yard gain.

Still also contributed with a quarterback sack and forced fumble, but was later a game-day inactive when Sims returned off of the PUP List. We're not seeing the game-changing type of players that some on the defensive line are known for producing. We're hoping to see more power inside, perhaps forcing a redirection or an actual loss of yards.

We'll see more out of Still and Thompson this year and based on what we've seen out of Still, there's a good ceiling there for this kid to really grow.