Top Plays of 2012: The Reggie Nelson Interception Against Pittsburgh

We're taking a look at the top plays in 2012, in no particular order or ranking, as we put the finishing touches during an offseason prior to training camp next month.

Share All sharing options for: Top Plays of 2012: The Reggie Nelson Interception Against Pittsburgh

You knew the stakes.

If the Cincinnati Bengals finally beat the Pittsburgh Steelers, Cincinnati returns to the postseason. Simple as that. If the Steelers beat the Bengals, then conclude the season with a win over the Cleveland Browns, Pittsburgh earns a playoff berth and the Bengals stay at home.

Game of the year, defined by both teams, could be an understated classification on what this game meant.

Game tied at 10 with just one-minute remaining in the fourth quarter. The Bengals have third-and-one from the Steelers 48-yard line. BenJarvus Green-Ellis, at this point in the season, leads the NFL with the most third-and-one conversions, succeeding 14 times on 15 tries. Makes sense. Yet the Steelers anticipated. Eight Pittsburgh defenders crowd the line of scrimmage and Cincinnati offers Andy Dalton in shotgun with Brian Leonard flanking his left. We're not going to rely on Green-Ellis, who is far more reliable in those situations than most players in the NFL.

Instead Andy Dalton takes the shotgun snap and feels the pressure of six defenders crowding the pocket. Dalton cocks his arm back and unloads down the left sidelines to A.J. Green, who achieved an advantage over cornerback Cortez Allen. The pass angled out of bounds and Green, cocking his head upwards and anticipating an over-the-shoulder catch, was unable to readjust. Dalton reacts to the miss, using his fingers to grip the earholes in his helmet, displaying frustration from the missed opportunity. Float the pass deeper downfield and Green easily beats his man, which based on the receiver's reaction to the floating pass, was what he was expecting.

Kevin Huber punts the football back to Antonio Brown, who is forced to lift his hand signaling a fair-catch with Andrew Hawkins approaching from the gunner.

Ben Roethlisberger and the Steelers offense have :44 remaining in the game, with two timeouts, to reach Shaun Suisham's field goal range to break the 10-point tie and win the game. A short pass to Isaac Redman, along with Vontaze Burfict taking his time to lift himself off the running back which earns him a delay of game, moves Pittsburgh to their own 29-yard line. [NOTE: Burfict came off the field with an apparent injury to his wrist]. A batted ball that was nearly picked off by Carlos Dunlap led to a second and five with :24 remaining in the game.

Pittsburgh shows three-wide and the Bengals counter with a traditional nickel. 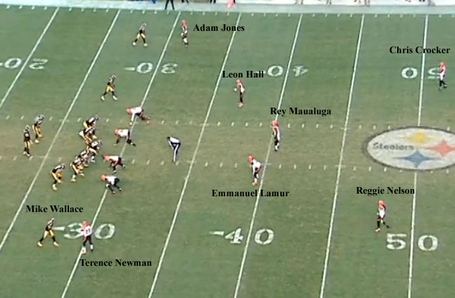 Newman allows Wallace to release, playing zone coverage around the 40-yard marker. Jones, on the other side, locks into the receivers hip, who is sprinting down the left sidelines. Crocker and Nelson backpedal, playing an apparent cover-two zone, while Rey Maualuga sprints down the middle of the field.

After Wallace runs a quick slant, he chugs up-field. In the meantime, Wallace Gilberry, playing right defensive tackle, fought through the block and forced enough penetration to force Ben Roethlisberger to rollout of the pocket. Wallace turns back, notices that his quarterback is in trouble, and improvises his route towards the sidelines. 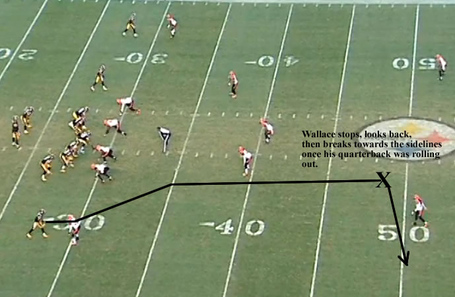 When Wallace breaks out towards the sidelines, Nelson digs his cleats into the turf and transforms into an Olympic sprinter.

Roethlisberger likely expected Wallace to angle more upfield, instead of the flat sideline route, which led to the quarterback overthrowing the receiver. Based on his timing and instinct, Nelson caught the football in stride and, though appearing somewhat shocked, returned the football ten yards to the Steelers 46-yard line.

One beautifully thrown pass later by Andy Dalton, the Bengals win 13-10 on a Josh Brown 43-yard field goal, returning to the postseason in 2012.