Top Plays of 2012: The Cedric Peerman Fake Punt Against Jacksonville

We continue reviewing the top plays of 2012, taking a look back at a special teams play during a week four win over the Jacksonville Jaguars.

Share All sharing options for: Top Plays of 2012: The Cedric Peerman Fake Punt Against Jacksonville

There wasn't much importance to Cincinnati's 27-10 win over the Jacksonville Jaguars. Not really. It was early during the season, when games are viewed as being less significant (though that's hypocritical by its very nature with a sport that only plays 16 games) and the Jaguars posed a relatively nonexistent threat to Cincinnati at the time. In fact, the 14 points that Cincinnati scored in the second quarter was more than enough to overwhelm Jacksonville's total output through all four quarters combined.

Cincinnati's first possession lasted all of two plays, the second being an interception by Andy Dalton, who slightly overthrew a side-arm attempt to Chris Pressley. The football deflected off Pressley's fingertips, caught by linebacker Kyle Bosworth. As fate would have it, Bosworth dropped the football during his nine-yard return and the fumble was recovered by a high-motor Andre Smith.

Cincinnati recovered, stringing together a 74-yard drive over 14 plays, capped by Mike Nugent's 35-yard field goal. Jacksonville responded with their own 77-yard drive on 13 plays, taking a 7-3 lead on a Blaine Gabbert touchdown pass.

In the meantime, Cincinnati's offense went three-and-out early in the second quarter, followed by another. The lone exception is on the latter is that when the Bengals had fourth-and-one with 8:36 remaining in the first half, it wasn't Kevin Huber that kicked the football.

In fact, it wasn't really even a kick (unless you apply "kick to the stomach").

Every thing appeared to be ho-hum when the Bengals punt team lined up. 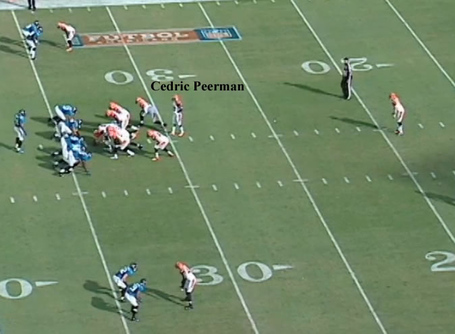 Considering that the Bengals were inside their own 35-yard line, the Jaguars logically disregarded the possibility of a fake punt. Down by four points, Cincinnati hasn't always been known as a high-risk team, despite a wide receiver's touchdown throw one week prior. They apply the odds like a baseball manager would when calculating the opposing lineup to determine the appropriate relief pitcher. Odds weigh heaviest.

Five down-linemen, four players covering the gunner, a de factor linebacker and a return man accounted for Jacksonville's coverage team. Cincinnati had seven blockers on the line of scrimmage, more than enough to account for Jacksonville's formation, considering that Cincinnati only needed one yard to convert the fourth down.

Notice how Marcus Trufant is the lone defender on the left. Of course you do, we circled it. He was all that stood from Cincinnati turning the football over on downs and the Bengals sustaining their possession.

Cincinnati was playing a team hard on their luck, struggling for a significant period of time that hasn't submitted a winning season since 2007. A fake punt inside the 35-yard line is the type existential motivator that intervenes on behalf of the underdog and challenges the overwhelming favorite. It was the second quarter and entirely unnecessary for the Bengals.

Peerman takes the direct snap and Vontaze Burfict successfully stalls Trufant; it never occurred to him that Cincinnati called a fake punt. In fact, it appeared that Trufant was entirely unprepared for an aggressive drive block, as opposed to the back-step typically applied during punts. In the meantime, Manny Lawson, Clark Harris and Dan Skuta walled off any pursuit from inside the box. 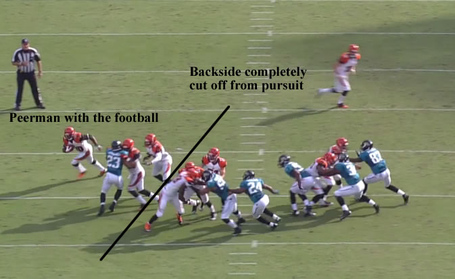 Once that was established, Peerman took off with an escort.

Notice how the cover men continue monitoring Andrew Hawkins in the screen-grab above? They are absolutely obsessed with Andrew Hawkins, who just went out of bounds and stayed there, allowing more room for Peerman to dominate.

Obviously this play, while big for this game, wouldn't be ranked on any top-ten most-important plays of the year. Perhaps this is just one of my personal favorites. But it was awesome. And impressive.