Bengals Are Right To "Wait And See" On Michael Johnson

The availability to sign Johnson to a long-term deal is quickly closing. And the Bengals are right to wait and see until after the season to make a decision.

Share All sharing options for: Bengals Are Right To "Wait And See" On Michael Johnson

Five days remain before the Cincinnati Bengals are unable to negotiate and sign Michael Johnson to a long-term deal. At least until after the season. And negotiations are quiet. For his part, Johnson is putting on the appropriate public front, claiming indifference and even acceptance that it's just part of the business. We expect such perspectives from someone like Johnson, whose been an ideal player without any distractions.

Currently playing on a one-year deal worth $11.175 million, Johnson will earn the ninth-highest base salary in the NFL this year and third-highest as a defensive end. Partly due to a flat salary increase resulting in the free agency landscape, it's evident that non-quarterbacks are receiving far less than they had expected. Especially those that were franchised in 2012. ESPN NFL Insider John Clayton reflected on this recently.

"From the players' standpoint," Clayton wrote in his most recent mailbag, "the one-year franchise tag can be a roadblock to growing annual income. Cornerback Brent Grimes had a $10.281 million salary last year as the Atlanta Falcons' franchise player. He blew out an Achilles tendon and ended up getting a one-year, $5.5 million contract with the Miami Dolphins this offseason. Washington Redskins tight end Fred Davis suffered the same fate, blowing out his Achilles. His franchise salary last year for the Redskins was $5.446 million. He stayed with the Redskins this year on a one-year, $2.5 million deal."

And injuries weren't the only cause for shrinking salaries.

"Last year, nine of 21 franchise players settled for their one-year tender, and most watched their salaries shrink," wrote Clayton. "Perhaps the most publicized was Wes Welker. The New England Patriots franchised him at $9.515 million for 2012. The Pats only offered him $5 million a year this offseason, so he moved to the Denver Broncos on a two-year, $12 million deal.

"Cliff Avril felt he was sitting at a comfortable number with the Detroit Lions last year. He had a $10.605 million franchise-tag salary. The best he could do this year was a two-year, $13 million contract with the Seattle Seahawks. That's a $4.1 million reduction in annual salary." 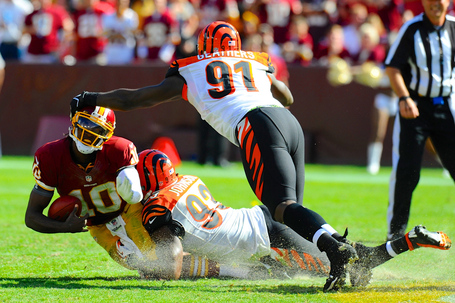 Based on reports that the gap between Johnson and the Bengals is fairly significant, Cincinnati is right to keep quiet in negotiations.

Johnson is a good player. Clearly his career is on the rise and you're witnessing noticeable increases in sacks totals. His overall game is improving as well, from pass coverage to run defense. Johnson features freak athleticism, size and a determination to improve every year (added weight in 2012, working on flexibility this year). We're not sure what his ceiling is right now.

But there's more to Cincinnati's "see before believing" philosophy, uncertain that Johnson will sustain the significant jump he showed from 2011 to 2012. With a fair amount of distance before the salary cap becomes an issue, Cincinnati was comfortable enough using the franchise tag on Johnson, allowing both sides to hammer out their perspective market value. Both sides have different figures in mind. Welcome to negotiations. 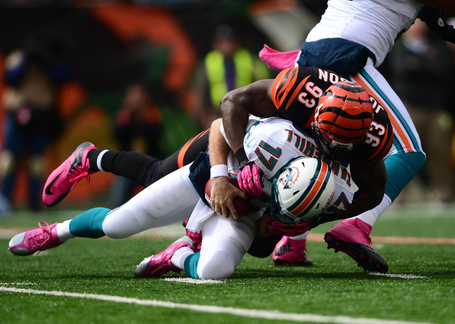 Yet, he has no leverage.

Despite doubling his sack production in 2012 with 11.5, Johnson is arguably the third-best pass rusher on the roster. Of course, that's an argument being waged from differing perspectives. One may cite Johnson's 2012 sack totals, durability, and the up-arrow beside his name. Others may argue Carlos Dunlap, who averages more pressures and hits per snap while being only three quarterback sacks shy of tying Johnson's career total, despite playing one less season.

Lacking confidence to commit on blind faith, negotiations are thus tempered and may even force Johnson's exit. Just as well because that would allow Cincinnati to further commit and invest in Geno Atkins and A.J. Green, both of whom may set the market at their respective positions.

And along with Atkins, the Bengals could have Dunlap (with a cheaper investment) and Wallace Gilberry, both of whom generated six sacks or more in limited playing time last year. Margus Hunt, the team's second-round pick will develop this year, anticipating significant defensive contributions in 2014. James Harrison, not a long-term solution by any means, is healthy and faces the prospect of playing freer with opposing offenses focusing on Cincinnati's defensive line. 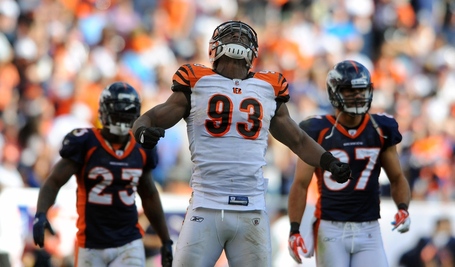 Many are demanding that the Bengals re-sign Johnson, but we're not sure if that's an internal desire born from frustration when the team let Johnathan Joseph leave for Houston. Or as far back as 2007 when Justin Smith signed with the San Francisco 49ers. On the other hand, Johnson is a good player that provides stability and foundation. Strong, durable, and progressively productive.

But the questions that currently exist are not ours to answer. The Bengals are smart to wait and see how this story unfolds in 2013. They can't risk signing Johnson today to a big-ticket contract with negotiations looming with better players later. Prove that 2012 wasn't a fluke and Cincinnati will inch closer to what Johnson's representatives may feel is a fair deal. And then negotiations will really begin.