Despite the criticism that he has faced, Jermaine Gresham has done great things in Cincinnati.

Share All sharing options for: The Second Era for Jermaine Gresham Begins

There are two things that we know about Jermaine Gresham.

One. Not only is the two-time Pro Bowler reliably improving every season, he's accomplishing things that no tight end in franchise history has.

And Gresham did that without Kenny Anderson or Boomer Esiason -- two bona fide legends in Cincinnati. Instead he played underneath the shadow of a diva-driven offense in 2010. Then, within a year, the Bengals started a new quarterback, hired a new offensive coordinator who implemented a new system, all against the obstacle of an NFL lockout. 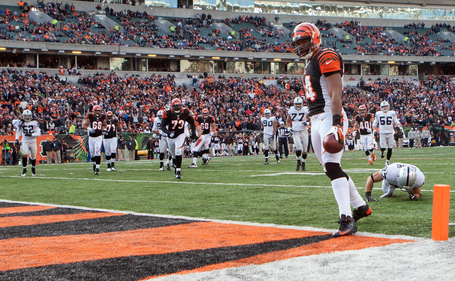 That's not to say that Gresham isn't still experiencing growing pains. Following the 2011 season, Bengals offensive coordinator Jay Gruden explained Gresham's difficulties adapting to his offensive scheme. And even with some other aspects in the NFL.

"He's just got to continue studying, learn and rep, rep, rep, rep and rep," Gruden said. "He's just got to mentally get into it and see the looks. He's very raw. He's never done this type of thing before where option routes, reading the safeties, two deep, three deep or whatever it might be. The more he sees the better he's going to be and once he gets it, he will be a dominate force."

That didn't temper expectations though. Eight months later, Gruden compared Gresham to the Patriots Rob Gronkowski, viewed at the time as one of the league's top tight ends.

Since statistics harbor over-inflated perspectives that's only valued from a certain talking point, we'll go ahead and get to the second known fact about Gresham.

He pisses everyone off.

It's not that Gresham's virtually established the best three-year run for a tight end to start a career in franchise history -- or at the very least comparable to the heroes of former squads that are revered today. Those are meaningless numbers. Even some supporters have labeled his Pro Bowls as fraudulent because it was the result of players voted into the All-Star game that either sat out with an injury or prepared for the Super Bowl.

It's the dropped passes.

Gresham caught 64 of the 92 passes (72 were labeled as catchable) when he was targeted, dropping only seven in 2012 (which ranked No. 21 in the NFL). Gresham's drop percentage of 7.45 percent ranks 117th worst, with 116 NFL players having had higher drop percentages, including New Orleans' Jimmy Graham (10.37 percent). And the year before that, Gresham dropped five (ranked 52nd in the NFL).

So let's put that in perspective. In the past two years, Gresham has been targeted 186 times, caught 120 of those passes and dropped 12.

Maybe his drops are extensively highlighted due to the situation, or what some may label as "crucial". 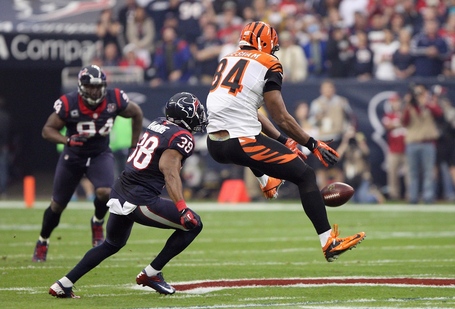 After going through every targeted pass that fell incomplete on NFL Game Rewind (a great investment), we concluded that of his seven drops, none were in the fourth quarter, only three were in the second half, and three ended drives on third downs. One (against the Ravens in week one) should have led to a touchdown. But Ed Reed's foot steps mentally banged Gresham's concentration. On the other hand, he had several passes that were jarred lose on hits down field, especially against the Houston Texans during Cincinnati's Wild Card loss. That was a bad game for Gresham and unfortunately for him, the most crucial of crucial games.

And we're not talking about difficult catches. Five footballs either slithered through his hands or repelled like a tennis ball brutally escaping from a racket. Another slapped against his chest, forcing Gresham's arms to flail in a panic as the football separated from the body.

Compounding Gresham's difficult reality is that the amount of receptions, yards, and maybe even touchdowns, will decline. Not because of his abilities -- let's not forget his fourth down 20-yard conversion, or the handful of 50-plus yard receptions. Cincinnati is gearing up for a philosophical shift, redeveloping a passing offense that could jeopardize Gresham's 186 targets over the past two years. 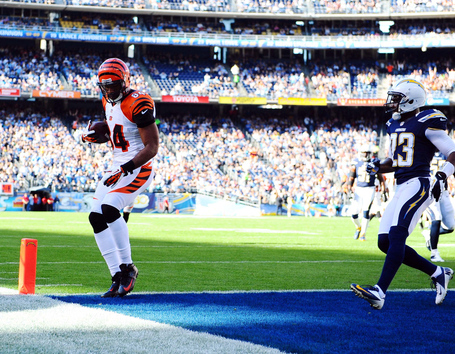 Instead of being Cincinnati's "second best receiver", Gresham will be joined by first-round rookie Tyler Eifert, second-round running back Giovani Bernard, with second-year players Mohamed Sanu and Marvin Jones likely making the type of progress that receivers make after their rookie seasons. Bernard will also join BenJarvus Green-Ellis to give Cincinnati their best one-two punch in years. A more balanced offense with weapons hurts Gresham's overall targets.

We're not putting Gresham on this grandiose pedestal. Nor are we condemning his low percentage of drops -- otherwise A.J. Green should receive equal treatment in that regard. However, perceptions shouldn't dictate these Hall of Fame expectations just because he's a former first-round pick. They should be tempered perceptually by what he's done. And he's done far more than what he's being given credit for.