Looking at possible salary cap casualties for the Cincinnati Bengals

Every year we break down possible salary cap casualties. We've only identified two this year and even they appear unlikely.

Share All sharing options for: Looking at possible salary cap casualties for the Cincinnati Bengals

According to the NFL Player's Association, the Cincinnati Bengals have nearly $22 million of cap space available. That number currently ranks as the fourth-most in the NFL behind the Cleveland Browns ($33.7 million), Jacksonville Jaguars ($22.9 million), and the Philadelphia Eagles ($22.5 million).

Yet, cutting players right now to make space isn't necessary in the context of saving money for other players -- notably extensions.

For example, the Bengals didn't cut Jamaal Anderson this week to save $2.3 million -- an offseason bonus of $200,000 counts as dead money. Earlier this year the Bengals released Jason Allen, costing the team $500,000 in dead money, but removing $3 million off the books.

We doubt that these moves have much to do in relation to contract extensions for Michael Johnson, Geno Atkins, and Carlos Dunlap (aka, "the big three"). Anderson and Allen had two-year deals that expired after the 2013 season. If contract extensions are signed by the aforementioned "big three", their deals wouldn't significantly impact the salary cap during the first-year and Cincinnati has maintained enough space against the cap to have room for everyone. The harsh (and extremely simple) reality for both players is that they weren't needed, projected to miss the cut due to the rise of others and personnel improvements at their respective positions.

That being said, every year we take a look at the roster and figure possible salary cap casualties. This is really a nice way of saying veteran players that we're expecting to get the ax. Usually motivated by salary issues, cap casualties always takes into account that player's projected production, age, and the overall strength at his position.

While going through the current roster, we only identified two candidates. 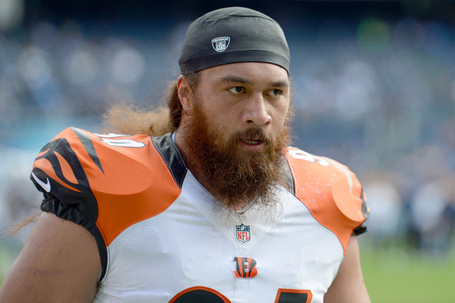 Currently with the sixth-highest cap number on the team at $5.1 million, Peko is signed through 2014 but with a decreasing cap number ($3.9 million) during the final year of his current deal.

For his part, Peko is one of those players that plays an unheralded position that's not defined by statistics, rather the impact he has for other players and the overall failures of his opponents. More importantly, he's a leader in the locker room that stood tall and organized offseason training for players during the NFL lockout in 2011.

WHY IT COULD HAPPEN

There is a system on the defensive line in which players are developing at their own pace to eventually be plugged into more productive roles. The Bengals have two young defensive tackles in Devon Still and Brandon Thompson, selected in the second and third round of the 2012 NFL draft.

Additionally, even dealing with $1 million in dead money, the Bengals would benefit with modest savings against the cap.

Peko's leadership, character, and work ethic is unrivaled, if not inspiring to the team's newest generation of talent. We're not having this discussion if it were about anything other than money.

Plus, the likelihood of Still or Thompson replicating and replacing Peko is suspect based on the limited sample size that we've seen out of the second-year defensive tackles.

ON THE OTHER HAND

According to reports in February, Peko's representatives approached the team about an extension. Those same reports detailed that the Bengals aren't "ready" to negotiate because of the amount of work that they had with this year's free agents. One could view this report as a end-point for Peko's career, but we easily see the team extending Peko within the year to help lower Peko's cap number. 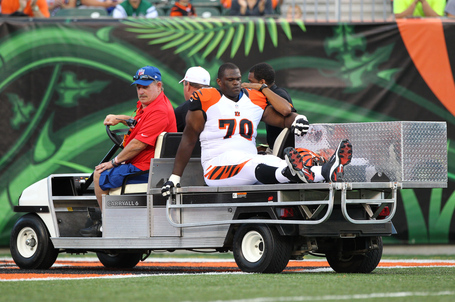 Wharton actually figures to battle Clint Boling to start at left guard during training camp this year. If Boling wins out, then we're not sure how likely the team will keep Wharton's $2.675 million salary on the books.

WHY IT COULD HAPPEN

Cincinnati has quietly developed depth at guard, though a lot of it is unproven. Tanner Hawkinson is believed to be a versatile offensive linemen while Mike Pollak has 41 starts to his resume with the Indianapolis Colts -- but he only only played one game in 2012 with the Carolina Panthers. During the final two seasons with the Colts (2010 and 2011), Pollak scored positive PFF grades during each season. Wharton's release would also free up over $5.2 million in base salary from the books combined over the next two seasons.

There's also an injury factor. Wharton tore his ACL during the preseason last year and even though he's expected to be ready for training camp, there's always concern when a player is rehabilitating an ACL injury. For every Carson Palmer and Adrian Peterson, there's ten times as many players that never fully recover (especially physiologically) from an injury like that.

An injury at offensive or poor production by Boling is made even more problematic if Cincinnati doesn't have someone proven and capable on the bench. That responsibility would come down to free agent Mike Pollak and rookie Tanner Hawkinson, who spent most of his offseason training at offensive tackle.

Plus, like Peko, Wharton carries a $1 million penalty in dead money if he's released this year. That number is cut in half next year, but it's not enough of a benefit that would have a significant impact on contract negotiations with the "big three".