Carlos Dunlap enters 2013 as a play-maker, but the question will be quarterback sacks

One could argue that Carlos Dunlap is poised for a breakout season. How can he when he's already a play-maker?

Share All sharing options for: Carlos Dunlap enters 2013 as a play-maker, but the question will be quarterback sacks

When Yahoo! Sports released their AFC breakthrough players, you can only imagine my pause that Brandon Ghee was labeled Cincinnati's breakthrough player. Don't get me wrong. There's an optimistic belief that if he can avoid the villainous injury that lurks in the shadows, Ghee should be a reliable contributor on a cornerback roster that's loaded with talent.

But the problem for Ghee, even if he stays healthy, is going to be playing time. Leon Hall and Terence Newman are expected to start. Adam Jones, a recent benefactor of a three-year deal worth $5.35 million, will play nickel. Dre Kirkpatrick is coming off an injury and, for the sake of discussion, is a red-shirt freshman. It's possible that Ghee and Kirkpatrick jockey for position but our perspective fails to identify Ghee's prospects in 2013 as a breakout threat. And all things being equal, the Bengals will probably favor Kirkpatrick, one of the team's first-round picks in 2012.

Fishing rod in hand, we lower the "breakout hook" into the pool of potential breakout players. In virtually every discussion, thought, and examination, we're routinely drawn to Carlos Dunlap. 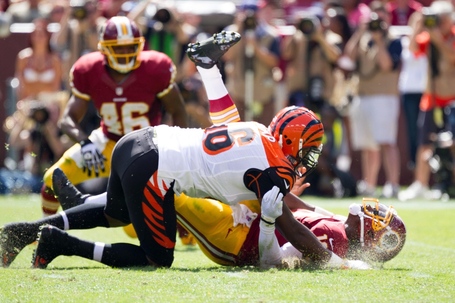 Dunlap should already be categorized as a play-maker, an immediate threat that impacts the outcome. With 30 percent of his quarterback sacks coming in the fourth quarter, one could even call him the closer.

Look at the resume last season.

Dunlap earned AFC Defensive Player of the Week in week 13 against the San Diego Chargers, recording two quarterback sacks that directly led to fumbles. Dunlap also generated a pass deflection, a season-high five tackles and an additional four quarterback pressures. Overall, he led the Bengals with four forced fumbles in 2012, scored a touchdown on an interception return, and posted five tackles-for-loss. If you combine his four forced fumbles and three recoveries, Dunlap has three more forced fumbles and recoveries combined than the player with the second-most on the team last season. And that's not even including the fumble return for touchdown that scored from 2011. 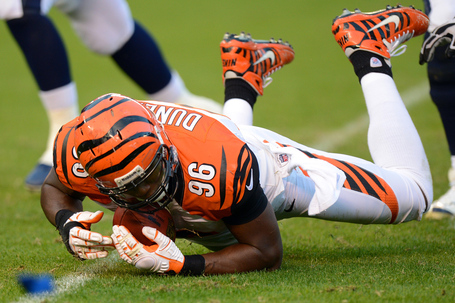 And that's the rub.

Generating an impact as a pass rusher leads to problematic results for opposing quarterbacks. It forces a throw before the receiver's route is ready. A good pass rush also encourages pocket abandonment, indiscriminate panic, and the reliance of leg-speed, which isn't a strength among most quarterbacks in the NFL.

Yet because there are those that find comfort in chaos, the failure to complete the play with a quarterback sack open opportunities against the defense. It may even lead to bigger gains because the extended play allows receivers time and improvisation to shed their defenders.

So where does one draw the line between pressure and a quarterback sack? Sure, 10.5 sacks in the past two seasons feels below par. Or is it above par? Whatever. Dunlap has still generated at least a shared sack in 17 of 38 career games (44.7 percent) -- just below the defensive line benchmark set by Geno Atkins (47.9 percent). Atkins, a two-time Pro Bowler and one-time First-Team All-Pro defensive tackle, routinely laps Dunlap's numbers, but that's more consistent with most players in the NFL. So the comparison is poor. 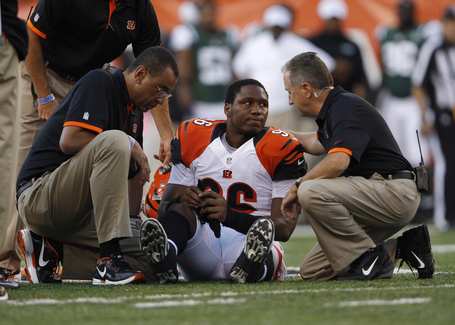 Dunlap missed four games 2011 with a hamstring that he injured against the Tennessee Titans. It was his second sack late in the fourth quarter that sealed Cincinnati's win. A preseason knee injury forced him to miss the first two games last season, bringing his games missed (due to injury) to eight in three seasons -- he missed an additional two games in 2010 because he was a game-day inactive, but not related to an injury.

Breakout player in 2013? Hardly. He's already a playmaker. A closer. He creates turnovers with a hawkish wingspan and a powerful rush. Eventually, the sack numbers will come. And when they do, we're not talking about a breakout player. We're talking about an all-star.