On Monday, the Bengals rewarded defensive end Carlos Dunlap with a five-year extension worth $40 million. Dunlap is a talented playmaker with a diverse skillset. In this article, I breakdown Dunlap's power move, his bull rush.

Week Three. For Carlos Dunlap, it's the first game of the year, having missed the first two games to a knee injury. And he returns with a bang.

Dunlap's dimensions are an astonishing 6-6, 280 pounds. With this rare combination of length and power, Dunlap has a wide array of pass rush moves as his disposal. 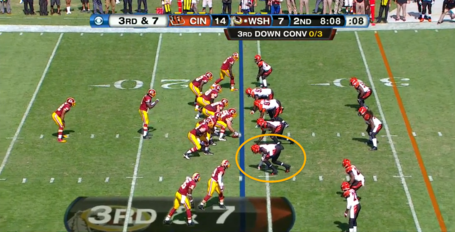 Dunlap bursts upfield with three powerful strides. He is focused on placing his hands where he can get the most leverage on right tackle Tyler Polumbus. You can see that Polumbus has given Dunlap a bit too much cushion initially, and Dunlap uses this extra time to raise his hands and set up his bull rush move. 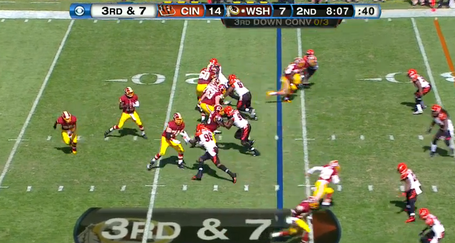 Now, Dunlap has his hands on Polumbus' shoulder pads. It's a leverage game from here, and Dunlap has the advantage with more momentum and power. 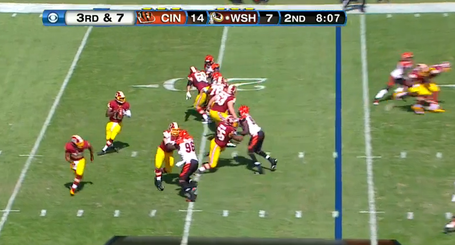 A few frames later, and we see that Polumbus knocked Dunlap's left hand away. Dunlap had placed his left hand too high, but his right arm is still driving Polumbus back into the quarterback. This is why this play is special. 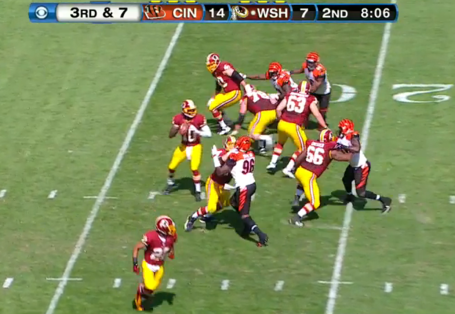 Dunlap can tell that RGIII is about to throw the ball. With one explosive surge of his right arm, Dunlap tosses Polumbus off balance, clearing the lane straight to the quarterback. Dunlap has switched his arms so that his left arm is now pushing Polmubus back, and his right arm is free. He swings his arm high to disrupt the quarterback's vision. 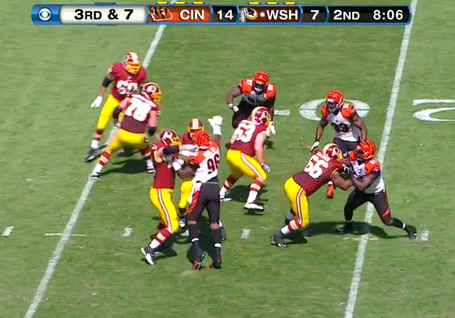 Griffin wants to check down to his running back in the flats, but Dunlap disrupts the throw by pushing hard on Griffin's shoulder. Griffin is still able to get the ball away, but it's an errant pass and bounces harmlessly a few yards short of the running back. 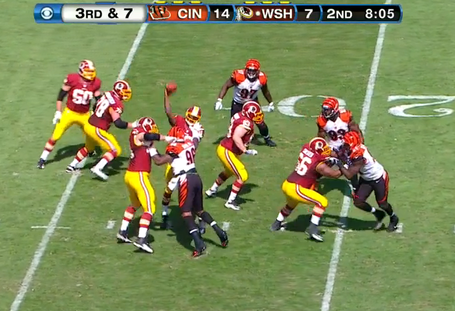 Dunlap further showed his deceptive power knocking Griffin down with only his right arm. Then, he tosses Polumbus to the ground with only his left arm.

Thanks to Dunlap, the Redskins have to punt, and RGIII and Polumbus are both wondering what the hell just happened.