Top-Ten Keys To A Successful 2013 Season: No. 5 Continuing To Rush The Passer Effectively

It's no secret that the defensive line was the heart of the Bengals defense last year. They finished third in the league with 51 sacks, led by Geno Atkins (12.5), Michael Johnson (11.5), Carlos Dunlap (6.0), and Wallace Gilberry (6.5).

Share All sharing options for: Top-Ten Keys To A Successful 2013 Season: No. 5 Continuing To Rush The Passer Effectively

Fearing that free agency would diminish the production that Cincinnati enjoyed from the defensive line last season, the Bengals quickly re-signed Wallace Gilberry and Robert Geathers, and applied the franchise tag on Michael Johnson. They further enhanced the roster by signing James Harrison, a victim of the Steelers trying to reduce their overall cap number. Furthermore, Cincinnati added defensive end Margus Hunt during the second round of the 2013 NFL draft.

However, there were some changes applied during the offseason, which may surprisingly enhance Cincinnati's pass rush. Pat Sims, a natural run stopping defensive tackle, departed for the Oakland Raiders. Unconcerned (and relatively unphased), the Bengals didn't put up a fight. On the contrary, they actually have the opportunity to focus on Devon Still and Brandon Thompson, both of whom are idling behind starters Geno Atkins and Domata Peko.

Though Still and Thompson remain relative unknowns compared to Pat Sims' successes against the run, one of the primary strengths for the Cincinnati Bengals is clearly the defensive line, especially when rushing the quarterback.

The Bengals ranked third in the NFL in 2012 with 51 quarterback sacks. Of those, 46 came from the defensive line, which is more what 24 other NFL teams registered as a defense. Geno Atkins, who registered 12.5 quarterback sacks in 2012, recorded the most sacks by an interior lineman since the Saints' La'Roi Glover (17) and Buccaneers' Warren Sapp (16.5) in 2000. Furthermore, Atkins, Dunlap, and Johnson were responsible for 60% of the defense's quarterback hits and 65% of the team's quarterback hurries last year.

But those are certainties, productive assets that we're expecting to take Cincinnati to that next level. The unknowns that do exist evolve from tendencies that were applied last season.

Nickel defense was the team's most frequently-used alignment against passing formations; a generic counter that's strategically applied in the NFL. Last year, they usually brought in Adam Jones to replace the strong-side backer. Dunlap, Atkins, and Johnson played their normal alignments. Geathers and Gilberry usually moved inside as a defensive tackle, if the position wasn't already manned by natural tackles like Sims or Peko.

This is one variation of the Bengals "nickel" defense, which was used more than 50% of Cincinnati's defensive snaps last year. 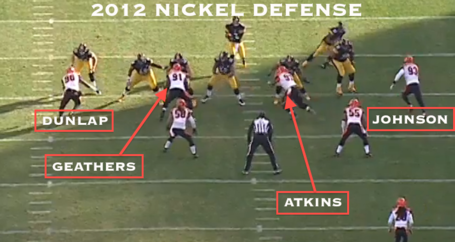 Ideally, Peko and Geathers' interior presence will be relegated to short yardage situations this year where a pass or run could apply. By default, and a little hope, that leaves obvious passing situations to Still and Gilberry, who finished last season with an impressive 6.5 quarterback sacks on only 184 rushes. Still has the potential to emerge this year as a talented playmaker, or so the Bengals hope.

Geathers and Peko, to put it mildly, aren't exactly known as pass rushers -- together they combined for only five sacks last year in 736 total pass rush snaps.

James Harrison is expected to be an inside rusher, but likely as a strong-side backer during a blitz.

"(Zimmer) is doing some things that will hopefully get me some one-on-ones with a lot of interior linemen," Harrison said during OTAs. "Let the guys who were here continue to do the outside rushing that they were doing."

Another player to keep an eye on during training camp is Dontay Moch. The former third rounder has been moved to defensive end this year. While it's going to be a tough uphill battle at that point, there's too much fluidity from now until Chicago to completely write him off. Moch actually led the team in sacks (3.5) during the preseason last year. However, chronic migraines and a four-game suspension kept him off the field.

As for Hunt, we wouldn't bet the house that second-round defensive end makes a big impact on defense this year. An extremely raw football player, the Bengals have the luxury of developing Hunt thanks to a defensive line rich with talent. With 17 career blocked kicks, we know he'll certainly make an impact on special teams.

Looking forward, we can continue to expect big things from Atkins, Dunlap, and Johnson. It's how the coaches choose to use Harrison as a pass rusher which will be a continuing storyline throughout "Hard Knocks" and the regular season. Overall, there's plenty of young rising stars, mixed with veterans and potential talent that should give rise to the argument that Cincinati's pass rush remains a strength against this year.