The Bengals held a Pep Rally to kickoff training camp at Paul Brown Stadium on Thursday evening. Cincy Jungle writer Andrew Miller was one of approximately 7,000 fans in attendance, and he's here to share his thoughts on the event.

When I jumped into my car to begin my Friday morning commute, I began dialing one of my friends. When he picked up, I barely gave him an opportunity to speak. I was rambling about what I witnessed the night before. My drive to work is about thirty minutes, and I spent a third of that time recapping my night with seemingly enthusiastic urgency that I don't often have at eight in the morning. I'm pretty sure my friend was slighty taken aback by the enthusiasm that I was displaying, but I didn't care. I had to talk about the Bengals Pep Rally. I wanted someone to know what I was a part of Thursday night. I wanted everyone to know what they missed out on and why they should never miss out this excellent fan experience.

The gates opened at 7 p.m. on Thursday. Fortunately parking was free in the public lots surrounding Paul Brown Stadium. I stopped at a local bar for dinner beforehand, and I was still able to get through the gates in time to see the start of the event.

As I walked through the gates, a highlight reel of the 2012 season began beaming through the evening sky as fans cheered during each memorable play. The stadium boomed with the same music that you'll often hear at a regular season game, and the crowd did their part in echoing cheers around a stadium that contained chairs and an empty stage on the field rather than players. Those chairs were reserved for season ticket holders. 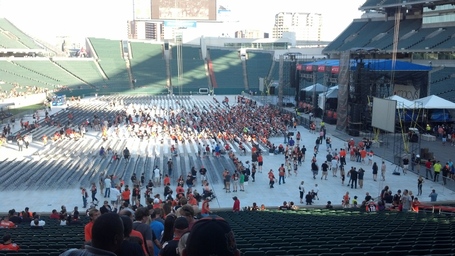 Fortunately, my father in law is a season ticket holder, and was able to print me out an e-mail which gave me access to the field that night. Since he wasn't attending, and I shared some of his tickets, I was able to sit approximately fifteen rows from the stage that would soon be taken by former Bengal and color analyst Dave Lapham. Bengals play-by-play analyst and broadcaster Dan Hoard as well as Bengals alum and radio host Artrell Hawkins also took the stage. After some introductions to the crowd, the three began to introduce former Bengals players. It was impressive how many former players were able to show up. Here is a list of players I actually saw on stage:

Not only were all of these players on stage to greet an enthusiastic crowd of Bengals fans, but a large group of them were available for autographs during a musical performance by local band The Rusty Griswolds. 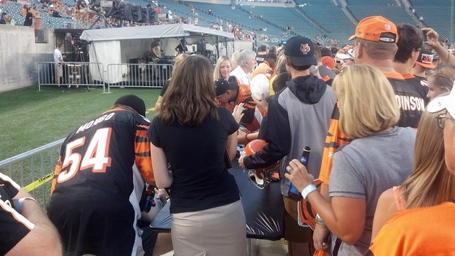 It was during a 45-minute concert to the fans that I was able to really absorb my surroundings. Fans were buying refreshments from vendors all over the stadium. Fans of every age were lined up to meet former Bengals greats for autographs and a handshake. The Pro Shop was constantly bursting with foot traffic as fans bought hats, jerseys, and any other impulsive purchase to prepare for the 2013 season. There were families everywhere. I can't recall ever seeing so many parents with their children at a Bengals event. With the Cincinnati Reds on the other side of the country in Los Angeles, the Bengals Pep Rally was creating the pulse for sports fans of all ages in the Queen City on Thursday night. 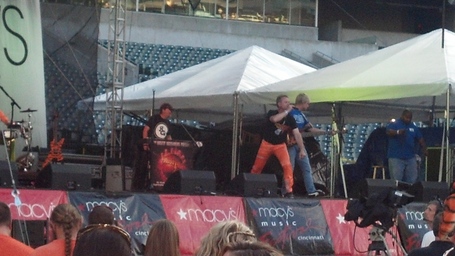 When the band stopped playing, and the fans settled into their seats, the stadium lights were radiating the atmosphere of a Sunday in autumn as the Ohio River began to cool the summer's evening air.

Marvin Lewis took the stage. 7,000 fans proved their numbers by cheering the coach that we hope will lead Cincinnati to a third consecutive postseason berth... and beyond. Marvin thanks the fans. He's quick to say a few words, and he shifts focus to the players who come on stage one by one.

Nearly every single player takes the stage as Hoard, Lapham, and Hawkins introduce each of them. Andy Dalton gets the first swell of cheers, followed by A.J. Green. Fans make it known that Adam Jones is an obvious favorite with a roaring ovation. Players are introduced at a rapid pace as fans relentlessly cheer their 2013 team. Andrew Whitworth may have been the source of hoarse voices the following morning as fans give the giant offensive tackle a giant ovation. But it's Domata Peko, the man that orchestrates the crowd every Sunday in Paul Brown Stadium, that made 7,000 fans sound like 70,000.

When the procession of players ends, Andy Dalton, BenJarvus Green-Ellis, Michael Johnson, Carlos Dunlap, and Cincinnati native Kevin Huber each took a minute to thank the crowd and encourage fans that this team is worth celebrating.

The lights dimmed, and the big screen fires up again. Welcome To the Jungle begins to echo through the stadium to the delight of fans. The video broadcasted highlights of A.J. Green's insane touchdown against Kansas City, accompanied by several of Geno Atkin's quarterback sacks. One of BenJarvus Green-Ellis' big runs glimmered into the dimmed stadium to the tune of Guns & Roses. Many other great highlights were shown, and the video concluded with a darkened figure pushing a mountain of poker chips to the middle of a card table.

The crowd roars, but applause is soon overwhelmed by the booming of fireworks in the night sky. It was then that I realized the Bengals players and their head coach quietly left the stage when no one was looking. While the crowd was witnessing the past on the big screen, the present team slipped away toward a future of one-on-one drills, Oklahoma drills, two-minute drills and everything else that training camp requires; all while NFL films rolls the cameras, providing a window to fans around the world with Hard Knocks. 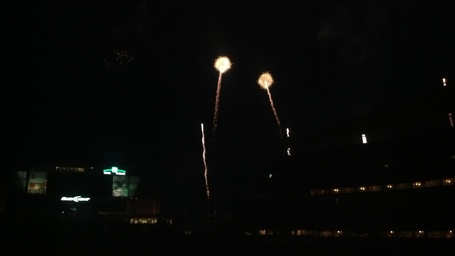 I was trying to beat traffic, but the fireworks were still lighting up the city as I walked to my car. The Bengals Pep Rally was engaging, well-planned, very accessible, with free admission for fans. Unless you wanted to purchase Pro Shop items or refreshments, you can walk into Paul Brown stadium for the Pep Rally without paying a cent. I don't know how the event turned out from a business standpoint, but I see no other reason for the Bengals to stop running this event every year for the public. In a few years, 7,000 fans will likely double in numbers or maybe triple. And why not? It's an event that shouldn't be missed by any Bengals fan.

Next year, bring a friend. Bring your family. Bring anyone that wants a free evening out to celebrate the game of football. Because within the gates of Paul Brown Stadium on that warm July night, it was September. It was football season. And the Bengals seemed genuinely happy you could share it with them.