Kaepernick and his Dolphins hat asks, "why you mad, bro"

San Francisco 49ers quarterback Colin Kaepernick wore a Dolphins hat to a July 4th party. On the scale of "not giving a damn", where does this rate?

Share All sharing options for: Kaepernick and his Dolphins hat asks, "why you mad, bro"

#Dolphins are at point that other teams' franchise QBs try to pass as members. Nice hat Kaepernick! @NinersNation pic.twitter.com/aTNIxyoMKU

Hey @NinersNation - Just wanted to give you another look at Kaepernick sporting that epic hat! #Dolphins pic.twitter.com/uxpKVKbkD4

Kaepernick added a picture of himself with the Dolphins hat, being defiant against the criticism. 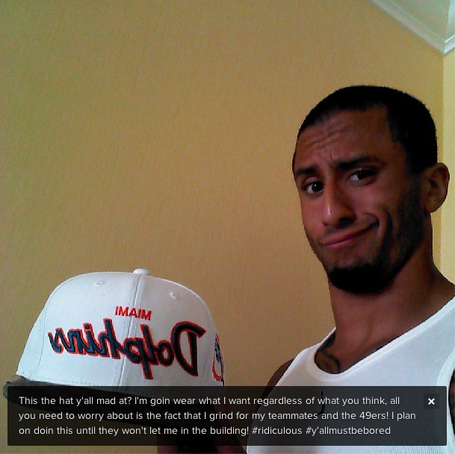 Do you care? Not that Kaepernick is sporting another team's logo and colors -- which is really a dumb thing to do, but whatever. Do you care that an NFL player is sporting the colors of another NFL team? Or does that moment of caring only exist if a Bengals players were to do it?