The final eight episodes of Breaking Bad begin on Sunday at 9/8c on AMC. Let's compare characters of the show with Bengals players (and staff) so we have an excuse to discuss Breaking Bad on Cincy Jungle.

In February, I put together an article that compared Bengals players to the characters of The Walking Dead. It's been awhile since another television premiere has really demanded my attention, but the second half of the final season of Breaking Bad is all I can think about at the moment. It's about time that I mash together two of my favorite things: Football and great scripted television.

Mike is an ex-cop and private investigator that has won't hesitate to do what needs to be done when handling a task given by any man that hires him. Mike is a "fixer" that usually results in him fulfilling an assassin role.

Like Ehrmantraut, James Harrison is a grizzled veteran that won't apologize for his demeanor or decisions. The first episode of Hard Knocks portrayed James Harrison as a man apart. It's clear that some of his teammates and even coaches are a bit uncomfortable with him at times.

There are plenty of scenes in Breaking Bad where Mike makes a character uncomfortable simply because it's unclear what he'll do next. He isn't a loose cannon. Mike is simply a man that does what he has to do to keep his boss safe without adding drama into the mix.

Harrison is direct and straight forward in his personality and is just out to do his job. Mike's gruff exterior comes along with the fact that he deeply cares for his family. We can only hope for the same from Harrison as a teammate. 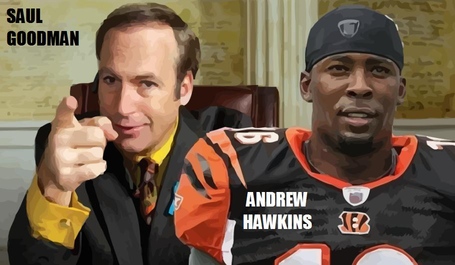 Saul Goodman is the sleazy lawyer that works hard at finding loopholes in the legal system as he tries to assist Walter and Jesse in their day-to-day drug operation. We'll set aside the issues with Saul's moral compass (as we probably should with most Breaking Bad characters), and point out that Saul is actually a very talented lawyer despite his shady appearance. Looks can be deceiving when it comes to Andrew Hawkins as well.

Saul is also a fixer. He tends to bail Walt and Jesse out of multiple dilemmas throughout Breaking Bad. Hawkins has successfully bailed the Bengals offense several times with his playmaking abilities. During a game against the Browns in 2012, Hawkins managed a 50-yard touchdown after Dalton was scrambling for an option. The game broke open after that play, and the Bengals went on to win the game 34-27.

Saul does whatever it takes to satisfy his own interests. He'll invest in businesses, take on morally corrupt clients, and bend the law as much as possible as long as he gets his cash up front. Hawkins is taking on any role given to him just to satisfy his desire to be an NFL player. Whether it's special teams, lining up in the backfield or as a wide receiver, Hawkins is versatile because he makes an opportunity work in his favor.

Both Hank and Gruden are a bit boisterous and can sometimes be cynical or rude in their demeanor, but both have good intentions and care about those around them. Truthfully, Jay's brother Jon Gruden may be a closer match to Hank, but both brothers aren't too far apart in their characterization.

Hank can be a bit more overbearing than Jay is, but both like to tease and prod those around them with a cavalier attitude. Hard Knocks showed off Gruden's tendency to pester his players with lighthearted jokes. He constantly harassed Andy Dalton over his rubber wedding ring in the company of other players.

Hank is always good for a gibe at the expense of coworkers and family, but ultimately he'll speak up when it comes to defending those he cares about. Gruden was recently highlighted in Hard Knocks as he asked a menacing James Harrison to keep his hands off of A.J. Green a.k.a. "The Merchandise." Both men have a lively demeanor, but ultimately take their jobs seriously while being mindful of those around them. 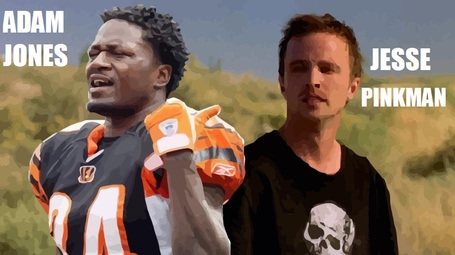 A troubled past, an impulsive personality, and a penchant for making costly decisions; Jesse Pinkman and Adam Jones are very similar to one another. Jesse may appear clueless at times, but he's quick to learn. It wasn't until Jesse's former school teacher, Walter White, began to mentor Jesse that his true potential began to surface.

Like Jesse, Adam Jones was full of promise when he was drafted by the Tennessee Titans in 2005. A string of off-field issues led to a roller coaster career in the NFL until the Cincinnati Bengals decided to give Jones a chance in 2010.

Mike Zimmer, much like Walter, took Jones under his wing and was able to extract Jones' talent through discipline and hard work. Jones still has his occasional hiccups off the field - his recent altercation at a bar is an example - however, like Jesse, Jones has become a productive teammate over the past few years. 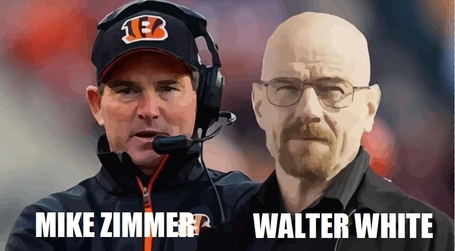 Zimmer's ability to take the ingredients of the Cincinnati Bengals and form an impressive product is something that he's been praised for since making the Bengals a top ten defense in 2009.

Okay, so there's a strong distinction between Walter's skill in cooking meth and Zimmer's skill with an NFL defense, but both are characterized as technicians of their craft. In Breaking Bad, Walter pushes Jesse with his own brand of "tough love," and Bengals players have referenced the same relationship with Zimmer over the years. The comparison between the two isn't about the moral ambiguity that Walter has shown over the course of the Breaking Bad series; it's about two men that know what they want and won't compromise in their attempts to leave a legacy.

What other shows would you like to see compared to Bengals players in the future? Sound off in the comments section below!