Conner, who replaced Chris Pressley, had an excellent performance against the Atlanta Falcons on Thursday.

Share All sharing options for: John Conner making an argument for a spot on the 53-man roster

When Chris Pressley went down against the Philadelphia Eagles with a season-ending injury, the Bengals signed John Conner to a two-year deal -- this year being the second and final season. Now, the most common theory is that Orson Charles is the leading candidate for the position battle, mostly because of his versatility in the passing game.

Yet, based on his performance against the Falcons, Conner is doing everything in his power to terminate that discussion. A little too cliche? Yea, we're nerds. However, don't be surprised if he makes the team; especially for an offense looking to secure a powerful rushing offense.

Let's take a look at a few of those plays.

Bengals have second and one from the Falcons 27-yard line with 8:47 remaining in the second. Conner is off-set I to the left with Richard Quinn on the offensive line to the right. 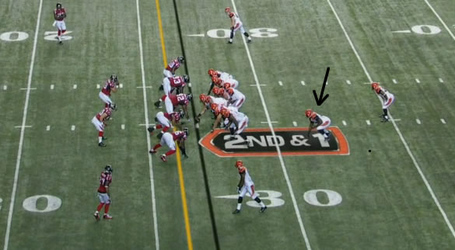 Conner fires out of his stance and wipes out linebacker Pat Schiller, opening just enough room for Cedric Peerman to gain four yards. 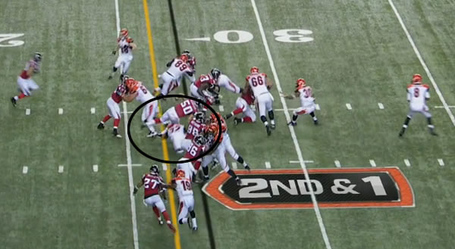 Fast-forward to the seven-second mark in the second quarter when the Bengals went for it on fourth down, needing only one yard to score. The Bengals called a power-run, with Tanner Hawkinson pulling from left to right, Trevor Robinson, Mike Pollak, Dennis Roland, Orson Charles, and Bryce Davis blocking down. 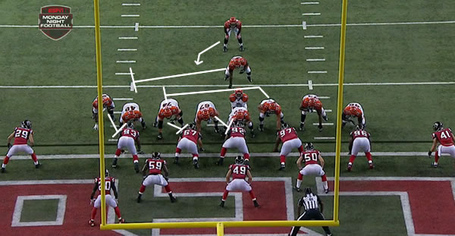 When he's not obliterating poor Falcons, he's at least maintaining the blocks. During the first play of the third quarter, Cedric Peerman squeezes out of a microscopic crease while Conner maintains a driving block on his man.

There's 6:41 remaining in the third with the Bengals approaching midfield. Bengals are in standard-I formation with Conner foaming at the mouth as a lead-blocker for Rex Burkhead. [Note: I watch these plays before deciding to include them and got pumped up (which led to "foaming at the mouth" description... we're nerds]

A linebacker blitzed into the hole that Conner was assigned. Once the collison was made, the linebacker lost the immovable object battle against an unstoppable force. 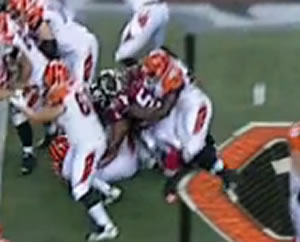 Burkhead gained seven yards on the play, but was nullified on a Ryan Whalen hold.

The last play of the third quarter, the Bengals have second and five from their own 42-yard line. Conner remains in his stoic three-stance approach in I-formation. Ball snapped and Conner turns into his well-known nickname. But we appreciate the Bulldog Missile as an alternative. 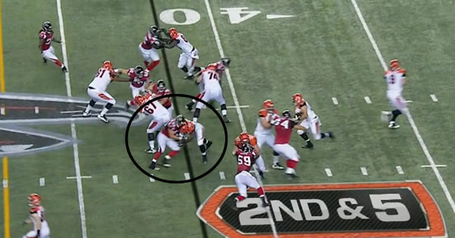 Burkhead gained 15 yards on the play.

How about the poor safety Troy Sanders with over three minutes remaining in the fourth quarter? 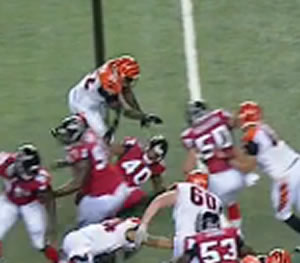 It was actually a little difficult to find plays in which the player that Conner was blocking, made a play on the ball carrier.

There's three games remaining and if this level of production and domination continues, Conner might (and maybe should) easily make this team.