We take a look at Tyler Eifert's first preseason game in the Cincy Jungle film room.

When the Cincinnati Bengals selected Tyler Eifert in the first round of the 2013 NFL draft, we can only imagine that Jay Gruden's response was similar to this.

A solid catcher that's serviceable as a blocker, the Bengals will be able to implement a duel-tight system that won't give away tendencies based on personnel packages. Look at it this way, depending on the play being called, the Bengals either have three receivers or two tight ends. It's the versatility that Cincinnati's coaching staff covets.

Eifert played the first preseason game of his extremely young career. We took a look at many of those plays over the weekend, broke down what he did and the result of the play. Keep in mind that we rarely suggest what he (or anyone else) should have done (other than catch the ball!) because we have no insight on the assignments or the plays being called (we can assume, but it's dangerous to do that).

That being said, it's obvious that Eifert is a rookie. Watching, re-watching, and re-watching again Cincinnati's win over Atlanta, his routes were simplistic. Often he'd run ten yards and then break in, out, or hook around back to the quarterback. Linebackers and safeties bounced into Eifert by the tenth yard, throwing him off his route. Granted, he wasn't targeted at all as a receiver (his lone completion, and target for that matter was nullified by a penalty). In fact, of the 21 offensive snaps that he participated in, ten were runs. But true to Jay Gruden's vision, Eifert lined up all over the field.

On the Bengals first offensive play of the game, Eifert was in a three-point stance off the line of scrimmage, outside Anthony Collins' left shoulder. Dalton fakes the handoff to BenJarvus Green-Ellis and dumps off the football to Jermaine Gresham, who slipped out into the flats in a naked bootleg. Gresham gained 10 while Eifert was used primarily as a blocker.

Two plays later, Eifert was split out as the slot receiver during BenJarvus Green-Ellis' 11-yard run. But he wasn't just a decoy against a defense playing nickel. Eifert latched into cornerback Robert McClain, turning him towards the sidelines and allowing Green-Ellis to play off the block.

With a first down and just under nine minutes remaining in the first, Eifert returned to the left slot with Dalton in shotgun. Eifert ran a ten-yard hook with a defender in his pocket and a roaming linebacker underneath. Dalton chose Brandon Tate's hook near the left sidelines, five yards deeper than Eifert's route. Incomplete. Eifert would leave the field for the next three plays and the Bengals eventually punted.

This was a one-read play. Dalton took his third step and flung the football to Gresham's slant route, picking up 11 with a nice diving effort to pick up the final 3-4 yards. Dalton threw the football away on the following down after an inside rush surprised Anthony Collins.

Eifert would actually make his only reception of the game with 5:10 remaining in the first quarter. Off the line of scrimmage in a bunch formation, Eifert waited momentarily for Sanu and Tate to clear out, slipping out in a corner route. The reception led to a five-yard gain.

It was a nice play design, freeing Eifert with Sanu and Tate distracting the linebackers for the rookie tight end to flow freely during his rote. Unfortunately, Kyle Cook was called for an (suspicious) illegal hands to the face and the drive was essentially shut down. Eifert was pulled in the final two plays before the Bengals punted.

The Falcons have a three-point lead with 2:57 remaining in the first when Cincinnati took the field for the third time Thursday. ESPN was distracted with graphics and videos of other things so they missed several seconds of the play, but Eifert was lined up at the right tight end spot and crashed down for a block. It appeared that he targeted defensive lineman Jerry Peria, who didn't impact the play. But we're not sure if he missed Kroy Biermann and moved on to the next player -- I think Eifert was attacking Peria with Clint Boling blocking Biermann. Either way, Bernard only gained a yard after Biermann made the stop.

Eifert is at right tight end on the following down and attacked Osi Umemyiora. It wasn't a dominating block. In fact, he barely made much progress but the key is that Umenyiora didn't make the stop. 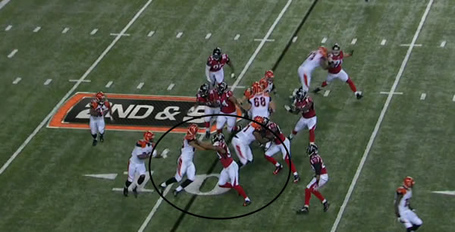 Bernard turned the corner and picked up six yards, leading to third and three with just under two minutes remaining. Eifert is back at left slot.

Eifert ran a five-yard out, but the coverage was tight. It didn't matter. Josh Johnson looked right, kept his eyes to the right, and tried to lead Mohamed Sanu down the right sidelines. Incomplete. Bengals punt.

Eifert was still playing by the :33 mark in the first quarter. It was a double-tight formation with Richard Quinn playing on the right. Eifert tried to cut Jonathan Massaquoi's legs at the line of scrimmage, but the defensive end avoided the chop and single-handedly made the stop. Still, Giovani Bernard picked up four yards -- so it wasn't a "total failure."

On the first play of the second quarter, Josh Johnson ran for 43 yards to (kind of easily) convert the third down. Eifert, in the left slot, was bounced around during his route. However, once Johnson pulled down the football, Eifert turned into an expert blocker, which allowed Johnson to break free. 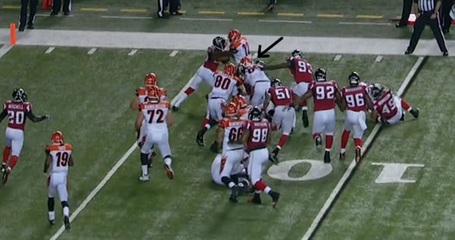 When it was all said in done, Eifert had his moments but mostly as a blocker. His participation in the passing game didn't generate much of an impact, but it's easy to forget that Eifert is a rookie -- regardless of where or when he was drafted. That said, the expectations (and our anxiety to see what he can do in a game) is high.