Share All sharing options for: Film Room: J.K. Schaffer against the Atlanta Falcons

Bengals linebacker J.K. Schaffer isn't just trying to win a job. He's trying to win a job in his home town, where he grew up, played high school and college ball with the Bearcats. Originally an undrafted free agent with the Jacksonville Jaguars, Schaffer had a one week stint on Tampa Bay's practice squad before finding himself unemployed for nearly two months. The Bengals eventually signed Schaffer onto the team's practice squad.

And right now he's on the bubble. If the Bengals keep six linebackers, figure that Rey Maualuga, James Harrison, Vontaze Burfict, and Emmanuel Lamur are locks. We factor that Sean Porter was selected in the fourth round for our reasoning for inclusion on the projected 53-man roster. Jayson DiManche is an exciting young prospect as an undrafted free agent. Vinnie Rey has his own advantage as being the Dan Skuta replacement; but right now he's sidelined with an injury.

Yet Schaffer intends to earn his way with the Bengals. Against the Atlanta Falcons, Schaffer generated a team-leading six tackles on Thursday. And he's excited.

"I feel like the good ole days," he said after the game. "Out there not thinking so much like I do in practice most of the time. Try not to make mistakes but just out there running around and feeling like a football player again, just my first time being able to do that in about a year."

With 5:45 remaining in the second quarter, the Falcons have first down at their own 32-yard line. Jacquizz Rodgers gets the handoff, targeting the right edge. Jayson DiManche exploded through the hole, clipped by the fullback but forcing Rogers to stretch out. Margus Hunt was there. Let's stretch it out a bit more, says Rodgers. That's when the free-flowing J.K. Schaffer negotiated traffic and dropped Rodgers for a limited gain. 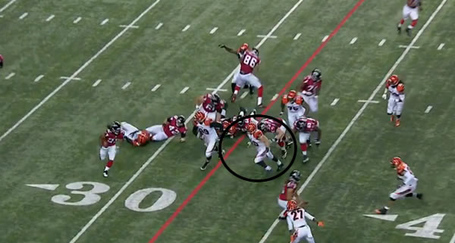 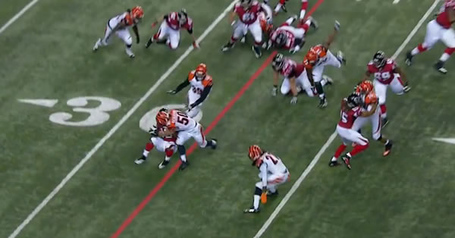 On the next play, Schaffer lined up off the right edge (from the left on the Falcons perspective). 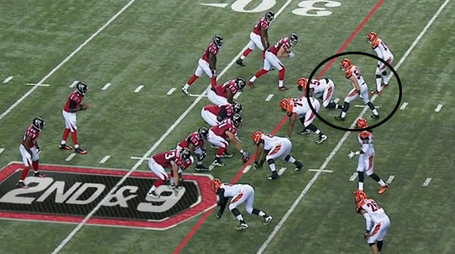 Quarterback Dominique Davis slung the pass to Jason Snelling out of the backfield. Notice the space between Schaffer and Snelling. 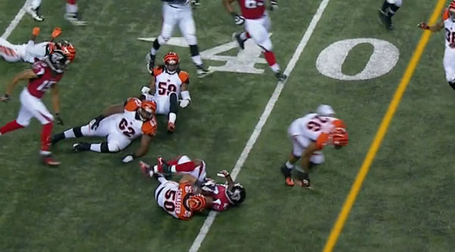 Despite the gain being seven yards when in the end, it was a good play by Schaffer to re-adjust his coverage and quickly make the tackle -- where at least four defenders failed.

Later during the same drive, thanks to a Jayson DiManche quarterback sack, the Falcons have a second-and-17 at their own 37-yard line with over three minutes remaining in the second. Cincinnati calls nickel with Schaffer and Lamur at linebacker. 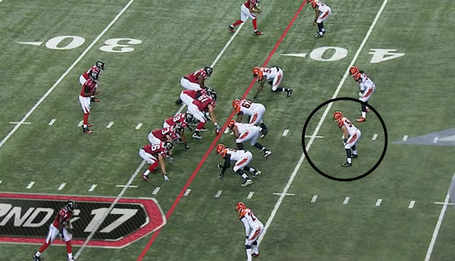 The Falcons call draw. Schaffer immediately recognized pass protection with his initial drop step into coverage. Keeping his eyes in the backfield, once the quarterback handed the football off to Snelling, Schaffer zoned in. 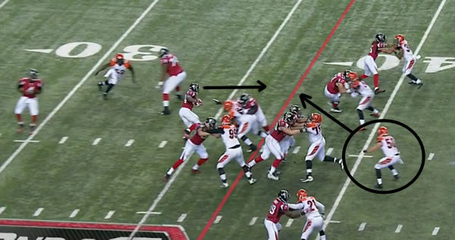 Schaffer dropped Snelling after a four-yard gain, forcing a third-and-13 as the two minute warning approached.

If Schaffer continues this level of production, he has an opportunity to backup Maualuga in the middle and play special teams, where he sprung a block for Dane Sanzenbacher's punt return for a touchdown.

"I saw him screaming down the field and tried to put everything I had into him. (Jazquizz and James Rodgers) are stocky, strong dudes, they are pretty stout, so I about knocked my own helmet off but it is all worth it when you see your guy running down the field about to score," Schaffer said. "It was a great feeling, I think I had butterflies at that point."