Film Room: George Iloka will be fun to watch against the run

We take a look at George Iloka's performance against the Atlanta Falcons and Marvin Lewis might be justified in his praise for the second-year safety.

Share All sharing options for: Film Room: George Iloka will be fun to watch against the run

Marvin Lewis hasn't held back his praise for second-year safety George Iloka. Following Cincinnati's win over the Falcons, Lewis made it a point to single-out Iloka, compared to the competing safeties looking to secure the vacant starting job.

"George (Iloka) did great. George knows what to do and how to do it," Lewis said on Saturday. "He gets people where they belong and he knows where he belongs and that’s great. I feel really good about him. Shawn (Williams) came in and played well. (Jeromy) Miles did a good job. Taylor Mays was active in there in his snaps. We’re right where we need to be there."

So we added "watch Iloka" on our to-do list with a series of plays on Thursday. It's not hard to see where Lewis is coming from.

The situation is first and ten from the Falcons 34-yard line with 13:47 remaining in the first quarter. The Falcons show a two-tight formation with a receiver wide right and another one yard outside of the left tight end. The Bengals played a compressed defense, bringing Iloka into the box with Reggie Nelson playing Cover-One.

Now the play was largely disrupted by James Harrison, who transformed into beast-mode, blowing up right tackle Lamar Holmes into running back Steven Jackson. In the meantime, Iloka threw Chase Coffman away (Jonathan Hayes shakes his nostalgic head).

Now Iloka has a clear shot while Harrison latches on. 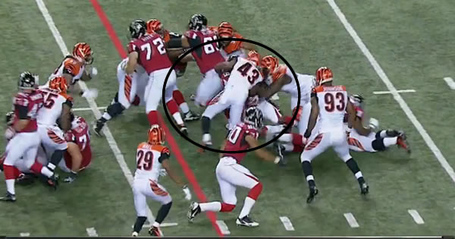 The NFL gave Harrison an unassisted tackle (this is why we rely more on the team's reference on coaching films) but Iloka clearly had an impact on the play. 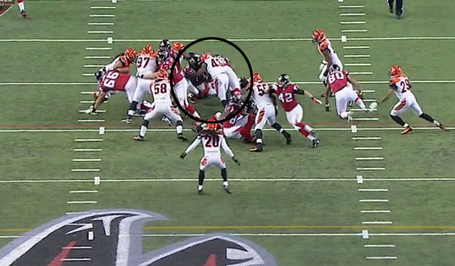 Unfortunately, Atlanta caught the Bengals unprepared for a bubble screen to Harry Douglas on the following down, who sprinted 42 yards down the left sidelines. Iloka was playing deep center field but was forced to take on left tackle Sam Baker.

In fairness, Iloka quickly identified the play, but decided to take out the blocker in hopes of the receiver getting tripped up in traffic.

More concerning was how much the Bengals were swallowed up by the screen.

Taylor Mays came in and finished out the possession; he even added a nice tackle on a run that gained four yards.

Iloka rejoined the defense when the Falcons had first down on their own 20-yard line with 7:31 remaining. Steven Jackson took the handoff and targeted the left edge, but he was redirected to the right. There was a lane. Iloka noticed it too.

Devon Still shed off his blocker and made the initial hit, but Iloka went into ballistic missile mode and drove Jackson to the ground. 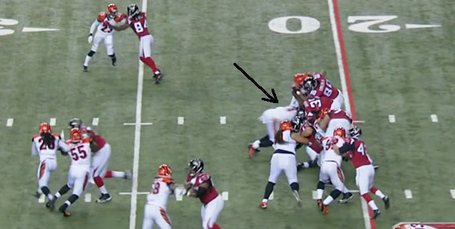 Once again, the league gave Still the unassisted stop. That's two tackles by our count that Iloka participated in that the NFL didn't recognize. But whatever.

Now we're not sure if this is Iloka's fault, but we'd be showing a disservice if we ignored it. With 3:57 remaining in the first quarter, Matt Ryan arched the football down the left sidelines for Henry Douglas, who fought through an Adam Jones interference to gain 31 yards. It appeared to be a cover one and Iloka was extremely late covering.

Now. This is where we dish out our disclaimer. We don't know exactly what was called. We can make supposition, but there are times that further clarity is needed. If it was a Cover One, then Iloka has center field and there were three receivers in bunch formation on the opposite side, one of which is Roddy White. Clearly Iloka would favor that side more, whether intentional or not, we did see this at the very end...

... but in fairness to Mays, he was moving up before the Falcons snapped the football. Mays could have been covering underneath zones or man coverage on a short route. We just don't know, so we're not going to speculate. Moving on.

The Falcons had second down with 1:29 remaining in the first quarter from their own 33-yard line when Iloka moved into the box.

The Falcons ran a pump draw and handed off to Jacquizz Rodgers, who identified a small gap on the left.

Gilberry and Iloka shed off their respective blocks and collided simultaneously into Rodgers for the stop and minimal gain.

Gilberry was given the solo tackle, but seriously. At the end of the play, Jon Gruden goes, "I like-a, Iloka." That's three.

Most of Iloka's successes came against the run on Thursday. There wasn't much of an impact in the passing game, but that was a mixture of several variables from limited participation (only 15 snaps on defense), quick throws, and zone coverages that didn't penetrate his zone. He played a lot of center field when he wasn't intimating bigger men within five yards off the line of scrimmage. There were times that Iloka was teamed with Taylor Mays on the same play; we assume that Iloka is labeled as the free safety while Mays slides in as the strong.

But in the end, we can see what Lewis sees in the kid.