Jayson DiManche, high-priced rookie free agent outside linebacker, played well in his debut against the Atlanta Falcons. We take a look at where DiManche excelled in his NFL preseason debut.

Share All sharing options for: Film Room: Jayson DiManche Against the Atlanta Falcons

Jayson DiManche played 13 preseason snaps against the Atlanta Falcons. Six against the run, another in coverage, and his one pass rush turned into a sack. He had two stops, according to Pro Football Focus, where he recorded a solo tackle constituting an "offensive failure" (less than 30% of distance to gain on first down, 40% on second down, or 100% on third down). He also managed a sack and wasn't targeted in coverage - mostly because he was in Cover 2 zones and often found himself without a man to cover.

DiManche played with the twos in the late first quarter and throughout the second and third quarters, and was used in base 4-3 formations. He came off the field for an extra defensive back in nickel packages, leaving J.K. Schaffer (36 snaps) and Emmanuel Lamur (23 snaps) or Sean Porter (19 snaps) on the field.

With only one pass rushing opportunity, DiManche bursted off the line of scrimmage, displaying an excellent first step and acceleration - and was easily the best off the line on the play. Before the snap, the Bengals showed an Under 4-3 formation with a safety (Taylor Mays) creeping into the box. They brought an overload blitz from the weak side of the line of scrimmage and Margus Hunt dropped into coverage. 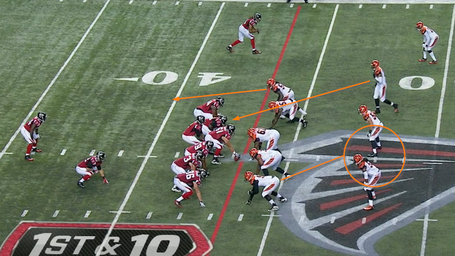 He blows by the backup left tackle, Terren Jones, as he gains the first step. Note that DiManche is already low, ready to bend around the corner that he anticipates gaining on the outside, before most of the rest of the players on the field have even moved. 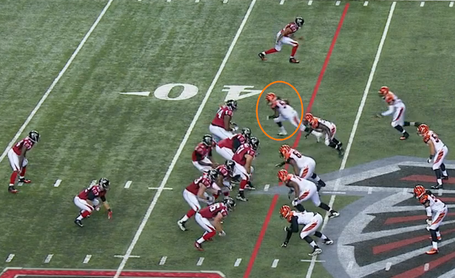 Of course, it also looks like Jones is a little confused and thinks he has help to his left (though DiManche did employ a nice chop move to free himself from Jones's one-armed block attempt), and turns his attention to the blitzing Mays. Unfortunately for Jones, halfback Jason Snelling is also coming down to pick up the safety blitz, and DiManche has a free blindside shot on QB Dominique Davis. He comes in a bit high and Davis initially escapes. 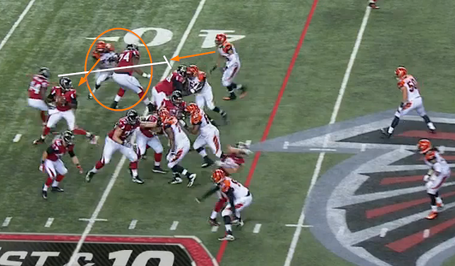 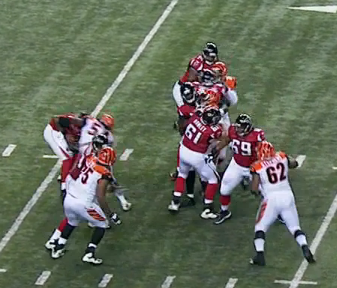 Unfortunately for Davis, DiManche has an elite motor that showed up all night, and after initially ducking a tackle, he goes down after the rookie linebacker gets a hand on him. 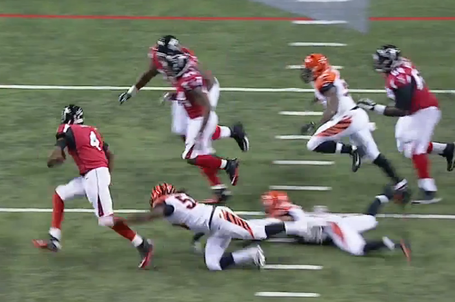 In the running game, DiManche displayed a heady mix of aggression and patience. In the third quarter, the Falcons ran a stretch play to the strong side with DiManche at weak linebacker. He crashed inside the Falcons' OT, who kicked out to seal the backside defensive end, DeQuin Evans.

Unblocked in the backfield, and with Sean Porter (56) and Margus Hunt engaging their blockers in the backfield, Josh Vaughan has limited options to make this a successful play, so he tries to kick it outside - a good choice because DiManche at this point is keeping contain well. 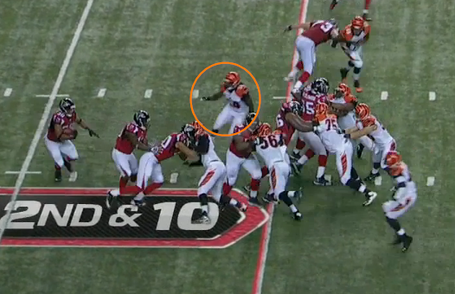 As Vaughan commits to the outside, DiManche can abandon his contain and start the chase. He has to maneuver around a few Falcons blockers in the trenches, but Vaughan is heading straight into Shawn Williams, who actually misses this tackle as Vaughan looks to cut back to the inside. DiManche, meanwhile, is waiting to clean up Williams' mess. 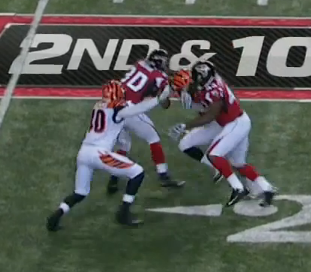 In the second quarter, DiManche found himself matched up with a charging left tackle one-on-one with the speedy Jacquizz Rodgers coming his direction. The big tackle got into DiManche's body and shoved him backwards, and that will happen from time to time - but DiManche didn't make him miss the block. 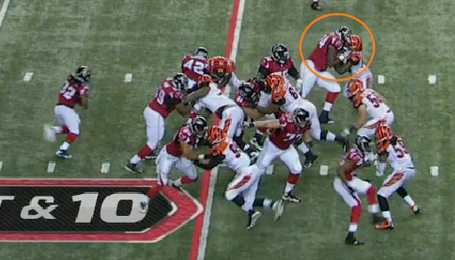 He recovered well, though, and managed to get around Jones on the outside, combining with Dontay Moch (52) on the tackle after a 5-yard gain. 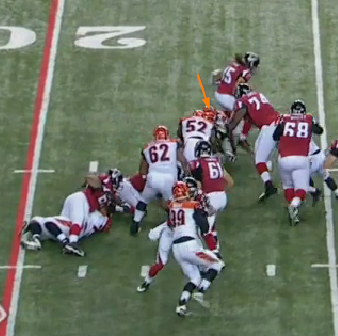 As with any limited sample size, it's hard to know exactly what the Bengals have in DiMaNche after just 13 snaps. He made a few big plays - namely playing solid run defense and coming up with a big sack - and didn't make any huge mistakes in the first game. He did a good job of making the most of his opportunity in game one.

I hope that means he's afforded an opportunity to play more than 13 snaps against Tennessee, because he's in a fun battle with J.K. Schaffer for a backup linebacker spot. He's a high-energy player and, so far, has been fun to watch.