Daniel Herron making an argument for the 53-man roster

Share All sharing options for: Daniel Herron making an argument for the 53-man roster

It wasn't until the Bengals hosted the Tennessee Titans that Daniel Herron made his best argument for the 53-man roster. Herron is currently dealing with a significant roster battle against sixth-round Rex Burkhead for the fourth and final spot on the running back roster. Herron lead the team with 81 yards rushing against the Tennessee Titans and, heading into the Monday Night Football game between the Pittsburgh Steelers and Washington Redskins, is currently tied for the league lead with 111 yards rushing in the preseason.

But it was the 40-yard touchdown that really propelled him.

The Bengals have second and five from Tennessee's 40-yard line with 14:34 remaining in the fourth quarter. Josh Johnson is in shotgun with trips right and Alex Smith at tight end on the left. Running back Daniel Herron flanked Johnson's left. 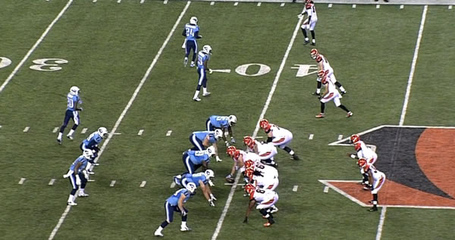 Johnson takes the snap and hands off to Herron, who approaches the line of scrimmage with a mass of bodies congesting the lanes. It didn't help that T.J. Johnson, playing left guard, was unable to drive the block forcing Herron to find alternatives.

With Jason Weaver shoving his man down the line of scrimmage, Alex Smith containing the edges, Josh Johnson wrapping around the left, and most of the Titans defense out of position, Herron flipped around and took advantage of a significant backside lane. 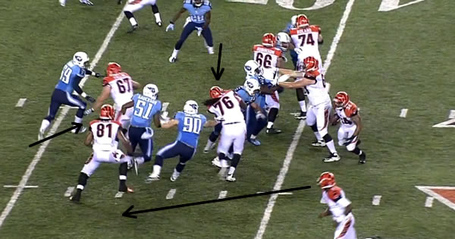 With Johnson out in front, Herron has a lead blocker while leaving behind the front seven that initially congested the point of attack. 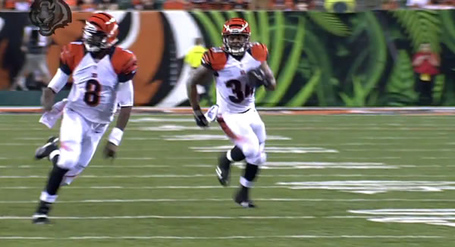 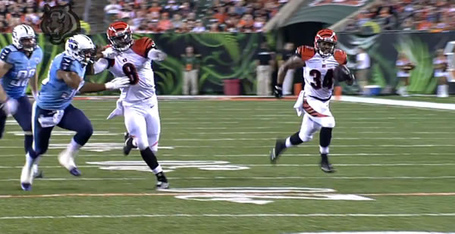 Feeling the pressure from behind, Herron dove through the front left pylon, extending his right arm (with the football) over the goalline to score the touchdown and give Cincinnati 24-12 lead. For comparison's sake, Burkhead posted 31 yards rushing and averaged 5.2 yards/rush.