Using the three-tight formation will be rewarding for the Bengals.

The Bengals used a three-tight end formation multiple times against the Tennessee Titans. Most of the time it was very successful.

Share All sharing options for: Using the three-tight formation will be rewarding for the Bengals.

The Cincinnati Bengals never had an opportunity to use a formation that utilized three tight ends last season. Like, literally. When the team released Donald Lee at the end of Sept. without any games played, they only had two tight ends on their roster. We like Gruden, but calling a formation with three tight ends when only two are on the active gameday roster is a little houdinian for our tastes. Richard Quinn was on the roster, but he played as many regular season games last year as you.

Imagine now with the Bengals drafting Tyler Eifert in the first round of the 2013 NFL draft and signing tight end Alex Smith. If there's a wish list in the form of a napkin that diagrammed formations with three tight ends, you can be assured that it finally transferred to the team's offensive playbook. Think about that threat. Sanu at wide receiver, Giovani Bernard in the backfield, Eifert and Gresham going into routes as tight ends and Smith staying in to help pass protect? Or let's run the football. It doesn't matter. Either can happen out that package and that's a scary prospect for opposing defenses. It's an intriguing threat in Jay Gruden's arsenal.

Offensive coordinator Jay Gruden applied the three-tight formation several times on Saturday and with mostly positive results. Nearly every formation had Jermaine Gresham and Alex Smith on the line of scrimmage, with Gresham on the same side with Mohamed Sanu. Eifert was off the line of scrimmage (required, unless you want an illegal formation) usually to the side opposite of Sanu, but Eifert went into motion more than once.

The Bengals have first down from their own 28-yard line with 6:46 remaining in the first quarter. Cincinnati applied a three-tight formation with Giovani Bernard as a single-back, eight yards off the line of scrimmage.

Great run blocking from Mohamed Sanu, Jermaine Gresham (and a nice little hold), and Andre Smith, who opened the lane for Bernard to turn the edge off the right side. 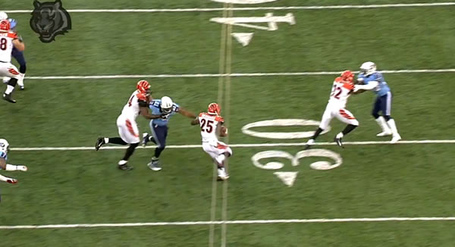 Bernard picked up nine yards on the play.

So successful that play was, offensive coordinator Jay Gruden called the same formation. Smith and Eifert lined up to the left with Gresham right. Sanu remained as the only wide receiver on the field with Bernard as the single-back. Hell, let's call the same play.

Sanu, who is a far superior blocker than we've mentioned previously, stays between the ball-carrier and the cornerback. Gresham beautifully targets and neutralizes the linebacker. Andre Smith was popped at the start of play forcing him back on his heals momentarily, but his guy didn't make the play.

Another nine yards are gained.

Why not, let's do it again.

With a slight variation.

Andy Dalton hands off to Bernard, who follows the zone blocking from his offensive line.

Anthony Collins clears out his man, with a little help from Jermaine Gresham's initial block, while Kyle Cook and Clint Boling neutralize their assignments. The lane is massive for Bernard. 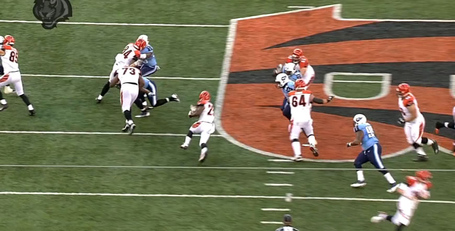 Eventually the Bengals have first and goal from the Titans one-yard line. The Bengals use their three-tight formation, replacing Mohamed Sanu with H-Back Orson Charles at fullback.

Boling and Collins double-teamed defensive tackle Sammie Hill while Kyle Cook made enough happen against Antonio Johnson that ultimately allows Bernard to lower his boom stick for the touchdown.

Using the three-tight formation will offer the Bengals more options, from personnel packages to the nature of those plays being called. Do they run? Will they pass? Theoretically Eifert and Gresham pose serious match-up problems against linebackers and safeties and there's consumption of attention with Bernard hanging out in the backfield. On the other hand, running the football might be Cincinnati's most consistant philosophy to gain yards.