We take a look at how Rey Maualuga performed against the Tennessee Titans last Saturday.

Share All sharing options for: Film Room: Rey Maualuga against the Tennessee Titans

One of the secondary storylines during training camp, carried over from the offseason, was Rey Maualuga's return after a game-to-forget in Houston last January. Cincinnati signed the fifth-year linebacker to a two-year deal earlier this year; a move many fans vehemently disagreed with. Would he be able to improve after a pedestrian showing for two seasons as the team's middle linebacker? The coaching staff has constantly defended him to the point that defensive coordinator Mike Zimmer believes that fans are incorrectly attaching his name to mistakes that weren't his.

Either way there's a reason why Maualuga wasn't heavily sought-after during free agency, or why he didn't receive a significant raise with his new deal (aside from the average increase with a second deal after the rookie contract expires). So he's not the all-star player that people had hoped for. He's no Alvin Mack. Nor is he the real world example of a Pro Bowler chewing on bubble gum made of spikes, broken glass, and tears of broken dreams.

Fortunately for Maualuga, he has an opportunity to wipe the slate clean and become something better than what he was. And Chris Johnson and the Tennessee Titans rushing offense was a good test.

We have 12:32 remaining in the first quarter from midfield. The Titans call a counter to the left. Initially Maualuga followed his keys which pulled him out of position, making him a prime target for an offensive lineman blocking inside. Instead, Maualuga takes a bee-line towards the sidelines, fights through a block and helps Vontaze Burfict drop Chris Johnson for a limited three-yard gain. Also notice how the defensive line held their blockers, giving the linebackers freedom to roam. 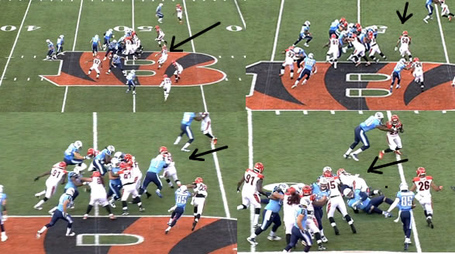 Recover from a false step on a redirection? Check. Quickly identify and angle the attack to meet the ball-carrier? Check. Fight through the block and make (or help) the tackle? Check.

But it was the play at the 10:55 mark in the first quarter that I liked. With the Titans driving to Cincinnati's 28-yard line, the Bengals use nickel.

Jake Locker hands off to Johnson, who targets the left edge. Wallace Gilberry is quickly neutralized, leaving a significant amount of grass for Johnson to play with.

If you need help understanding why the Bengals have one of the best defensive lines in the NFL, realize that it's not just about the pass rush. It's the amount of effort required by the opposing offensive line to shed off those players and reach the second level. Cincinnati's defensive line doesn't make that easy and the team's linebackers are given more space and freedom to flow to their points of attack. 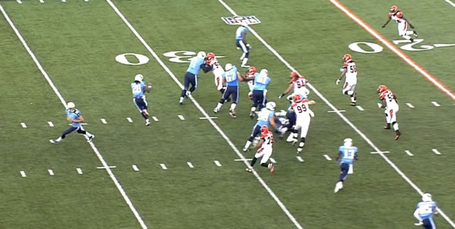 Maualuga takes advantage of this. As Johnson turns the corner, forced to stretch the play by a recovering Gilberry who recovered from his initial disadvantage, Maualuga athletically (yes, I used that term), strafes into Johnson's field of vision and mirrors his cutback to wrap the running back for the tackle. 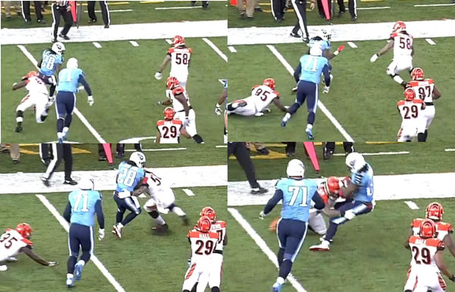 The Titans ran the football three times during their opening possession. Maualuga made stops on two of those plays.

With 11:27 remaining in the second quarter, Maualuga navigates around two offensive linemen to stop Shonn Green for a limited two-yard gain. And at the :58 second mark, Maualuga exposed a protection flaw. His blitz pressured Jake Locker into a bad throw down the right sidelines.

Even when he's not directly making the tackle, he's affecting the play regardless. With 8:10 remaining in the first, Maualuga takes on the lead-blocker and trips up Chris Johnson just enough for Wallace Gilberry to shut the play down. 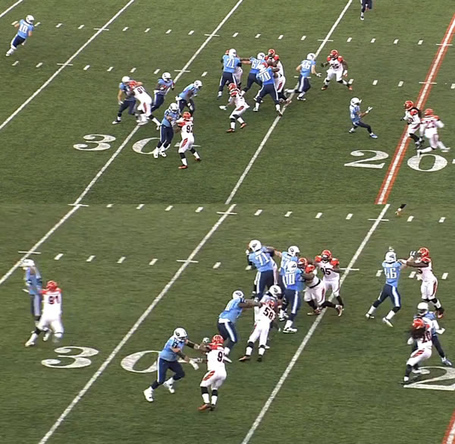 You can shrug the effort all you want, but that's a good play. Maualuga filled the gap and fought through the blocker. Where is everyone else?

Yes, yes. But what about those pass coverage concerns?

Jake Locker rolled out on third and two with 13:40 remaining in the first. Maualuga picked up tight end Craig Stevens. Nothing there. 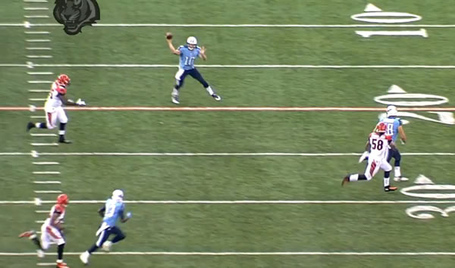 Beyond that, the Titans didn't actually target any backs, tight ends, or zones that Maualuga was assigned.

We're not here to tell you that he played great, good, or remarkably better. There were a few plays with tepid steps, or without that vicious aggressiveness when a play is coming at him. Chris Johnson knocked off a 17-yarder with a blocker driving Maualuga downfield -- though he eventually tackled the running back from behind. Nate Washington caught a four-yard pass with Maualuga in the vicinity.

But what we've noticed is that his decision-making process is quicker, relying more on instinct rather than hesitation that showcased uncertainty.

Maualuga is a complex player that's extremely divisive among the fanbase. Will he improve, who knows. But as we pointed out earlier, he has an opportunity to right the ship.