Bengals Andy Dalton says that his ankle is fine

Bengals quarterback Andy Dalton turned his ankle in the first quarter, which could have been a disaster.

Share All sharing options for: Bengals Andy Dalton says that his ankle is fine

On third and ten with 4:16 remaining in the first quarter, Andy Dalton lobbed the football over the middle targeting Mohamed Sanu's crossing route. Sanu broke attempted tackles from Bernard Pollard and Coty Sensabaugh with a stiff arm that world hasn't seen since Corey Dillon. The second-year receiver broke down the left sidelines before he was knocked out of bounds at the one-inch line by Michael Griffin (initially called a touchdown). The 24-yard gain set up Giovani Bernard's one-yard touchdown run on the following play.

However, after the throw to Sanu, Dalton took a step back and his right foot got tangled up with Anthony Collins that caused his foot to bend inward. 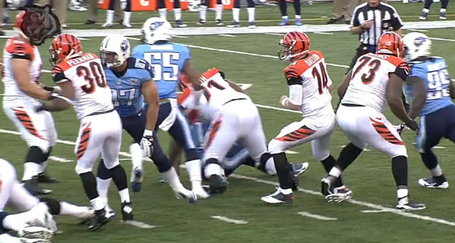 Dalton immediately fell to the ground and limped -- well, walked gingerly -- to the sidelines as the officials were reviewing the play. Once the football was spotted following the reversal, Dalton returned to hand off the football to Bernard, who navigated between Kyle Cook and Clint Boling for the touchdown. Dalton had his ankle re-taped right after the touchdown. 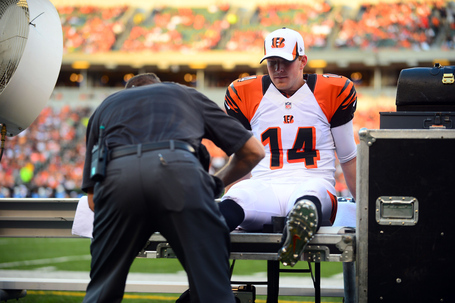 Dalton, who was given the day off during Monday's practice at Springboro High School with 6,800 in attendance, said that his ankle is fine.

"They gave me a little rest I guess," said Dalton via Bengals.com. "It's all right. I still did stuff, I just didn't do team today."

Josh Johnson and John Skelton did the 11-on-11 work today.