Mike Zimmer is one hell of a defensive coordinator. It doesn't matter which players he's been given to work with. He makes his defense into an annual top-ten unit. Now, he finally has the players he needs to execute his vision--a brilliant masterpiece.

The defense of Mike Zimmer is very, very unique.

It may seem like a normal 4-3 defense at first, but peel back the layers and you will find something extraordinary. The defensive line is very strong, very physical, and very good at controlling the line of scrimmage. Guys like Geno Atkins and Domata Peko can eat up double teams, while a slew of edge defenders (Michael Johnson, Carlos Dunlap, Robert Geathers, and especially James Harrison) are all abnormally good at setting the edge.

When it all works as planned (and it usually does), there aren't any holes to run through. The running back has no choice but to run straight into a mass of people in front of him. The good running backs might try to reverse course and cut back into open space.

That, my friends, is where our "inside" linebackers step in - Vontaze Burfict and Rey Maualuga. These men have their eyes trained on the running back the entire time. If the ball carrier tries to cut back, they're ready for it. It's a two on one, really. Burfict has one sideline and Maualuga has the other. Or, if the running back runs into the mass of people, it's just a simple game of seek and destroy. Find the guy with the ball. Destroy him. Repeat.

You might not trust Maualuga's sideline-to-sideline speed yet, but you will. Something happened to Maualuga this offseason. He's thinner. He's faster. He's reacting quicker. He's where he's supposed to be. Just take a look at our film review of Maualuga from the Titans game. This is a new Rey Maualuga. You might not believe it yet, but you will see it on the field this year.

He's not being asked to be an every down linebacker this year, which may have been his biggest flaw last year. He became slow later during games. Remember when Robert Griffin III simply ran around him? Maualuga was too fat and too slow to be playing every single snap per game. Last year, all Maualuga was good for was a big hit. Now, he's flying around the field like he did in college. Again, check the film room.

At the same time, it's probably good motivation to play better when you have a kid behind you that's younger, faster, cheaper, and perhaps even more talented.

Enter Emmanuel Lamur - a kid who can really cover sideline to sideline. Linebacker coach Paul Guenther only had one word to describe him - "Zoom". He's built how you want good coverage NFL linebackers to be built - 6'4", 240 pounds, and he can run like a gazelle.

Even though Lamur didn't get drafted, Marvin Lewis saw something in him. He actually started as a tryout player in 2012 at Bengals rookie minicamp, but by the end of the year, he was playing significant snaps as Vontaze Burfict's partner in crime as the two nickel linebackers.

However, Lamur still has a few things to learn with the run defense. He had problems with it in college (he was too skinny, he missed tackles, and he took bad angles). It was probably the reason he went undrafted. During this offseason, Lamur bulked up. He added over ten pounds of muscle (likely in a move to try and steal the starting job from Maualuga), and it made a big impression on the players and organization. Just take a look back at this article from August 1. Lamur got praise from Andrew Whitworth, Hue Jackson, Marvin Lewis, Vontaze Burfict, Terence Newman and Paul Guenther. That's no small feat. In fact, you'd think Lamur would be the starter this season after all that.

Nope. There's something in Marvin Lewis and Mike Zimmer that will never die - their belief in Rey Maualuga. When everyone thought there couldn't possibly be a reason to re-sign Maualuga, they re-signed him for over $3 million per year. It ticked a lot of fans off to see that - including myself.

But the thing is, Zimmer and Maualuga might be right. Maualuga could lead the team in tackles this year.

Let's think back for a second. Last year, Zimmer would substitute Lamur in for Maualuga on passing downs. Manny Lawson would also come out for Adam Jones. This is the Bengals nickel defense. Here is a picture of the 2013 nickel defense for you visual learners. This is also called a 4-2-5. 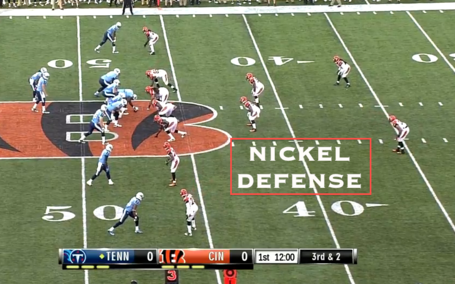 Note: Starting safety George Iloka and starting defensive ends Michael Johnson and Carlos Dunlap did not play in this game due to injury.

In the above picture, Rey Maualuga and Vontaze Burfict are the two nickel linebackers, while James Harrison subs out for a fifth defensive back - Adam Jones. Also notice that Leon Hall slides inside to cover the slot receiver.

That's good and all and it worked most of the time last season, but switching personnel in the middle of a drive won't work against certain quarterbacks - guys that can dictate the pace. Guys like Peyton Manning, Tom Brady, Drew Brees and Aaron Rodgers. Heck, Ben Roethlisberger and Joe Flacco can run a little no-huddle too. You see, the "no huddle" is taking over the NFL nowadays and these quarterbacks can literally think faster than the defenses they line up against.

These quarterbacks can keep whatever defensive personnel on the field that they want, because they move their offense up to the line of scrimmage as fast as they want. That's trouble for a defense that wants to switch personnel every time they think the offense is going to throw it.

So, Zimmer is changing too. It starts with James Harrison. We saw a little bit of it in the preseason game against the Falcons. I've been watching the way James Harrison lines up ever since camp started, and it's been changing. They are letting him do a little more every day.

In the Titans game, Zimmer revealed an entirely new wrinkle. Ladies and gentlemen, I'm pleased to present to you Zimmer's new 3-3-5 defense. 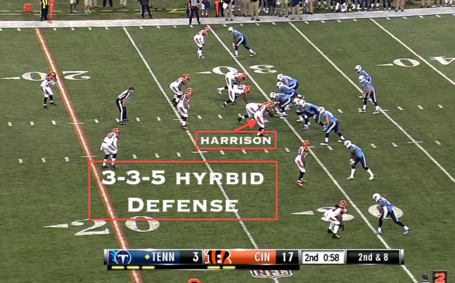 The key piece is James Harrison, who can line up as the right defensive end, or stand up as the strongside linebacker. Whatever he and Zimmer want at that particular moment.

This defense could be used against two-minute drills and hurry up offenses. Anything up tempo, usually with multiple receivers.

Now, Maualuga and Harrison may never have to leave the field (you might hate that sentence, but it's true). Zimmer can show both 4-2-5 looks and 3-3-5 looks - with the same personnel. Versatility, versatility, versatility. If you've been paying attention to training camp reports, you'll recall that Jay Gruden's new offense is based on versatility as well. Genius, right? The entire Bengals team can change based upon who they are playing. But, I'll get to Jay Gruden's offense in another article.

Anyway, to be very clear, the 3-3-5 is not the defense you will see most this year. These two defenses shown above are simply variations. Alternate uniforms, if you will. 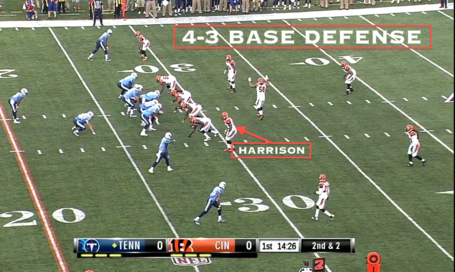 Zimmer can change to the other defenses whenever he wants. I may have confused you here, but just keep looking at the pictures until you see what's happening. It's all about the linebackers.

Let's move on to when the Bengals are playing slower quarterbacks. Perhaps against quarterbacks like E.J. Manuel and the Buffalo Bills, Mark Sanchez and the Jets, or Christian Ponder and the Vikings. Now, you can go back to the old 2012 nickel defense if you so choose. These quarterbacks are so slow, they actually let you put in whatever personnel you want against them. That's when you turn Emmanuel Lamur loose on them. Lamur can come in off the bench and shut down whoever they send his way in coverage.

Maybe, by the end of the year, Lamur will have proven he is better than Maualuga. Maybe. It all starts at stopping the run. Stop the run and then cover the pass on third and long.

This is Zimmer's system. It works--just look at the track record since he took over the defensive coordinator job in 2008. It gives up yards underneath sometimes, but it usually ranks very well in scoring defense (points allowed). In the final nine game of the season last year (including the playoff game), the Bengals defense didn't allow more than 19 points once--that's what you call a shut down defense. In the final eight regular season games, they ranked first in scoring defense, second in sacks, second in turnovers, and third in yards allowed. They controlled the entire game and, most importantly, they kept the games in reach for Dalton and the anemic offense to keep trying all game long.

Zimmer's defense literally carried the Bengals to the playoffs when Gruden's offense started sputtering. It stemmed from injuries to certain players (Sanu), Dalton losing his confidence, and a general lack of offensive ingenuity by Gruden himself. Then, Gruden got to the playoff game and started overthinking. He didn't target A.J. Green in the first half. Why? Because that's the last thing the defense would expect. Unfortunately for Gruden and the Bengals, that strategy didn't pay off.

On the defensive side, if you remember, Zimmer's defense actually gave up a lot of yards in the playoff game against Houston--420 yards to be precise. Yet, only 198 yards for the Bengals offense.

Why, it must have been a blowout! Not in the least, as the end result was a Bengals loss by the tune of 19-13. Mike Zimmer's defense gave up 420 yards but only 19 points. It's a bend-but-don't-break policy. In the red zone, they tightened up and held the offense to field goals. That's what happened in the Houston game last year. Shayne Graham kicked three field goals of under thirty yards and that's very rare for a kicker to do in a game.

In the game, Zimmer used his base defense more than he had in the regular season (which meant a lot of Rey Maualuga and Manny Lawson). Sadly for us, they both got exposed- particularly Maualuga. I pinned a lot of yards on Maualuga when I reviewed the game, which made me even more angry when they resigned him.

But, take a step back for a second and take a deep breath. Players can change--they mature and the game can slow down for a guy with a few years of accrued experience. They figure something out. We've been waiting forever to see it from Maualuga, so I know I sound like a broken record here. But, watch Maualuga in both the Falcons and the Titans game. He looks much better. Faster. Thinner. More confident.