Film Room: The Jeckyll and Hyde of Jermaine Gresham in Run Blocking

Share All sharing options for: Film Room: The Jeckyll and Hyde of Jermaine Gresham in Run Blocking

Jay Gruden sung high praises for Jermaine Gresham after last weekend's preseason game against the Tennessee Titans, which led to the narrative early this week that Gresham will be the Bengals "blocking and YAC" tight end, while Tyler Eifert will assume the "joker" role.

We are all aware that Jermaine Gresham has elite strength and size at the tight end position and has shown dramatic improvement in his ability to generate yards after the catch. The hurt he put on Atlanta rookie Desmond Trufant shows off both of those skill sets.

Gresham is irrefutably a nasty, strong, and brutal athlete. Listed at 6'5", 260 pounds, he generates a huge amount of force when he gets moving in the open field. When he's blocking, though, he doesn't always get the most out of that strength. Part of this is because he often draws difficult assignments because of Gruden's faith in his blocking ability. He routinely is matched up 1-on-1 with defensive ends. But beyond raw strength, blocking is about leverage, footwork, and hand position, all of which can give Gresham some issues.

Pro Football Focus graded Gresham's blocking against the Titans negatively: He earned a -1.0 in run blocking, and a fairly neutral -0.3 in pass blocking. Earlier this week, Josh took a look at the Bengals' success in 13 (three tight ends, one running back) personnel. In the pass blocking game, he was beat on one play on the first drive, but did very well on his other 3 pass blocking attempts. This is something we'd like to look into when there's a larger sample. Today, we'll dive deeper into Gresham's significant run blocking attempts - he had nine run-blocking snaps - to see where he succeeded and failed.

Sometimes, it's Jeckyll and Hyde

First, and perhaps most controversially, Giovani Bernard's first big carry of the game came on a stretch play to the weak side. Gresham had most of the responsibility for setting the edge on the play. With just seven in the box, versus eight blockers, the Bengals have a positive outlook at the snap. Note that they are lined up on the left hash, and Bernard will not receive the hand off until he's nearly to the right hash. 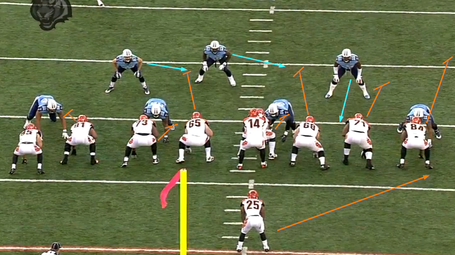 As Bernard takes the ball from Andy Dalton, the corner looks awfully promising. Not pictured here is Mohamed Sanu winning his block on the right edge. The only wrench at this point is that the Titans' weak side backer, Zach Brown, has crashed inside of Andre Smith, forcing a lunging chip block to push Brown off of his line at Bernard in the backfield. At this point, Gresham is winning his block against Titans' defensive end Derrick Morgan.

As Bernard reaches the corner, and all of that green space, Gresham begins to lose contain on Morgan. Sanu has sealed off his man, but Morgan has moved Gresham into Bernard's initial running lane. This isn't disastrous for the play, as there's still plenty of space between Sanu and Gresham, and Bernard is agile enough to get further outside and through the hole. But look at how far Morgan has pushed Gresham into the running lane, while Gresham has been unable to move Morgan backwards. The positive is that he's maintained his block. The negative is that he hasn't controlled it well enough.

As Josh pointed out at this point, good running backs can and should run through arm tackles, and often have to make at least one man miss. Bernard's skill set allows him to continue outside and elude Morgan's outreached arm, while Gresham may get away with a bit of a hold as Bernard runs by. Gresham barely got enough on him to allow Bernard to slip by, and avoid a minimal (zero-to-one-yard) gain on the play as the original line of scrimmage was around the 26 yard-line.

Instead, Bernard scampers to the 37, where he's tackled by safety Michael Griffin. 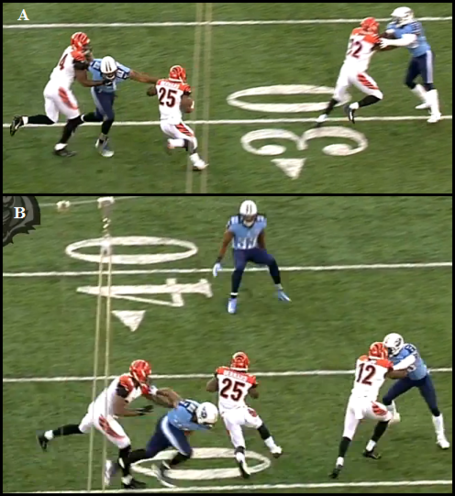 Here's how that looked in game speed. It looks like Morgan gets under Gresham - who is a little too upright - and Gresham stops moving his feet when Morgan gets outside of him. Bernard really made this play, and I think that BenJarvus Green-Ellis would have been slowed down or tackled by Morgan if he were in Bernard's place. Positive for Bernard, and perhaps a negative grade for Gresham.

The Bengals happened to run the same exact play the next time around, except this time Gresham was responsible for the weak linebacker, Brown, as Andre Smith handled the defensive end. Essentially everything else, from a blocking perspective, was the same. 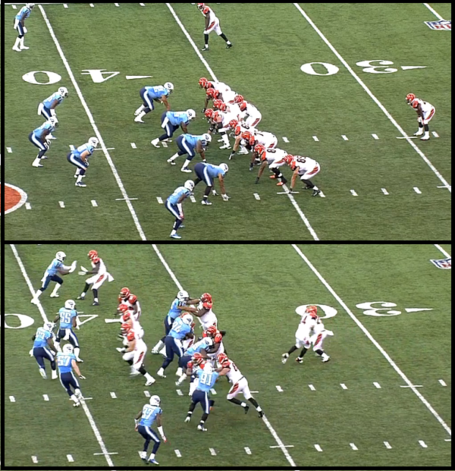 Remember what Gresham did to Desmond Trufant with a full head of steam? Something similar is about to happen to Zach Brown, who has about 60 pounds on Trufant. Sanu sort of gets beat on the outside, but Gresham is into Brown's pads and moving him backwards, extending Bernard's run. If Brown were winning at this point, he'd either shed his block and stop Bernard, or have pushed Gresham into Bernard's path.

Instead, Bernard takes it another 5 yards before he's finished off by Griffin, and Brown is going down. It's not entirely clear in this photo, but to Gresham's left and behind Clint Boling and Patrick Bailey (57), Brown is horizontal. 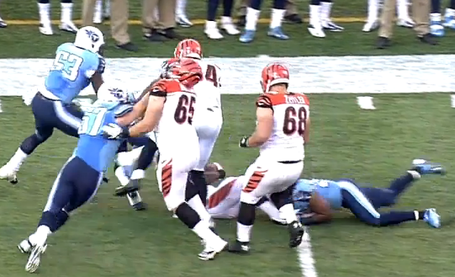 Perhaps seeing it in motion would help illuminate just how dominant Gresham's block was on this particular play. He gets into Brown's pads, gets leverage, and uses lower body strength to drive and finish the block.

Is this Mr. Hyde?

Later in the first quarter, the Bengals sent Bernard off of the left tackle (another weak-side run, for those counting), and Gresham found himself matched up with Zach Brown in space again. The guards, again, have responsibility for the linebackers along with Gresham. 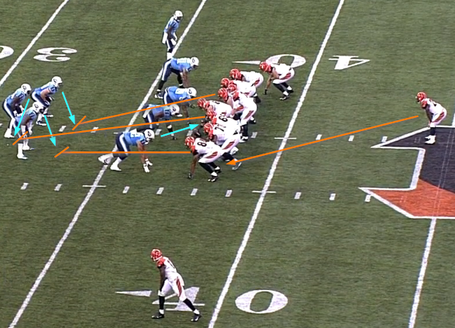 There's some running space here for Bernard, but Brown almost immediately beats Gresham to the inside this time and keeps Gresham's hands off of him with a finesse move to the inside. Brown's got a bead on Bernard as Gresham fails to engage. 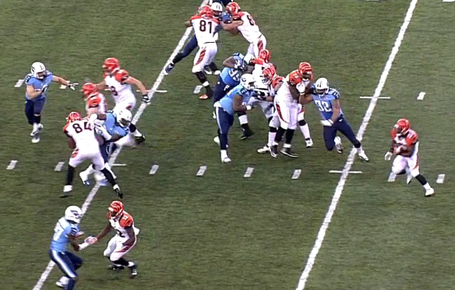 Bernard is shifty enough to remove Brown from the play and gain positive yards, but Gresham barely impacted the play and is without a man to block after Brown gets by. The reason the Bengals gained more than a yard here is mostly because Brown misses a tackle, or Bernard forces a missed tackle, depending on how you look at it. 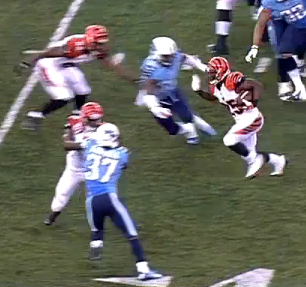 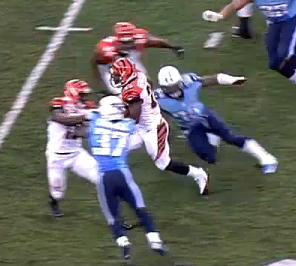 Bernard scurried out to about the 32 for a five yard gain before Michael Griffin, again, came from safety to bring him down. That's a testament to Bernard - but you've got to hope Gresham finds his man in space, because when we've seen him engage his target (especially linebackers) in space, he's had good results putting his strength to use.

Focus on Gresham and Brown in this animation, and you'll see what I mean. Gresham whiffed on this one, but Bernard's decisiveness, agility, and burst made Brown a non-factor.

I haven't seen every tight end in the NFL block, but I'd venture to guess that the best blocking tight end last year was more consistent than Gresham. Just in this game, he dramatically won and lost blocks on several different occasions. Part of his struggles last year came because there was just too much asked of Gresham. These three plays are kind of a microcosm of larger themes.

I am still smitten with Gresham's potential. He's huge, he's strong, and he does a lot of things really well. He looks like the best blocking tight end in the league sometimes, and other times he seems to whiff. Hopefully this year, we get more dominance, because as we've highlighted, 2- and 3-tight end formations could be a thing of beauty for the 2013 Cincinnati Bengals.