We take a look at the latest episode of Hard Knocks.

I'm not sure if it's because the players are more likable. Or if the storylines are better. Maybe the coaches and players are just more relaxed. Or maybe it's just because this is more recent, therefore more dominant in collective minds. Either way if we're comparing '09 and '13, this year's version of Hard Knocks is just better. You enjoy following Giovani Bernard as he adapts to the life in the NFL, forced to deal with the human side of things with Larry Black's injury or Aaron Maybin's release, or witness Marvin Lewis' taking part in the fun bantering with his players.

Maybe it's just this team.

The camaraderie goes without saying. These guys genuinely appear to enjoy each other's company. There doesn't seem to be much division; it's a team being a team. I would go with cliche-like phrases that this team is a family, but someone might point and laugh and I tend to be self-conscience about such things.

A few things from Tuesday's show.

James Harrison, the man that hates the Hard Knocks cameras, tells Geoff Hobson (after returning his recorder) that they doesn't deserve to be here and then suddenly allows NFL Films to join him during one of his acupuncture sessions.

We're not sure if we'd rather see a semi-naked Domata Peko straightening his hair with a towel hanging on by a paper clip or Harrison's cheeks getting penetrated by little needles. And three hundred? Lord.

Either way, now we're not sure if we want the cameras following Harrison anymore. Well played, James. Well played.

Mike Zimmer on pronouncing Jayson DiManche's name: "What is No. 54's first name?" "Jayson." "Jayson? Oh, that's not so bad." DiManche stands for "Sunday" in French. But "Sunday" was noticeably winded during Saturday's game against the Titans and linebackers coach Paul Guenther and head coach Marvin Lewis called him out for it.

In fact, Hard Knocks played the "oh no" sad music at various points during the game, capped by the touchdown he allowed in the second half.

Margus Hunt acting like special teams coordinator Darrin Simmons and diagramming a play in the shape of a penis. Very South Park-like, which I appreciate very much. 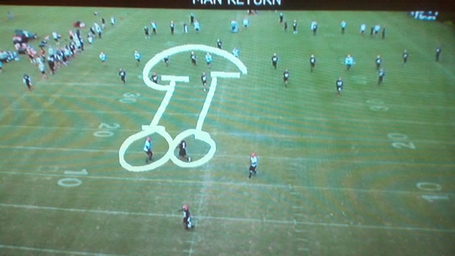 But Roy Roundtree's imitation of Taylor Mays? I had to pause it so I could let the uncontrollable laughter filter through my system. And then watch it again. Words will never do it justice.

Coming off the field, Hunt is given a water bottle from a teammate and the rookie defensive end proceeds to drink. However, since the top was unscrewed, the water unloaded and drenched his face. Don't worry, Hunt was cracking up. Domata Peko offers advice, "Never take water from anyone else but the water guy."

+ Best Caught In The Moment

BenJarvus Green-Ellis getting a lift from Mike Brown on his golf cart to practice. Marvin Lewis caught it, joked with surrounding players, "have you ever gotten a ride from the owner". Later Lewis used the NFL Films footage during a meeting with all players, showing and then highlighting Green-Ellis' gentle tap on Brown's right knee. The player's lost it. But that's why it's impossible to dislike this team.

George Iloka getting into a fight with Jordan Campbell during special teams work. Iloka ended up punching Campbell in the helmet and hurt his wrist. Of all the people encouraging him was fellow competitor Taylor Mays, saying you can't go out like that.

However, Iloka was called to the coaches office for Marvin Lewis' "you can't do that" speech, which I'm sure Iloka learned. Second lesson? "Make sure his helmet is off first."

Our introduction to Iloka on Tuesday: "I'm not as young as I used to be. I'm kidding. I'm young as hell."

Well, I'm just not sure. He's just a unique gentlemen with an arsenal of backpacks with enough material on hand to improvise dressing up as a Teenage Mutant Ninja Turtle. Alright. Best Taylor Mays moment was Roy Roundtree's video. I won't forget that for a long time.

+ Time To Cut Him Moment

Mike Brown asking Paul Guenther about Aaron Maybin: "You don't need him, do you?" Guenther said about 100 words before Brown said, "We'll send him on his way."

It wasn't a moment like The Turk's in '09 with J.D. Runnells that will go down on a Hard Knocks greatest hits. In fact it was exceptionally professional on both sides between Maybin and Marvin Lewis at the end. Maybin seems like a good kid. I hope he makes it on somewhere or finds success as an artist.

+ The Love for Mike Zimmer

Marvin Lewis acknowledges that Zimmer is like a father to most of these players. Adam Jones called him the father that he never had and praises the defensive coordinator for helping him "play the best football" of his career.

But the most revealing was the relationship between Zimmer and his second-year stud linebacker. Vontaze Burfict still believes that he hasn't earned Zimmer's trust. Zimmer admitted that he got on Burfict out of the gate last year because of the stories out of college when he signed with Cincinnati. In the end, Zimmer said "I got his back." So I'd say that Burfict has earned it.

Hue Jackson had his weekly moment with Orson Charles, instructing him to walk like a duck (which helps with foot placement as a blocker). Funny. Michael Johnson was doing some stretches and Zimmer calls him for walking like a duck. Why is that? Because of all that money he has to carry, Zimmer motions to the delight of the players around him.

Tight end's coach Jonathan Hayes after Tyler Eifert's first reception (that wasn't nullified from a Kyle Cook penalty): "You're not a virgin anymore."