Tale of the Tape - Bengals vs. Cowboys

Forget X's and O's. Let's dive deeper into what really matters as the Bengals face off against the Cowboys this week.

Share All sharing options for: Tale of the Tape - Bengals vs. Cowboys

I can't begin to describe my feelings for the Cowboys as well as one of their own fans did on the popular blog Deadspin:

We are the Notre Dame of the NFL: brilliant marketing, a distant history winning that inspires nostalgia, a legacy of creepy conflation between God and football, and a gift for Bogarting the media's joint. As a result, Cowboys fans live in a funhouse of mirrors that make every player look larger than they really are, right up until the moment a real playoff contender comes in and trashes the place.

The revolving door of Cowboys coaches has led to the lack of success for the team. As Bengals fans we think we have a hard time with our owner, the Cowboys have taken it to a new level with theirs. (more on Jerry Jones to come)

Currently Jason Garrett is the head coach and has just this season decided to pass off the playcalling duties. After back to back 8-8 seasons it is rumored he is on the hot seat if there is no playoff run this season. In attempting to fire up his team he said the following:

"You want guys who are leaders. Step up and be a F***ing leader. Lead this football team. Lead it!"

I feel like I have heard this before? I think this is a direct Marvin Lewis rip:

"It's your football team find a way to fix it. Reach down inside and be a F***ing Pro!"

Edge: Marvin Lewis and the Bengals

A.J. Green is rumored to be on the field this weekend so we match him up against the Cowboys young standout receiver Dez Bryant. While Green has been an outstanding talent on the field, his demeanor and lack of flamboyance off the field is a breath of fresh air for the Bengals fans.

Dez Bryant, on the other hand allegedly hit his mother in the face with a baseball cap and grabbed his mother by her t-shirt, causing her bra to tear, according to a police report.

So who wins this battle? The outstanding talent for the Bengals or that guy?

Edge: A.J. Green and the Bengals

Tony Romo is a well paid quarterback who has a history of choking in big games. Andy Dalton is a young QB who has been to the playoffs in both of his NFL seasons. However, once there he has not performed the way Bengals fans think he could have.

While there are similarities between the two, one is on a rookie contract and the other is a 108 million dollar man.

For 108 million dollars your QB should be able to handle the holder duties on a game winning field goal.

Since 1979, the Dallas Cowboys have been called "America's Team." The name became even bigger in the '90s, when their squads led by Troy Aikman, Emmitt Smith, and Michael Irvin were about as popular and successful as a team could be.

They have not been to the Super Bowl in nearly 16 years. It was their third title in four years when they beat the Steelers following the 1995 season, but they have won just two playoff games since - wild-card victories in 1996 and 2009. 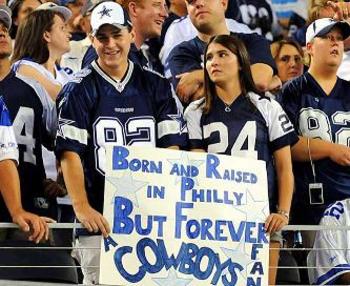 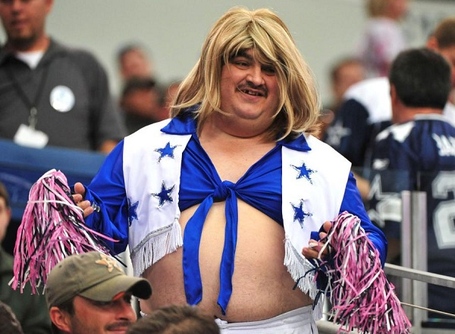 The Cowboys fan base is much like the Pittsburgh Steelers. Most are not from Dallas and many are on the bandwagon to begin with.

But WhoDeyFans, if the Cowboys have sucked for some time now why would these people still be fans?

You see, much of this bandwagon hopping was done when the Cowboys had the Super teams of the Troy Aikman years. The younger fanbase was unfairly pushed into fandom by their bandwagoning parents. Instead of calling them out about it, we should pity them.

Recently they talk about their long suffering. To a Bengals fan we should laugh at the fact that they even try and lump themselves in with us. 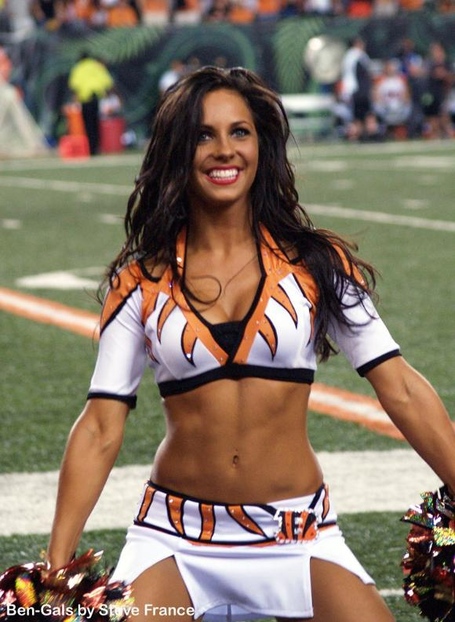 Edge: Come on, one thing the Cowboys do right is the Cheerleaders...

The Dallas Cowboys plan to open a Victoria's Secret "PINK" store at JerryWorld.

If left unchecked, this guy will destroy football. At least all purchases will have to be held in clear plastic bags.