Before the Bengals kick off their first preseason game on Thursday, it's time to take one last look at how the fantasy football community values Bengals players.

The NFL offseason creates some of the greatest speculation in the world of fantasy football. Draft picks are selected, backfields get cloudy, and sometimes players' off-field issues threaten to hamper an otherwise fantasy football lock. Training camp begins the cleansing process. The murky thoughts we tend to develop when we're left to our own devices, as most players hibernate from the public eye, are slowly met with clarity. Training camp allows us to administer the eye test. Training camp allows us to know that players are in shape, working hard, and preparing to own their respective position.

What training camp doesn't always tell us, however, is what a player's hard work will result in; Coaches make those decisions. Preseason escalates the decision-making process for coaches and, in turn, preseason aids fantasy football managers in deciding on who they value more in their fantasy draft.

If you've already drafted your fantasy football team, best of luck to you. I once debated with someone the purpose of drafting after preseason. He believed there is more strategy in drafting before preseason begins. The stakes appear higher in your draft selection, he argued. I personally will never understand it. I compared it to being engaged to marry someone, but allowing your fiancé to date whomever he or she pleases a month before the wedding. But I digress.

Before some of the offseason fog clears with the arrival of preseason, I'd like to review where Bengals players are being drafted in current mock drafts around the country.

First, let's take a look at ADP (Average Draft Position) data charted over the last month, according to Fantasy Football Calculator. Note: This is a standard scoring format. 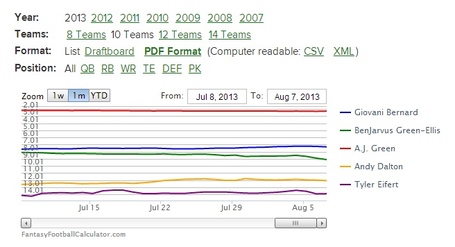 As you can see, the ADP of each player hasn't fluctuated much, even with training camp giving a glimpse into the progress on each respective player. I'd anticipate some changes within the next four weeks but, until then, here is what we know:

A.J. Green - He's being drafted as the fourteenth overall pick on average. In 2012, Green was being drafted as the 26th overall pick on average. Now entering his third season, Green is arguably one of the best receivers available. Anyone who is hoping to grab him in the second round of their draft had better hope to be in the early portion of the second round.

Giovani Bernard - Believe it or not, Bernard is the second Bengals player that managers are taking off the board. Training camp did nothing to escalate his draft stock, but preseason might. In leagues that award points for receptions I can understand the hype surrounding Bernard, but once again this is a standard scoring chart. Averaging as the 64th overall pick, Bernard comes at a higher premium than most when considering other backs that are potentially splitting carries. The question will be whether or not his stock rises or falls in a month. His backfield counterpart isn't far behind him.

BenJarvus Green-Ellis - He's going as the 82nd overall pick in most drafts. In a ten team league, Green-Ellis is being scooped up early in the ninth round. Green-Ellis could prove his value as a touchdown producer this season, but his timeshare with Bernard outside of the red zone is the question. The fact that both Bengals backs are being drafted two rounds apart creates a slight dilemma for those looking to grab both running backs. As I've already mentioned with Bernard, we have four games to determine if their values will begin to deviate further.

Tyler Eifert - With all of the hype surrounding Eifert in camp, I was a bit surprised to see that he didn't have a noticeable climb in his ADP over the past few weeks. Jermaine Gresham is largely going undrafted after being a serviceable fantasy tight end in 2012. Eifert is an interesting lottery ticket you can grab at the end of your draft, but his stock could easily climb into the single-digit rounds if he has a productive preseason. If training camp is any indication, Eifert will climb a bit over the next month. I've already touched upon my feeling on Eifert as a deep option for someone that has already secured their tight end to start the 2013 season. However, I'm curious to see if he makes it difficult for those looking to draft him as a "stash" option. If he climbs too high, he could actually be more than a low-risk flyer.

It will be interesting to see how all of these players rise or fall in fantasy drafts over the next few weeks. Keep in mind that players I didn't list are largely going undrafted at the moment. There could be more Bengals players entering the mix throughout August. I'll also address the Cincinnati Defense in the near future. We'll revisit their fantasy stock as we get closer to September.