We take one final look at "the pass" as we transition from reflection against the Bears to the next game on the schedule.

Share All sharing options for: Wednesday Morning Backup Left Tackle: Gruden Admits He Should Have Run

Let's apply one more swift kick at the dead horse. We're revisiting the end of the first half when the Bengals decided to pass on second down with less than a minute from their own nine-yard line. We pointed out that the play being called was aggressive. Many of you disagreed -- which actually makes my job fun. One reader (who banged the beat of the community's drum) wrote:

How is it aggressive play calling to throw a 1 yard pass on 2nd and 13? If they’d gone down the field, at least it would have made sense.

In this scenario, aggressive is calling a pass. Whether the result of the play was an incomplete pass on a two-yard route, or a 50-yard sling down the sidelines, bad things usually happen when teams (any team) pass with less than a minute on their own nine-yard line. There's no point in passing the football at this stage. Aggressive in this context is acquiring a first down; not a touchdown nor a magical play that satisfies fans with mahogany. Not being aggressive if handing the football off to BenJarvus Green-Ellis and wiping out the clock.

There's also a general assumption that Green was the only option -- considering that Green usually receives 80 percent of Dalton's attention, it's a logical assumption. Yet, Tyler Eifert's route broke towards the sidelines after a 15-yard vertical. Mohamed Sanu was running a deep post. Why not them? 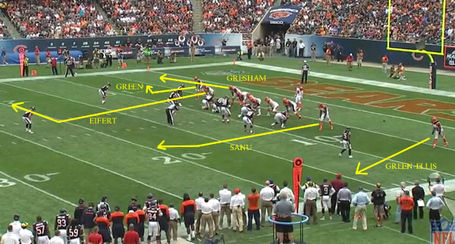 Had Dalton waited momentarily, he'd have seen Sanu with a mismatch over linebacker James Anderson. He'd have also seen that Sanu cleared the linebackers within a couple of steps and the safety focusing on Green's side. Considering there were eight Bear defenders in the box, Sanu's route would have picked up a first... at least.

Cornerback Tim Jennings broke off his assignment with Green-Ellis when Sanu ran a vertical, but he wouldn't have made up the lost ground on a well-placed deep ball.

Blah, blah. That's all pointless hindsight anyway. When you look at Dalton's reaction, two things stand out: he's worried about the pass rush being so close to the endzone (therefore ignoring his reads to the left), and he only had eyes for Green. And maybe the play demanded that Dalton throw to Green (we're not in the huddle, how can we say for certain?) -- and if that's the case, how depressing is that if Dalton's not given the freedom to look at his options?

Gruden at least learned from the experience. During Monday Night's Bengals line on 700 WLW, Gruden was asked by about the call.

"The fact of the matter is if we run it three times, we're still going to have to punt. We’re backed up and punting to Devin Hester and the same thing probably has a good chance of happening, I was trying to get a first down," Gruden said.

Yet, this is why I liked the aggressive call. Disagree with me all you want. That's an aggressive call -- not the result. Gaining the first down ends the first half and there's no attempted 58-yard field goal by Robbie Gould. Not being aggressive still gives the football to Chicago before the end of the half -- hence why Dre Kirkpatrick's personal foul was very untimely (I say that generously).

"I had a simple play call, a play that has about a 95 percent completion rate. Unfortunately one of the 5 percent was in that game. A.J. didn’t run his best route, we didn’t make our best throw and unfortunately it was incomplete," Gruden continued.

"It didn’t work out. Obviously now I would rather run it, run it and punted. Had we done that and then Hester had a good return we would be getting bashed for not trying to throw it. You can never be right in that situation, but the right thing to do in hindsight would be to run it three-times no question."

Of course, you'd be getting bashed, Gruden. That's what we do as fans. Every coach is bashed. Players are completely excused from making their mistakes (like dropped passes that lead to interceptions, or fumbles that led to game-winning drives) all for the sake of dusting off the time management issues. Coaches. Bash. Unless you're Mike Zimmer, because it's not the coordinator's fault when Brandon Marshall has absolute freedom throughout the second half. That must be Rey Maualuga's fault.

"After watching the tape last night and then watching it again a couple times today I felt good about a lot of things," he said via the Cincinnati Enquirer. "I’m excited about our guys. That’s the good thing. I’m excited about this group and what we can accomplish. But we have to do it."

To be honest, I feel the same way today that I've felt since the preseason. I believe that the Bengals have the best roster in the division, that they could win the AFC North and have no excuses for winning at least a playoff game, if not challenging for the AFC Championship. And Lewis is right. They "have to do it."

Gruden was very complimentary of his tight ends, and how could he not be? Jermaine Gresham and Tyler Eifert combined for 82 yards on ten combined receptions. But they were effective in the running game too.

"That was the best part of our day," Gruden said. "I think both of our tight ends played extremely well both in the running game and in the passing game. They blocked well, they ran routes well and they were complimentary of each other so that’s a positive sign and as we go forward that will be a big personnel grouping for us."

Geoff Hobson with Bengals.com writes about the Bengals recent charity efforts from Terence Newman, who joined people for Monday Night Football in support of the Whiz Kids, to Andrew Whitworth and Domata Peko, who are helping kick off another year of Marvin Lewis' Learning is Cool program at Cincinnati's Bond Hill Academy.

"Terence is really passionate about the program," Dooley, senior events planner for the City Gospel Mission, said. "He's seen it in action. He's sat down with some Whiz Kids and spent time with them. He's seen the statistics that show it does work."

Newman also donated signed footballs from some of his illustrious mates, such as A.J. Green and Andy Dalton, as well as a ticket package for the Ravens game and two Paul Brown Stadium tours led by one T. New Also in tow came another Whiz Kids backer, special teams stalwart Cedric Peerman, and the two took questions that had been texted to Dooley.

The Cincinnati Enquirer has pictures of the Learning is Cool event from Tuesday.