One of my favorite aspects of being a huge sports fan is the smack talk that accompanies the game. This week I let you know my top 10 reasons to hate The Steelers and hopefully fuel your fire to root for the Bengals that much harder on Monday night.

I ruffled some feathers last week with the 10 reasons to hate Chicago. I get it, you are a sensitive bunch. This week I will focus more on the team that Bengals fans love to hate. (Or is it hate to hate). The Pittsburgh Steelers.

The video speaks for itself. Especially annoying is the way the chin goes into a small seizure at the end. Act like you've been there is what we as Bengal fans often hear...

The Steeler fan loves to remind you about the amount of rings the Steelers have. Of the 6 championships, 4 were in the 1970's. Interestingly, this is around the same time that steroids became a dominant theme in the NFL. Jim Haslett admitted to experimenting with steroids as a Buffalo linebacker, and has said the use of those drugs among NFL players started with the Steelers.

Steeler center Mike Webster admitted using steroids. So, did tackle Steve Furness and guard Steve Courson. Do you realize that the Steelers did not win a playoff game until 1972? That is kind of ironic, considering they were founded in 1933. Steelers of the 70's openly admit to juicing and the dominance soon followed.

The population of Pittsburgh mashes, creates and butchers words all while celebrating it as culture. Pittsburghese is an accent or dialect that people in Pittsburgh speak. Instead of staying "downtown" they say "dahntahn" instead of "You Guys" its "Yinz". Then they make fun of the Bengals saying Who Dey.

Myron Cope contributed to this with sayings like "double yoi". You couldn't understand him, and he was so biased he polluted radio stations with Steeler nonsense. When presented with the Pete Rozelle Radio-Television Award at the Pro Football Hall of Fame, he was given two minutes to speak. Cope rambled for 13 minutes and was eventually escorted back to his seat before he could finish. He apologized for causing a stink, saying it was conceit. "People may think I'm senile, but I ain't. I thought I was a celebrity,"

Myron Cope was also responsible for the Terrible Towel. This annoying yellow piece of laundry makes its way to anywhere the colors black and gold may touch. It is an instant sign that you are surrounded by fans that probably don't understand anything more than waving some fabric. You see it on television at everything related to the NFL.

The only redeeming quality of the towel is that the proceeds are sent to charity.

Ben's sense of entitlement is disgusting. There are numerous stories of how big of an a-hole this guy is. This week I was talking with a Steeler fan about the game and he could not wait to ask me about Pac Man Jones hitting a woman. I then reminded him about his quarterback. I also mentioned these lesser known acts about Ben (pulled from Sports Illustrated)

A pregnant T.G.I. Friday's waitress tells Sports Illustrated that Roethlisberger directed numerous inappropriate comments at her while she was working earlier in 2010. She claims that the Steeler asked her, "Did your boyfriend forget to pull out?"

Remember the motorcycle crash? After Kellen Winslow Jr. had his issues with his motorcycle, people approached Ben about him riding. In the interview (which aired on ESPN) he talked about having his motorcycle license for some time, and about how he only rides a Harley and never rides the sport bikes. He talked about only riding in groups and being safe, then the moron wrecks a high performance sports bike with no license and no helmet.

"If I ever ride again," he said afterward, "it certainly will be with a helmet."

A few months after the accident, a reporter and a cameraman for KDKA-TV, the CBS affiliate that broadcasts Steelers games, were driving on I-376 in Pittsburgh when they saw two men on motorcycles and recognized one as Roethlisberger, who was not wearing a helmet. They began shooting footage, which showed Roethlisberger giving them the finger as he sped away, but the video never aired.

Why is Carson on this list? It may be sad but as Bengals fans we still remember "The Hit" in the 2005 playoff game. Sure, it was not on purpose, but that doesn't mean it still does not sting.

The fans of the NFL had to endure the 8-8 Pittsburgh Steelers 5 times in prime time last season. The Steelers fan will tell you how the media hates them. Or Rodger Goodell has it out for them, but the facts don't lie. We are force fed the black and gold product and I don't like it. 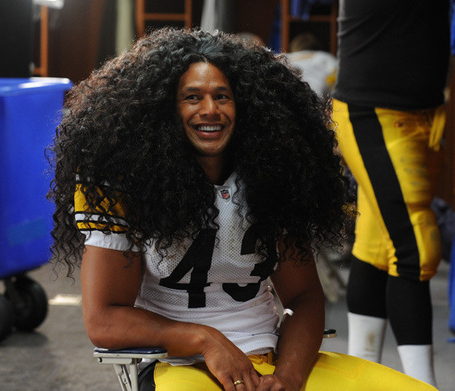 Good safety, game changer, wreck-less abandon blah, blah, blah... In my eyes Troy Polamalu is an upside down mop. Others see him this way also. In fact at one point Troy had his hair insured by Lloyds of London for one million dollars. The most valuable single asset this guy brought to the table was his hair.

I will admit it is pretty hair. So pretty in fact, the Steelers organization has internal rules about not leaving Ben Roethlisberger alone with Troy's locks. 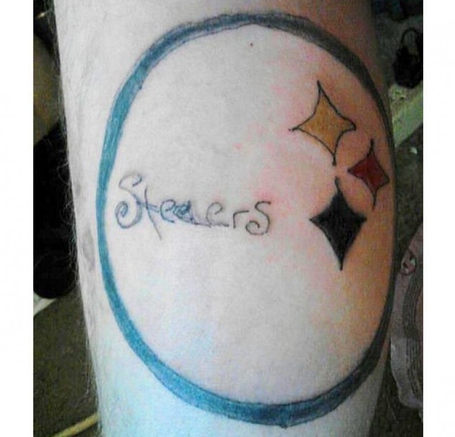 They are everywhere. They claim to travel well but in reality they are a product of bandwagon hopping. Sure, you hear some loose connection they have why their fandom makes sense, but in actuality they were brought there by the wagon. It is easy to root for a team that consistently wins. These people are a product of the 70's. Maybe they tell you it's because their dad, or grandpa was a fan they root for the Steelers. Well, I hate to break it to you, that's probably because they jumped on the bandwagon too.

It's ok, we don't hate you for it, we hate the fact you show up at our stadium with very little football knowledge. You are not really sure what you are cheering for but you are armed with a .2 BAC and a yellow towel (see above). Man you can be annoying.

Next NFL game you watch (aside from the Bengals - Steelers of course) pay attention to the stands. This Thursday the Eagles play the Chiefs. Chances are good when the camera pans the stadium you will spot a Steeler jersey. If you are really lucky, that moron will be waiving his towel. 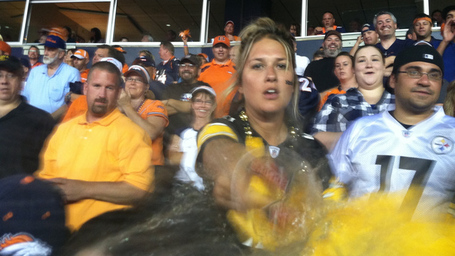 I don't care about 6 burgh or your stairway to 7. I hate that no place on the Internet is safe from you. I could write an article about space exploration on a blog about NASA and inevitably, one comment will contain "Bungles stink - Stillers rule".

I briefly wrote for another blog where each week we would nominate someone as the douche bag of the week. We grabbed the worst people anywhere from the guys responsible for the economy collapse to people that have hurt kids. On an off week we chose Big Ben as the weekly candidate and we got 20 times more comments on that article than any other. Steeler fans scour the net to defend their beloved QB. The guy makes the dumbest decisions in life and you all celebrate him for it at the same time berating Bengals fans for the player arrests.

That being said, this is a rivalry game. That alone should fuel the fire for the black and orange. Tonight is the night the Bengals can make a statement.