Having a free Sunday to check out the NFL landscape was nice. A few observations and notes from the second week of the NFL season.

There's just something to having a Sunday all to ourselves to freely roam the NFL landscape. Whether it's regional games that the networks force honor you to watch, or the Red Zone network's excellent coverage, as fans without a home on Sunday, we were given an opportunity to sit back to watch the beauty of the NFL unfold. And if there was a weekend for the Cincinnati Bengals to play on Monday Night Football, this was it.

With 13:01 remaining in the fourth quarter, Buccaneers linebacker Mason Foster returned an interception 85 yards for a touchdown, giving Tampa Bay a 14-13 lead. Both teams exchanged punts and then Tampa Bay went on a 12-play drive that consumed 5:50 off the clock. With the Buccaneers unable to extend the lead to four points after Rian Lindell pushed a 47-yard field goal wide left, Drew Brees and the Saints offense took over at their own 37-yard line with 1:06 remaining. In three plays and one spiked football, Garrett Hartley converts the game-winning 27-yard field goal as time expires. Saints win 16-14 in a game that Brees threw two interceptions, one returned for a touchdown, while being sacked four times.

The Carolina Panthers have fourth and one at the the Bills 21-yard line when Graham Gano converts the 39-yard field goal to give Carolina a six-point lead with 1:42 remaining in the game. Bills rookie quarterback E.J. Manuel completes seven of nine passes (an interception was overturned on a defensive pass interference) on the ensuing drive, scoring the game-winning touchdown to Stevie Johnson with :06 remaining -- thanks to confusion by the Panthers defense.

"I have pretty much got a corner route on that play," said Johnson via Bills.com. "The defender was yelling check the corner to the outside guy, but with Chris Hogan in there you’ve got to respect him. When he comes underneath you better jump on ‘7-Eleven’ and they just left me wide open. It was a play where we took advantage of their miscommunication."

The Buffalo Bills took their first lead of the game against the Carolina Panthers with only six seconds remaining in the fourth quarter. Let's go ahead and blame the Carolina Panthers play-calling, who had the ball at their own 47-yard line with 4:20 remaining in the game, calling seven straight runs, forcing the Bills to extinguish their timeouts and milking the clock as much as possible. It's a safe philosophy that empowers geniuses of hindsight.

"The thought process was kick the field goal, go up by six and make them go the length (of the field)," Rivera said unable to sit in his hot seat. "Unfortunately it worked out for them."

But we're not going to sit on our soap box with a self-righteous and high-minded perspective that we could do other people's jobs better than them. For the love of god, NFL, stop phoning it in, man.

Bears quarterback Jay Cutler hit tight end Martelleus Bennett on a 16-yard touchdown pass with :16 remaining in the game to take a 31-30 lead over the Minnesota Vikings. Upback John Carlson lost the football on Robbie Gould's swib kick and the Bears win. It wasn't a game that they should have won, increasing the count on that statistic to two. But they did.

"It's hard to be minus-two in turnovers and [allow] a kick return for a touchdown and win a game," said coach Marc Trestman. "That says a lot about our players and their resiliency throughout the game, just moving on to the next play and doing the things they had to do to play an entire football game, 58 plus two minutes. It's tough to win and we appreciate the win."

With the game tied at 30, Philip Rivers pushed San Diego over 50 yards on nine plays against Philadelphia's defense, putting Nick Novak in position for the game winning 46-yard field goal with :11 remaining, in a game that nearly featured 900 passing yards.

But it wasn't all offenses that were winning games within the final minute.

Down by four points with 1:35 remaining in the game, the Indianapolis Colts have fourth down from the Dolphins 23-yard line. Miami linebacker Phillip Wheeler sacked Andrew Luck for a five-yard loss, turning the ball over on downs. Running back Lamar Miller picked up ten yards on three carries, securing Miami's 24-20 win. Even punters got into the act when Chiefs punter Dustin Colquitt dropped a punt on Dallas' four-yard line with :16 seconds remaining while leading 17-16. Tony Romo went conservative with a 10-yard pass and the game was over.

But the bat-shit crazy award for a finish may go to the Houston Texans, who scored the game-tying touchdown on an Arian Foster one-yard run with 1:56 remaining in the game. After a quick three-and-out by the Titans, Houston pushed down field to Tennessee's 33-yard line. Randy Bullock kicked the game-winning field goal... if Titans head coach Mike Munchak hadn't called a timeout to ice him. Bullock's second attempt was blocked, but the Titans were called for an offsides. Bullock's third kick sailed wide left, but Munchak's timeout was honored prior to the kick to ice him again. And the fourth attempt missed after bouncing off the upright. Houston went on a 11-play drive, capping a 78-yard overtime possession with a three-yard DeAndre Hopkins touchdown reception. Game over. 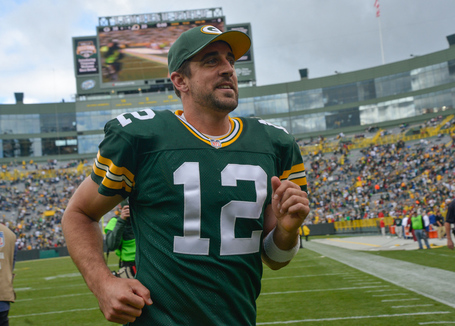 Three quarterbacks passed for 400 yards while avoiding the interception category on Sunday; the most in NFL history for a single week. Aaron Rodgers generated 480 yards passing and four touchdowns in Green Bay's 38-20 win over the Redskins. And the photo bombing strategist wasn't feeling well.

"I didn’t feel great before the game," Rodgers said after the game. "My neck was sore and stiff. I was hurting pretty bad."

Philip Rivers posted 419 yards and three touchdowns in San Diego's 33-30 win over the Eagles, with Michael Vick adding 419 yards and in the same game.

There have been five performances where the quarterback records 400 yards passing and no interceptions this season, one off the record for an entire season ('10, '12). And there's one game remaining this week -- along with 15 more weeks and 14 more games. Yet the six individual 400-yard passing performances (including those with interceptions) this year is the most during any two-week span in NFL history.

PEYTON IMPROVES TO 3-0 IN MANNING BOWL 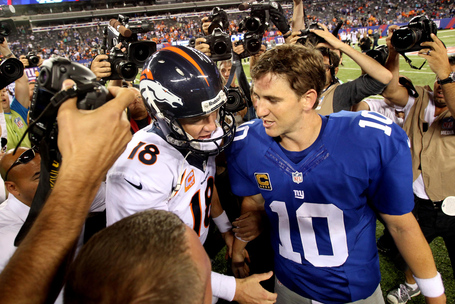 Denver Broncos quarterback Peyton Manning passed for 307 yards and two touchdowns during Denver's 41-23 win over the New York Giants. Manning becomes the third quarterback in NFL history to reach 60,000 yards passing, in only his 226th game (fastest to reach that milestone). Brett Favre and Hall of Fame quarterback Dan Marino are the only other 60,000 yard passers in NFL history.

Yet Peyton didn't enjoy beating his little brother as much as he would other teams.

"It’s a strange feeling," Manning said. "It’s not like beating another team. It’s not probably quite as enjoyable as it would be if you had beaten somebody else. Surly it was a good team win. Coach Fox put a lot of emphasis on being a good road team. We didn’t start out well on the road last season, so to come in here and beat a good football team on the road, hopefully we can build off of that." 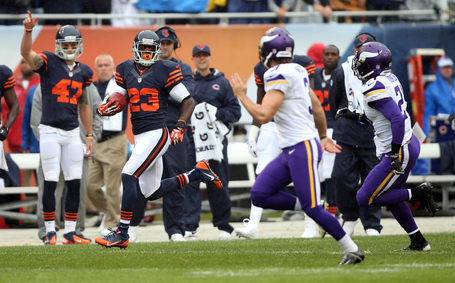 Minnesota Vikings rookie receiver Cordarrelle Patterson returned the game-opening kickoff 105 yards for a touchdown against the Chicago Bears. It ties Percy Harvin (Sept. 30, 2012) for the longest return in franchise history and the fourth-longest by a rookie in league history. Green Bay Packers receiver Randall Cobb holds that record with an 108-yard return on Sept. 8, 2011.

But like the Bears scoring a game-winning touchdown with seconds remaining to secure a 31-30 win, Chicago one-upped the Vikings return game in a way. Devin Hester returned five kickoffs for a franchise-best 249 yards, third-most in NFL history for a player with five returns or less. Who has the most? Walley Triplett generated 294 yards on four kick returns on October 29, 1950.

But it was the rookie's kickoff return that really motivated Hester.

"Before the kickoff, I just said, 'I don't care how deep this guy kicks it, I am bringing it out,'" Hester said via the Chicago Tribune. "And that's the mentality I told my (special teams teammates) about. If you get punched in the mouth like that, we're not going to just fold down and back down. If you kick it 9 (yards) deep, we're coming out. So don't expect me to take a knee."

ALL ABOUT THE DEFENSE 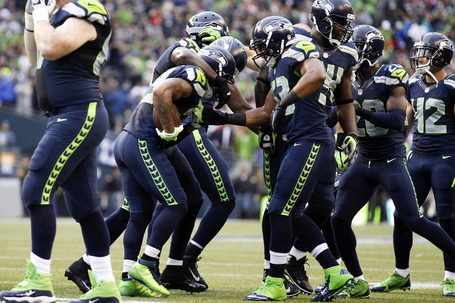 Boy, did Colin Kaepernick look ordinary. Let me re-phrase that. Boy, did Seattle make Colin Kaepernick look ordinary during a highly anticipated (and storm-filled) Sunday Night Football match-up between two NFC West powerhouses. Maybe it's unfair to hype the third-year quarterback after only concluding his ninth start in his regular season career. But we know that the spotlight doesn't affect him as much, being as that he led San Francisco through the playoffs and into the Super Bowl.

The excellent Seattle Seahawks defense beautifully turned Kaepernick into a mediocre quarterback, limiting the quarterback to only 13 completions, three interceptions and a passer rating of 20.1. And this isn't the first time that Seattle has had San Francisco's number. During a week 15 meeting between the two teams, Seattle beat the 49ers 42-13 with an ordinary performance by Kaepernick.

"We're not going to win games if I play like that," Kaepernick said after the game. "You have to try and make plays and this time, I forced them."

Russell Wilson wasn't a beacon of legendary quarterback play either. Of his 19 attempted passes, Russell Wilson only completed eight while being sacked four times and throwing an interception.

It was the running game that sealed Seattle's 29-3 win with Marshawn Lynch leading the way with 98 yards rushing and two touchdowns. As a team, the Seahawks powered through the respectable 49ers defense for 172 yards on the ground.

But it comes back to Seattle's defense.

"We did everything we needed to do on defense," said Seahawks coach Pete Carroll. "We had a great night on defense."

Seattle held San Francisco to only 207 yards of total offense, limiting San Francisco to three of 12 on third down opportunities while scoring a first quarter safety to give Seattle an early 2-0 lead. Three fours of the Legion of Doom (Brandon Browner was out with a hamstring), recorded interceptions.

"I don’t think any of us are proud of our performance tonight," Jim Harbaugh said after the game.