Anthony Collins on shutting down Julius Peppers: "I'm a grown man too"

Cincinnati Bengals backup offensive tackle Anthony Collins stood in for Andrew Whitworth. And the Chicago PD still has an all points bulletin looking for Peppers at this hour.

Share All sharing options for: Anthony Collins on shutting down Julius Peppers: "I'm a grown man too"

When Andrew Whitworth's knee wasn't responding as much as the team had hoped, there wasn't the panic that you'd usually associate with a Pro Bowl starting left tackle sitting during the regular season opener in Chicago. In fact, it was calm. Very calm.

We've known Collins for a long-time. He's the steady type of player that may not be the starter, but when he enters the game, sometimes you don't even notice. Production happens. Players he's assigned are blocked and he handles business generating no concern regarding the position that he's substituting for.

Simply put: The Bengals have one of the league's best backup tackles on their roster. Anthony Collins proved that on Sunday when stood up and said, "I've got this." And the thing is, everyone knew that he would.

When it was over, Julius Peppers, the Chicago Bears right defensive end with 111.5 career quarterback sacks that Collins was assigned, didn't just fail to generate a pass rush. Peppers never showed up on the stat sheet. No quarterback sacks, hurries, rushes, not even an assisted tackle.

"He's a man. A $100 million man, but I'm a grown man, too," Collins said with the steely voice that comes with being a man that could be characterized in an Old Spice commercial. 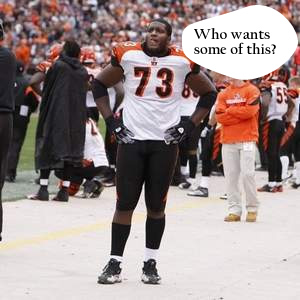 Collins might be asked to make his second start of the season against the Pittsburgh Steelers next Monday if Andrew Whitworth isn't ready yet. With Collins, the Bengals have the luxury of allowing Whitworth to sit until he's absolutely ready for his season debut.