Arguing both sides of the Marvin Lewis debate

Marvin Lewis is shouldering a lot of heat from Bengals fans and the media for having no playoff wins in 11 seasons. It's both fair and unfair.

Share All sharing options for: Arguing both sides of the Marvin Lewis debate

[NOTE: This post was largely inspired by this FanPost that was waging the debate where both sides made logical arguments for and against Lewis. Thanks to everyone for the conversation; sometimes I forget how much I enjoy the back-and-forth... even if I am a little snarky sometimes (out of total love)]

Last week the Cincinnati Bengals promoted Hue Jackson to replace Jay Gruden, who left for the top job in Washington. On Wednesday, the team tabbed Paul Guenther as Mike Zimmer's replacement in the biggest shoes plopping around Cincinnati's ice-mixed snow. Cincinnati still needs a linebackers coach and assistant defensive backs coach, and those will happen, but "coaches week" is coming to a merciful end.

Stop ignoring the fact that the Bengals are winless in five straight postseason games during Lewis' tenure. It's a significant, if not an passionate rallying cry for those that demand change.

MARVIN LEWIS SHOULD BE FIRED!

No one cares about the journey. Not anymore. If the Bengals win nine, 10 or 11 games, it doesn't matter. All that matters is the postseason record that's dripping with futility. One day out of 365 is more important than the preceding four months. Save for qualifying for the playoffs, the regular season is pointless if there's no victories in the postseason. How else can you explain labeling 2013 a failure, despite winning 11 games?

This is why we are here.

This is why he should be gone.

Lewis, who white-knuckled both hands around the rope that anchored Cincinnati's leaky boat, was the head coach when the Bengals needed him. Rebuild. Not once, but twice. Modernize the team. Wipe out a culture in which a regular season win felt like a Super Bowl. Lewis arrived when he was most needed.

Cincinnati had won two games in '02. It was the lowest of lows. Considering how bad the Bengals were in the 90's, that's saying something.

In 11 seasons, Lewis made the Bengals respectable -- an annual threat that can win any game. How many coaches in franchise history can claim that they've taken their team to the postseason in three straight seasons? None. Not the lovable Sam Wyche, who's in-game "we're not in Cleveland" speech will go down as one of the most memorable events in franchise history. Not Forrest Gregg, who took Cincinnati to their first Super Bowl and certainly not Paul Brown, who is the father of this organization (and modern football).

Lewis repaired the leaks that were sinking the franchise. Many will latch onto this perspective as a point to keep him. Others will honor his work and support his service, but cite Tony Dungy and Jon Gruden as examples on how an established team that struggled in the postseason, finally navigated the impassible foothill. If it happened there, why not here?

Everything is in place. The future is stable and the front office culture has changed just enough to limit justified concerns regarding any coaching changes. They just need someone to nudge Cincinnati just a little further with a playoff win, if not a championship.

You need a new voice to motivate the masses and the locker room.

Firing Lewis is not unlike Congress over-reacting because change is change -- despite the blind prognostication on how making change impacts the future. Emotional decisions often forfeits the challenge of foresight. It's a gamble.

In reality, it's simple.

What did Lewis not do two weeks ago when the Bengals were bounced after the first round? Run out on the field and recover Andy Dalton's fumble? Slap Jay Gruden around for not doing a better job of developing plays, or not putting the mad scientist in a corner for a time out, because he often over-complicated simplistic situations. It's third and one. Slap, slap. "Oh, you said run BenJarvus Green-Ellis between the tackles, not outside of them!"

What specifically could Lewis have done differently against the San Diego Chargers?

San Diego strung together an 80-yard touchdown drive that gave San Diego the lead early in the third. The Bengals defense kept the team in the game sure, but let's not act as if the defense has been great either; after all, we're talking about a stout Mike Zimmer defense that's allowed 178.3 yards rushing per game in his four postseason appearances since 2009. Should Lewis have taken over the play-calling?

But the defense wasn't really the problem, was it?

Son. You can't fumble in the second half of a playoff game. But Dalton had a ton of pressure. 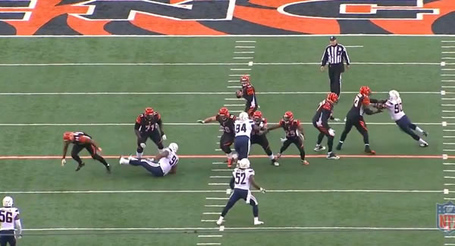 He was right to take off, though. 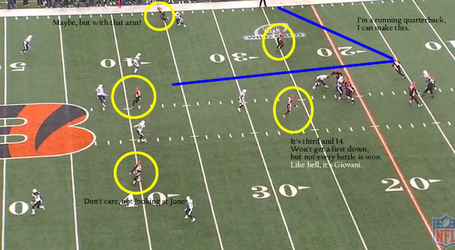 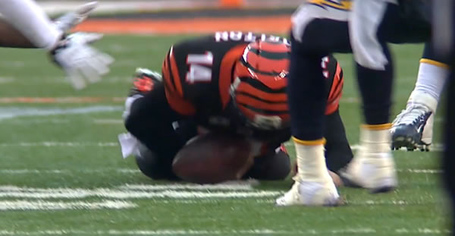 San Diego picked up a field goal to extend their least 17-10. On the ensuing possession, the Bengals have third and eight from their own 26-yard line with 1:19 remaining in the third. Dalton faced immediate pressure, largely due to miscommunication on the offensive line.

God bless Dalton for trying to win on a play that was already lost. With a significant interior pass rush, Dalton was forced to make a power throw off his back foot. It was a disaster, no matter where he targeted. It's one of the few times that you just say, take the sack. Live another day. If you just hate Dalton, then blame him with the pointed question, "why didn't you read this, and adjust with a hot route?"

San Diego kicked another field goal after Shareece Wright's interception, extending their lead 20-10. On the next possession, the Bengals have first and ten from the Chargers 35-yard line with 10:33 remaining in the fourth. Prior to that, Cincinnati pushed the football from their own 11. So they were moving.

This time it wasn't a pass rush. It wasn't a cute zone blitz (the Chargers rushed three) nor disguise. It was quite literally the worst throw at the worst time. 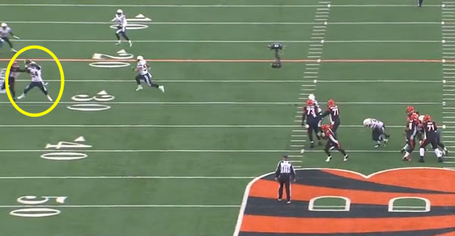 Not only was the pass well behind Tyler Eifert, Dalton never looked off of his intended target.

Don't blame Dalton!! This isn't about him! In truth, I'm not --turning it over on three consecutive possessions in the second half of a playoff game is totally acceptable.

My point is wondering where did Marvin Lewis fail during Cincinnati's opening four offensive possessions in the second half -- the first being a four-and-out (they picked up a first down but punted after) that we didn't highlight.

No. I'll just blame everyone. It's fair. Isn't it?

Yet it was this game that's causing the outpour for Lewis' dismissal.

Plus the other four losses. The same losses when the defense couldn't hold their water against the New York Jets rushing offense, while allowing 12 of 15 passing by Mark fuggin' Sanchez? Or the loss in '05 when Carson Palmer and Chris Henry suffered game-ending injuries on the second play from scrimmage?

If you're going to blame Lewis, then don't stop there.

MARVIN LEWIS SHOULD BE GIVEN AN EXTENSION

Both sides of this debate has been created from two differing perspectives.

Those that say fire Lewis, are applying a philosophical trigger. And they're right. No matter how the games were lost, they were lost. And Lewis remains the constant -- and Robert Geathers (hummm).

Those that say Lewis isn't the problem, are re-distributing that blame to others. And they're right too. Lewis can only do so much if his players aren't executing. That's as much on them as anyone.