Former Bengals defensive coordinator Mike Zimmer was introduced to the media on Friday as the Minnesota Vikings newest head coach.

Share All sharing options for: Mike Zimmer introduced as the Vikings head coach

Generally speaking, we hope that he does well. Will Zimmer become a serviceable head coach that will turn the Minnesota Vikings around? Or will he become this generation's version of Dick LeBeau, who has a great defensive mind but lacks the intangibles to becoming a head coach. Obviously, anyone that answers that should probably fight through White Death for a few lottery tickets. As our offseason unfolds, attention on Zimmer and the Vikings will significantly decline as we close internally on all things Bengals.

In the meantime, Zimmer was introduced to the media as Minnesota's newest head coach on Friday. What's he looking for? 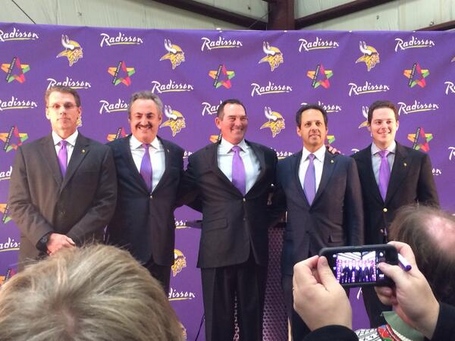 "I want Vikings football to be tough, smart … and works relentlessly for one goal," Zimmer said sporting a tie that represented his team's colors. "I want our fans to be proud of the way we play — tough, resilient football. We don’t win alone, we win as a team. I’m determined to bring a championship to Minnesota. And I can’t wait to get to work.

"I want to win a Super Bowl. I want to be standing at the podium with [owners] Mark and Zygi Wilf when that confetti is falling down and Commissioner Goodell is handing us that Super Bowl trophy."

At least he has head coaches introduction 101 down.

Roughly 11 years and three days ago, the Bengals introduced Marvin Lewis as their newest head coach. 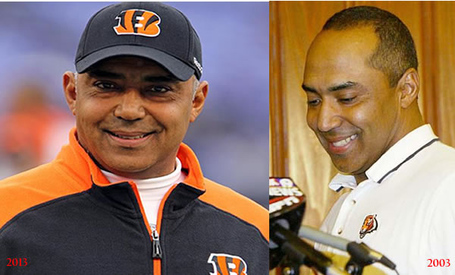 "Before you win, you have to learn how to win," said Lewis when he was hired 4,021 days ago. "You have to learn how not to lose. We're going to set a standard for how it's going to be. People would say I'm a disciplinarian. There is a right way to do things, but you can't coach 53 guys the same way."

Lewis knew what he was about to step into, trying to erase a period of Bengals football with Dave Shula, Bruce Coslet and Dick Lebeau as their previous head coaches. Before he could even promise success, the Bengals needed to change their culture.

Zimmer's task isn't as arduous. The Vikings qualified for the postseason two years ago and three out of the past six years. Lewis, who needed a chisel and hammer to clear out an infestation that lasted over ten years, largely turned over the roster by removing individual elements with team-oriented veterans. And when those individual elements returned, he did it again three years ago.

While Lewis has largely accomplished his goal of giving the Bengals respectability, the biggest question for Zimmer entering the offseason is who will be his quarterback.

"We’ll try to do our best to have the best quarterback in the division," said Zimmer. "But my job is to win football games, it’s not to worry about if the QB is fourth best or first best in the division."