Despite stringing together fantastic single-game performances in three seasons with the Bengals, Dalton's young (and streaky) career is being defined in the postseason. In three career playoff games, he's thrown six interceptions, lost a fumble and only thrown one touchdown. And the turnover trends aren't exclusive to the playoffs either. In 2011, he turned it over 18 times (16 picks, two lost fumbles). That number increased to 21 (17 picks, four lost fumbles) in 2012 and 26 (22 picks, four lost fumbles) last season.

Cincinnati had their best opportunity to claim the elusive postseason win earlier this month against the San Diego Chargers. Three second half turnovers by Dalton, on three consecutive possessions, led to an eventual 17-point loss at home. Is it all on him? No. But for all those questioning about the team's status quo in regards to Marvin Lewis, Dalton must be placed under the same microscope.

The much-maligned fourth-year quarterback will enter the final year of his four-year rookie contract in '14. There is the belief that Cincinnati will try to extend Dalton beyond 2014, but we're curious to see if there's any confrontation on the issue. Bengals owner Mike Brown has stated previously that he preferred Colin Kaepernick and Ryan Mallett over Dalton (that story here). However, Jay Gruden argued that Dalton was more NFL ready and he was right. Gruden isn't here. Mike Brown is still Mike Brown and he'll change things up if he so chooses.

There's a lot to be said about Dalton's accomplishments in Cincinnati. He's one of four quarterbacks in NFL history to reach the postseason in each of his first three seasons -- not that Mike Zimmer's defense had anything to do with that. Dalton also joins Dan Marino and Peyton Manning as the only players to throw for 80 touchdowns or more in that same time frame.

It's doubtful that the Bengals will make a change at starting quarterback in '14. Yet we'd be a little surprised if the team didn't place Dalton on the proverbial hot seat, forcing him to earn his second contract with better protection of the football, a little more mental toughness, and a postseason victory. 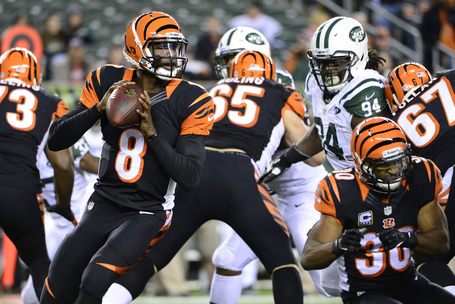 The preseason darling was exciting last year with impressive escapability and refreshing arm strength -- even if his accuracy tended to be a little sporadic. At the end of the preseason last season, Johnson completed 55.1 percent of his passes, scoring three touchdowns while throwing one interception on 49 passing attempts.

Unless Dalton suffers a major injury, Johnson won't replace him as the starter. Sorry. He's not going to. We're talking about a quarterback that played well against non-starting level defensive players in the preseason. Johnson has never been a starter in the NFL (he's started games, but as a replacement) and after his four-year contract expired in Tampa Bay after '11, no one wanted him. No one. It wasn't until the Cleveland Browns lost their roster of quarterbacks by the regular season finale in '12 that Johnson eventually returned to the NFL.

Of course, that's just a matter of opportunity. He hasn't had an opportunity to prove that he can start in the NFL. But as previously mentioned, unless Dalton suffers an injury, that opportunity won't happen in Cincinnati. 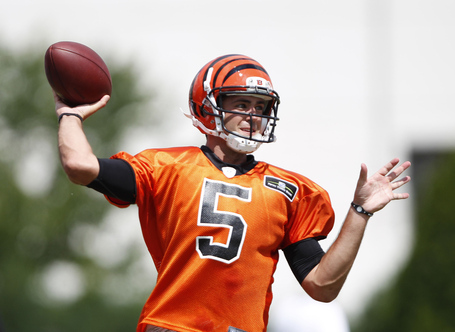 Robinson has been a mainstay on Cincinnati's practice squad for two years. Last year he landed on the team's PUP list and wasn't removed, ending his season with an elbow injury. If the football gods are fair, they'll allow Robinson to compete for the backup job against Johnson. It's unfortunate that the football gods aren't fair.

At this point in the offseason, it's hard to tell how everything will play out. We'll examine a few possibilities.

Josh Johnson is cut: Let's face facts. Josh Johnson was a Jay Gruden quarterback. Now that Gruden has left for the Washington Redskins, Johnson lost his greatest supporter. Instead of relying on that relationship to make the team (he earned it last year), Johnson will have to play out of his mind to remain on Cincinnati's roster. Unless free agency and the NFL draft doesn't offer reliable alternatives, of course.

Free Agency: Once the first few rounds of free agency clears out (2-3 weeks after it starts), we wouldn't be surprised if the Bengals added a veteran backup quarterback. I don't think Josh McCown is on the radar -- he just decided that he wasn't planning to retire and the Bengals aren't the most quarterback-needy team in the NFL (aka, they won't overpay for someone). However, don't expect much out there anyway (they're usually free agents for a reason). Michael Vick leads this year's free agent group with Chad Henne, Rex Grossman, Matt Flynn and Josh Freeman.

NFL Draft: Possible. Quite possible. At best, the Bengals draft a quarterback in the third round -- at best. A scenario much more likely is that Cincinnati will draft someone on Saturday, May 10 (rounds 4-7) to compete for the backup job against Johnson and/or a veteran free agent acquisition. The question that will go unanswered (for now) is: Is that drafted quarterback good enough to replace Dalton if the team elects not to re-sign him after 2014?