When the Bengals were faced with third down scenarios needing one yard or less to convert, it was a foregone conclusion that if Green-Ellis' number was called, Cincinnati would convert. He did it 14 times on 15 opportunities in 2012. No one in the NFL was more productive.

Unfortunately, Green-Ellis didn't offer the same rate of success in 2013, converting only seven of 11 third-and-one situations. Additionally, two of those failed conversions led to fumbles -- including one returned for a touchdown. If we include situations on fourth and one, Green-Ellis converted only one of three -- and the one was the questionable touchdown against the Colts.

Though he had his moments, it wasn't exactly a season that will make his compilation of best seasons in his career. Green-Ellis posted only 756 yards rushing and a career-low 3.4 yard/rush average. For the second consecutive year, he lost two fumbles (both on third down conversion attempts). Maybe it was play-calling (bending Green-Ellis around the edge), the scheme (poor blocking assignments) or failure to generate rhythm. Either way, for a running back that earned $2.3 million, he didn't really offer a return in Cincinnati's investment. 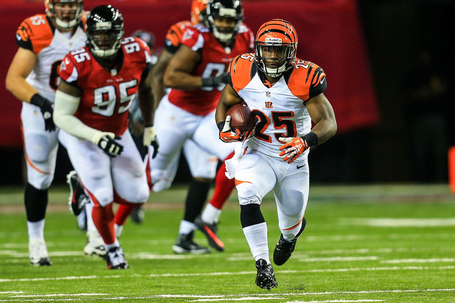 The Ninja, our little Ninja, the master of the space/time continuum, rookie running back Giovani Bernard made an enhanced argument that he, not A.J. Green, could be the greatest offensive weapon in Cincinnati's arsenal. A threat from the backfield, out of the backfield, down the sidelines, in the flats, or over the middle, Giovani can suspend disbelief like an episode of Lost to cash-in from improbable situations.

And with Hue Jackson taking over play-calling responsibilities, his rookie season could be fractionally reduced to what his overall production will become. Generating 1,209 yards from scrimmage with eight touchdowns is nothing to snort at; but his successes and growth feature one of the biggest positive trends on Cincinnati's roster.

However, there were some flaws -- many will categorize as a rookie being a rookie. He lost two fumbles, including one in the playoffs inside San Diego's four-yard line that should have led to a score. Bernard also ran the football on third/fourth down, with one yard or less needed for conversion, six times, converting only two. That failure we'll tab as questionable personnel packages in identifiable situations from the mad scientist, Jay Gruden. 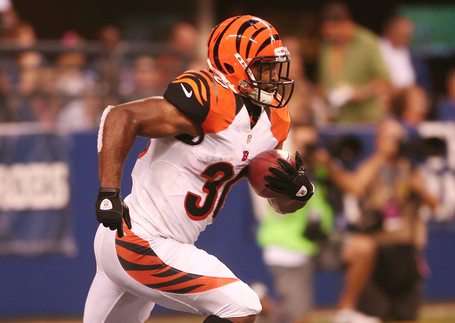 A special teams ace, Peerman finished fourth on the team with 10 tackles, along with a recovery on a Brandon Tate fumble. Wasn't utilized much on offense in 2013, posting 17 yards rushing on eight carries with six coming against the New York Jets. Played 33 total snaps on offense with a positive pass blocking score. Currently signed through 2014 with a $1.05 million cap number if you factor in his $50,000 workout bonus later this spring.

His special teams reputation warrants his worth. It'll be interesting how the Bengals utilize Peerman on offense this season with Hue Jackson declaring a physical offense with more effective run packages. I'm not quick to declare Peerman safe in '14, despite his special teams effectiveness. But someone will have to bounce him out. 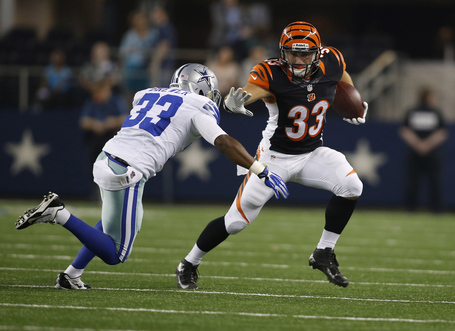 Inactive for 15 games this year, Burkhead made his NFL debut against the Baltimore Ravens on Nov. 10. All special teams. Ran for 130 yards rushing on 28 carries with a touchdown during the preseason with five receptions.

While most of us like Burkhead, he's in a position of being expendable on a team that looks to re-establish themselves as a physical entity and an improved running game.

Does that mean that he's gone? Of course not. Does that mean he will be fighting every day from now until early September for his job? Absolutely.