Attending the NFLPA Collegiate Bowl as a member of the press

Thanks to the NFLPA, we were offered full press credentials to the NFLPA Collegiate Bowl last weekend. It was my first experience behind the scenes as a member of the press and I thought I would share the day with you.

Share All sharing options for: Attending the NFLPA Collegiate Bowl as a member of the press

Thanks to the NFLPA for granting press access to the Collegiate Bowl last weekend, Cincy Jungle was given an opportunity to, not only scout players at practice and during the game, but a chance to attend an event as a member of the press.

Arriving at the StubHub Center in Carson, California on Thursday, I wasn't sure what to expect. I have been to a ton of NFL events, but never in this capacity. After finding the Will Call gate to pick up my credentials, the window attendant asked if I was a scout. No. "Agent," he asked. Nope. Eventually he found my name in the media batch and handed me my pass. 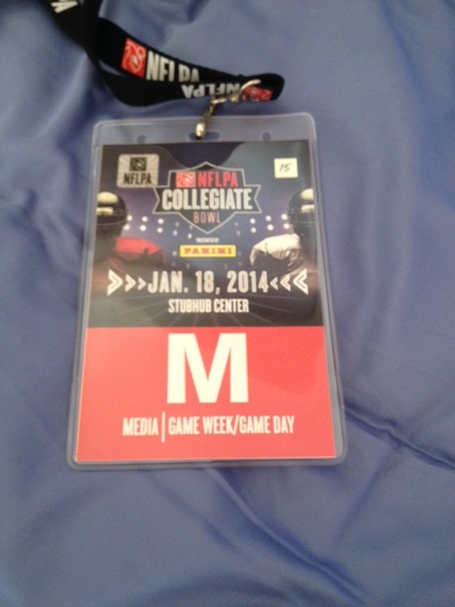 After heading into the facility to watch the American Team practice, I met with Anthony Cosenza. We sat in the front row taking notes and posting tweets with pictures. Believing that this would be as close as we'd get to practice, a member with the NFLPA, who was following our feed on Twitter, came and asked if we wanted to be on the field. 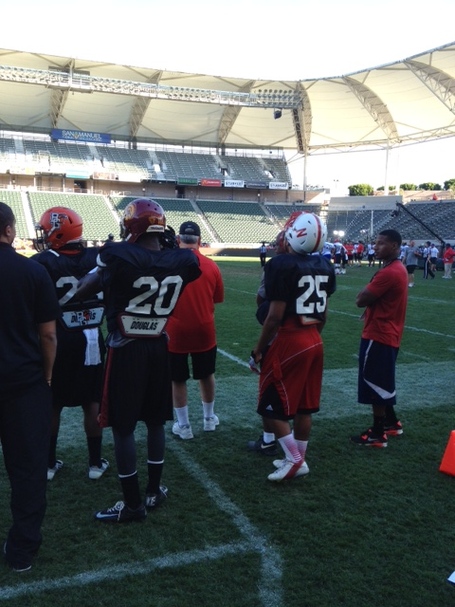 It was a cool experience, hearing coaches call out drills and then shout at the players when they weren't run correctly. We were shoulder to shoulder with scouts from the Jets, Bears, Packers and Chiefs. We were told that Andy Reid was there earlier and representatives from all 32 teams were in attendance at some point.

Once practice concluded, many of the players milled around chatting with their agents and the press. Capitalizing on an opportunity to talk with Ohio State quarterback Kenny Guiton, I wondered what his feeling was if placed in a situation similar to Cincinnati's.

As the last of the players departed, we saw Terrell Owens running passing drills with Andre Reed and Matthew Hatchette. Of course, since he spent time with the Bengals, Anthony and I made our way to meet him and shake hands. 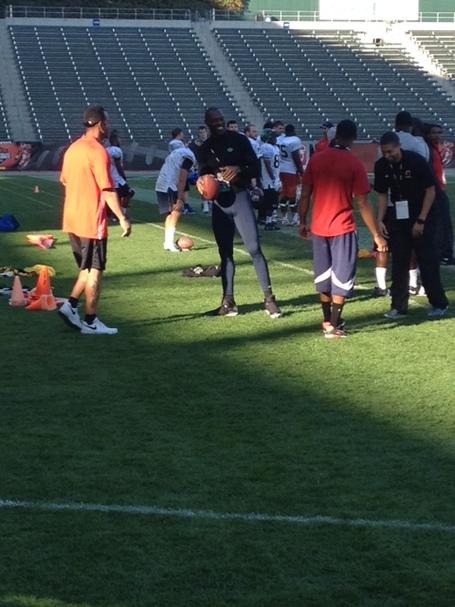 Eventually, we left the stadium. It was an awesome experience getting to be on the field that close to the action. The intensity of the practice was much more than I had expected, considering it's an exhibition game.

The next phase was the actual game. I arrived 40 minutes prior to kickoff and flashed my badge as I entered in the media gate. After being greeted from the press box, I was shown to my assigned seat. 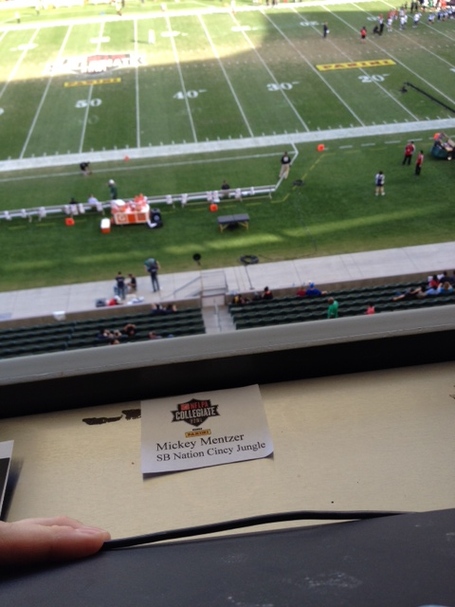 Armed with my iPad, laptop and phone, I was ready for the game to start. At the seat was a media guide and an updated player roster for each team. I tried to keep up with the game action by taking notes on my computer and sending out tweets as the game unfolded.

It was awesome sitting beside the NFLPA representatives and asking questions as they rolled in on twitter.

Another cool aspect to sitting in the booth were the stat sheets that rolled in after every quarter. They highlighted the major plays of the quarter and the stats (yards, tackles, etc...). They were delivered to each member of the press shortly after the end of each quarter. 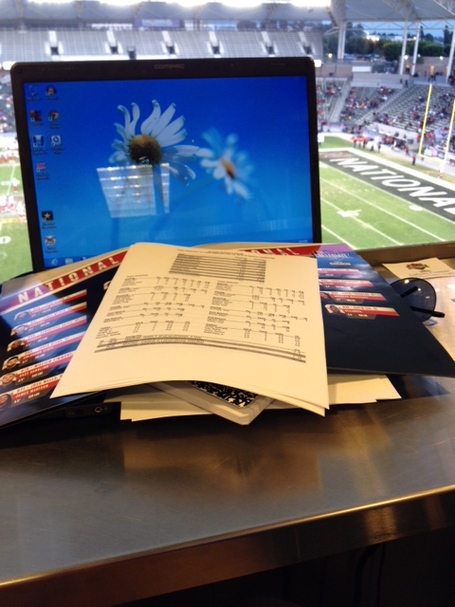 Before I knew it, halftime had arrived. There was a half-time show, but we had food prepared. Wings, barbecue, wraps, salad and other offerings showed the treatment that the NFLPA was offering everyone. 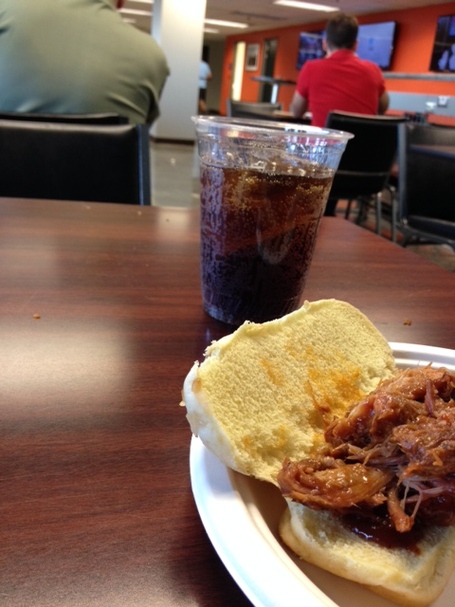 The second half played out like the first. There were those stat sheets, friendly banter and numerous tweets. As the game reached its ending, NFLPA officials were debating the game's MVP. It felt like an honor to be part of the conversation that would eventually hand the MVP trophy to J.C Copeland.

After that decision was made, we were escorted onto the field for the post game awards presentation. Players were still amped up and cheering their victory. 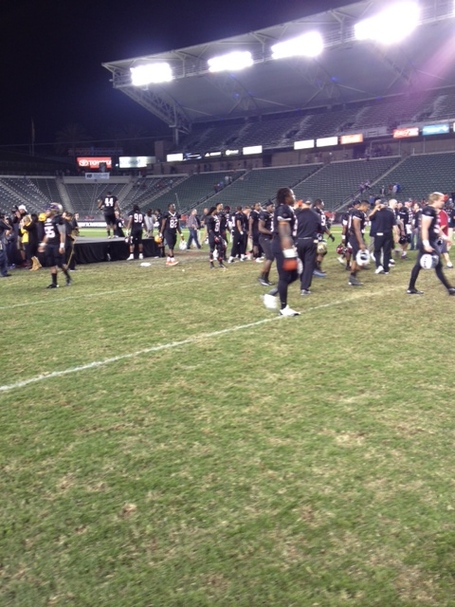 As those ceremonies wrapped up, we followed the crowd off the field. I managed to get next to Dick Vermeil (winning coach of the event) and snapped a couple photos as he stopped to sign some autographs for the LA Rams fan club. 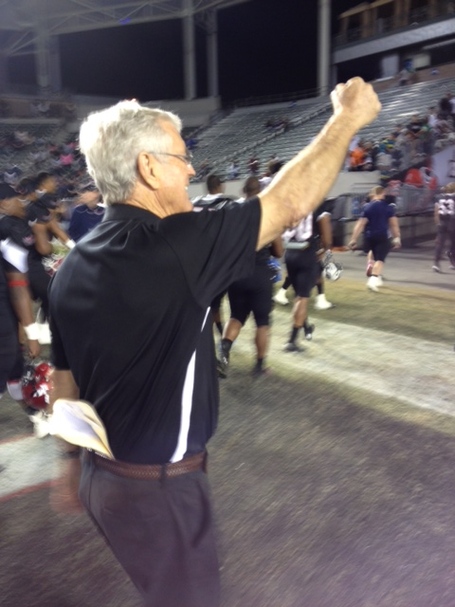 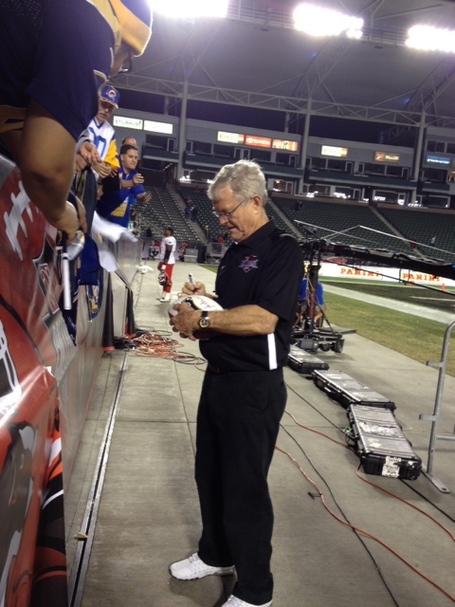 We navigated through the tunnel as players tossed game-worn merchandise into the stands as souvenirs. 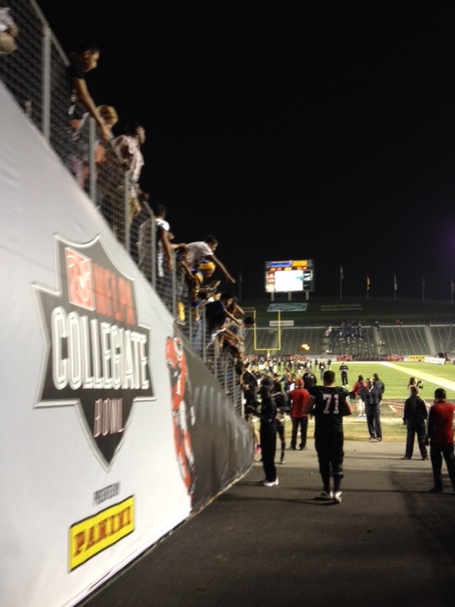 The evening was capped at the postgame news conference with both Dick Vermeil and J.C. Copeland. Both stayed for a few rounds of questions from the press -- it was really cool being front and center for that part of the day. 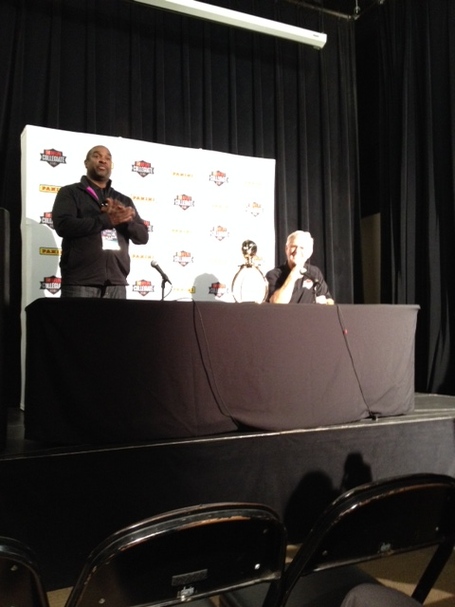 I would like to say thanks to the NFLPA, and everyone involved in the game, for the opportunity to be at the event. It was an incredible experience.