Bengals wide receiver A.J. Green is well on his way to reaching god-like status -- yet he still remains a mere mortal. Green posted 1,426 yards receiving, which currently ranks in franchise history for a single-season (Chad Johnson, 1,440 yards in 2007 and 1,432 yards in 2005). Yet Green dropped 11 balls (out of 109 catchable passes) and Andy Dalton's quarterback rating when throwing to Green was 76.8, including 12 interceptions (most by a quarterback when targeting a single-receiver).

Don't let that mislead you. He's the present and the future rolled into one ball of fantastic.

Green's 260 receptions in the first three season to start a career is the most in NFL history, surpassing Anquan Boldin (259). His 3,833 yards receiving is the second-most (in the same span), planted firmly behind the 4,163 yards receiving that Randy Moss posted with the Minnesota Vikings. Green is also the first wide receiver selected to the Pro Bowl in his first three seasons since Moss. 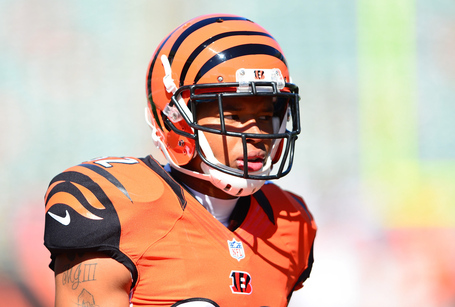 A worth (and obvious) mention as the team's No. 2 receiver, Jones' breakout season included 51 receptions with 712 yards receiving and ten touchdowns. Jones and Green became the first Bengals duo to post 10-plus touchdown receptions during the same season in franchise history.

Jones, who led the team with 130 yards receiving in the playoff game against the San Diego Chargers, figures to be the team's truest definition of a No. 2 wide receiver, opposite of A.J. Green in 2014. There's a big up-arrow associated to his name. 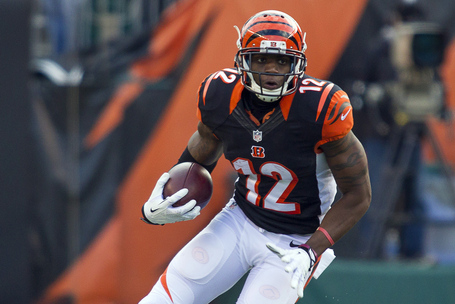 I'm still not sure what to make of Sanu. He's a good third-string receiver when Cincinnati played three-wide, posting career highs in receptions (47) and yards receiving (455). Sanu was Cincinnati's primary slot receiver, posting a team-high 24 receptions and 219 yards receiving.

In my opinion, Sanu is a productive player but should't be considered a lock to become the team's third receiver -- not with Hawkins rehabilitating and likely returning as a restricted free agent. 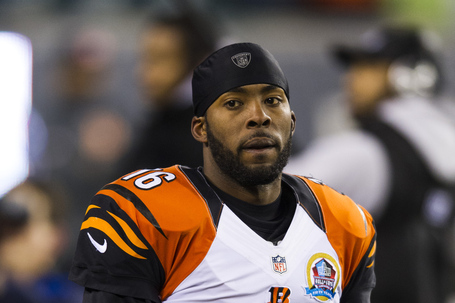 Hawkins had a few moments in 2013, but last season was mostly wasted due to a high-ankle sprain that he had suffered during training camp. Hawkins played eight games in 2013 (played 13 and 14 in 2011 and 2012 respectively) but set career lows in receptions (12) and yards receiving (199).

Cincinnati will have to figure the tender level that they want to apply on Hawkins, who enters the offseason as a restricted free agent.

Those actual tender numbers haven't been finalized yet, but last year a first-round tender cost $2.88 million, a second-year tender cost $2.02 million and an original-round tender cost $1.33 million. NOTE: The round is what Cincinnati receives if they don't match a qualifying offer from another team -- and since Hawkins wasn't drafted, there would be no compensation.

Our guess: A second-round tender. 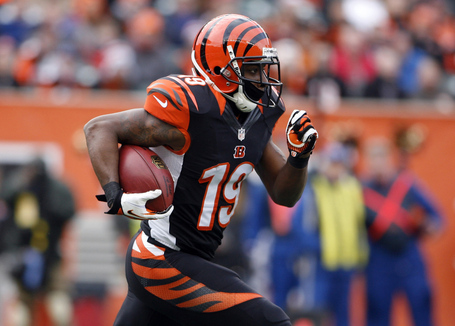 When Brandon Tate secures the football on kick (kickoff and punt) returns, it felt like he was constantly looking for the big play. Instead of cutting upfield, Tate was usually seen bouncing around for that elusive touchdown-opening lane.

That being said, Tate vastly improved in 2013. His 26.1 yard/return average on kickoff returns ranked sixth among players with 30 or more returns in the NFL. It was also the second-best average in a single season in franchise history -- Tremain Mack averaged 27.10 in '99.

Say what you will about Tate, but he's assaulting the team's kick return records. He probably returns in 2014. 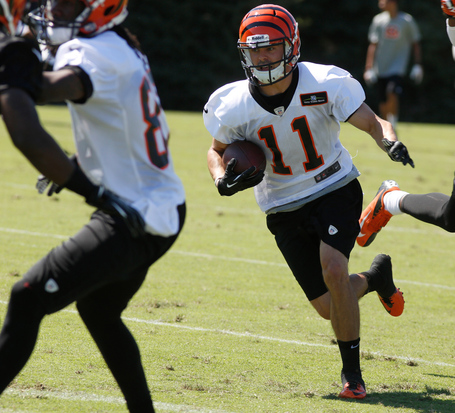 Sanzenbacher is in the same boat as Hawkins. A restricted free agent entering the offseason, Sanzenbacher figures to be an original-round tender, risking the loss of any compensation due to being an undrafted free agent. Playing ten games in 2013, mostly in a special teams role, the fourth-year wide receiver posted six receptions for 61 yards receiving.

We wouldn't count Sanzenbacher out right now, considering that Brandon Tate will enter the offseason as unrestricted free agent. 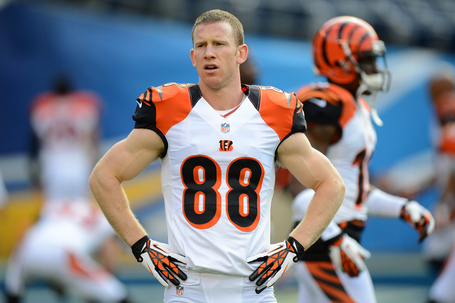 Despite many disregarding Whalen's future in Cincinnati, the fourth-year receiver is a consummate pro who does everything that's asked of him. Projected as a training camp bubble player over the past two years, the Bengals have done everything possible to keep him on the active roster.

However, at some point you have to wonder how much longer Cincinnati can afford to use one of their valuable roster spots on a player that only played four games in 2013 and posted no receptions. In three seasons, Whalen has played 17 games, posted 11 receptions and 80 yards receiving. Yes. He plays special teams, but in coverage/blocking, not returns.

For the reasons stated above, I like Whalen. However, at some point the team might have to disregard their enthusiasm for him if he's not going to give Cincinnati more production on offense. 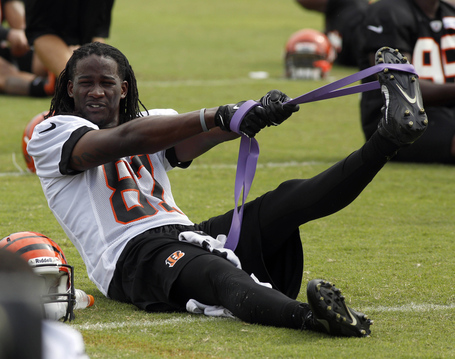 One of Cincinnati's sixth-round picks from the 2014 NFL draft, Cobi Hamilton spent his entire rookie season on the team's practice squad. Since he didn't qualify for an accrued season, he's now defined as a first-year player. Hamilton tied for the team lead with seven receptions during the preseason, scoring a touchdown and 68 yards receiving.

Unless he has a fantastic spring, summer, training camp and preseason, we don't see Hamilton having much impact on the team's 2014 roster. But stranger things have happened.