During this two-week period of no Bengals football, what better to cheer you up than to fire up the Fanspeak mock draft simulator!

Click on this link for the full draft results. Fanspeak is apparently impressed by the Bengals so far this season, as it has the Bengals winning the Super Bowl and thus owning the 32nd pick in each round of the draft. Compensatory picks are not included yet in the simulator.

As with any mock draft, I try to take care of both need and BPA here. I'm counting on the Bengals to either re-sign both Clint Boling and Kevin Zeitler, or let one walk and start Mike Pollak (who is already locked up long-term) at the other G position, so it is not necessary to draft a high-round guard. I'm pretty comfortable with what I saw from A.J. McCarron in training camp, and I'd be just fine with re-signing Jason Campbell to another one-year deal if need be, so I didn't feel it necessary to take another QB in this draft. 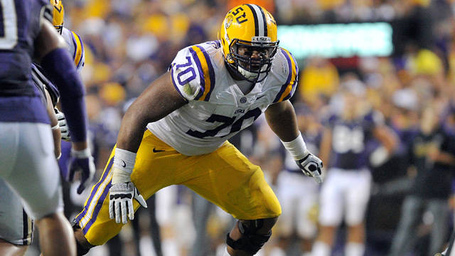 Andrew Whitworth will be a UFA after 2015, and he will be 34 years old at that time. Andre Smith might or might not be a candidate to eventually shift over to left tackle, but he is also a UFA after 2015. Those two are playing very well, with respective PFF grades of +5.2 and +4.6 in 2014 so far, but they are no guarantee to remain. Marshall Newhouse is a UFA after 2014.

Collins primarily plays left tackle, though he has played left guard as well. He stands at 6'5", 315 pounds and runs a solid 5.12 40 time. He is NFL Draft Scout's #3 OT in the 2015 Draft. Charlie Campbell of Walterfootball also has Collins as his #3 OT. Campbell had this to say about him just before the 2014 season:

Collins played left tackle for the Tigers in 2013 and was extremely impressive. Quarterback Zach Mettenberger was protected extremely well by Collins, and the big lineman did well in run defense. Collins played well against Florida, Georgia, Texas A&M and Iowa. In the ground game, he got a lot of movement and showed the ability to be a plus run blocker as a left tackle. Running back Jeremy Hill had a lot of success running behind him. The SEC coaches made Collins a Second-Team All-SEC selection in his first season at left tackle. He has upside to develop. In 2012, Collins started 13 games at left guard and was an honorable mention All-SEC Selection. Collins was an impressive power run-blocker and helped the Tigers' stable of backs move the ball. The senior has some road-grading potential and really improved his pass protection as a junior.

Collins' production in the SEC is impressive. He is a Tiger, so he seems to be the perfect understudy for fellow Tiger Andrew Whitworth before eventually taking over at LT. Collins would also have a rapport with Jeremy Hill and James Wright. 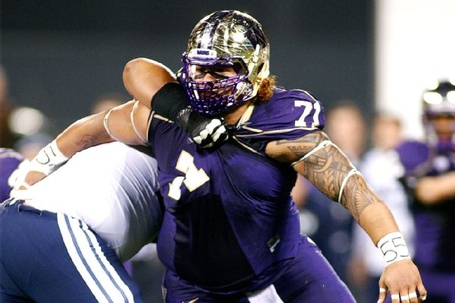 Domata Peko has been steadily declining since last year. In the playoffs, Peko was completely manhandled by a backup C, Rich Ohrnberger. So far in 2014, Peko's PFF grade is the second-worst on the entire team, at -5.4. Devon Still is more of a 3-tech DT who is better suited to back up Geno Atkins, not Peko. Brandon Thompson is still a contender for long-term starting nose tackle, but he has not been consistent enough to be confident about.

Through the first three weeks of the season, Shelton leads the nation in sacks with six. He had two sacks against Hawaii in the opener before a four-sack game against Eastern Washington. Not only has Shelton been getting to the quarterback, but he also has been stuffing the run. Shelton has 27 tackles with 7.5 tackles for a loss and six sacks in 2014. Shelton turned in 59 tackles with 3.5 tackles for a loss and two sacks in 2013. He had an excellent bowl game against BYU with seven tackles and a lot of disruption at the point of attack. In 2012, Shelton recorded 45 tackles, .5 sacks and four tackles for a loss. He was an All-Pac-12 honorable mention that season. Shelton is a nice fit as a nose tackle who has a burst to get a push on the pocket. He would be a fit as a nose in a 3-4 or 4-3 defense. 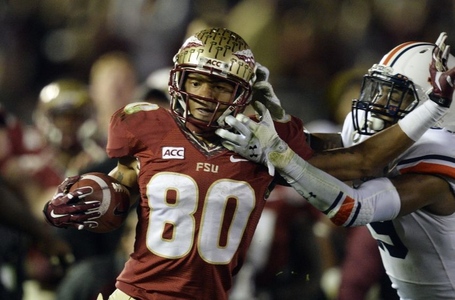 A.J. Green will most likely be locked up by the Bengals for a long time. But the unfortunate reality is that there is a good chance that the Bengals will not be able to retain both Marvin Jones and Mohamed Sanu, perhaps only one of them when both become UFA's after 2015. Furthermore, Dane Sanzenbacher and Brandon Tate are both UFA's after 2014.

Greene is FSU's number one wide receiver, and is already one of the best receivers in FSU history. He played very well on the big stage in the BCS National Championship Game, and he also came up huge in multiple high-stakes ACC games in 2013. He is NFL Draft Scout's #4 WR for the 2015 Draft, standing at 6'0", 178 pounds with a solid 4.47 40 time. Campbell has him projected to go in rounds 2-3. Campbell has this to say about him entering the 2014 season:

While Greene doesn't have an elite physical skill set, he is a very polished receiver. Greene is an excellent route-runner who uses quickness to gain separation. He isn't an elite downfield burner, but he has enough speed to get open in the intermediate part of the field. Greene also has great hands. He is extremely trustworthy for his quarterback. Greene always competes for the ball, and if he doesn't catch it the pass is probably incomplete. You don't see him double-catching lots of balls or deflecting passes in the air for interception opportunities. Greene is versatile to line up in different places. For the NFL, Greene looks like he could be a solid No. 2 receiver. He doesn't have the mismatch size or speed to be a true No. 1, but if paired with an elite No. 1 receiver, Greene could do a lot of damage. Greene should be able to play outside, especially if he can add some strength, and he also would be a good slot receiver. In three-receiver sets out of the slot, Greene could be a real asset on third-and-manageable situations to move the chains.

Greene is a good student, having made the ACC All-Academic Team in each of his first three seasons. 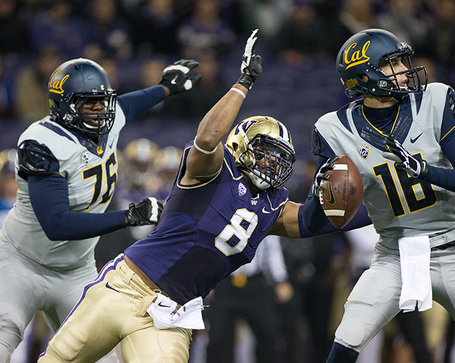 The Bengals have been using a lot of the nickel defense this year so far. Oftentimes, they have specifically used the nickel 3-3-5 defense, which includes an outside edge linebacker who can either rush the passer or drop back into coverage. James Harrison held that role last year. This year, it has been Robert Geathers, and he has been really bad to the tune of a -6.5 PFF grade, worst on the team. That's an aggregate score, meaning that Geathers has been downright awful (a -6.5 score for a starter, while bad, would not be nearly as bad as -6.5 for a non-starter). He's a UFA after 2015.

Kikaha is a mild steal at this juncture, ranked #7 at OLB according to Campbell. He stands at 6'3", 246 pounds with a 4.70 40 time. It is plausible that Kikaha could fall to round 4, because his somewhat slow 40 time might scare certain teams off. However, in terms of production, Kikaha is outstanding. He also plays DE, and is ranked #3 there according to NFL Draft Scout. Campbell has this to say, early into the 2014 season:

This season (2014), Kikana has 17 tackles, five sacks, 5.5 tackles for a loss and one pass batted. He dominated Illinois in Week 3 with three sacks and six tackles. After missing the 2012 season with a knee injury, Kikaha took the Pac-12 by storm as a junior. He ripped off 13 sacks with 70 tackles, 15.5 tackles for a loss, three forced fumbles and three passes batted. He had only 15 tackles in 2011 and 49 stops in 2010. Kikaha is a dangerous edge rusher who could rise high if he can stay consistent with his 2013 performance.

Whether it be at nickel 3-3-5 edge LB, or at WILL, or at SAM, Kikaha would be useful for the Bengals. 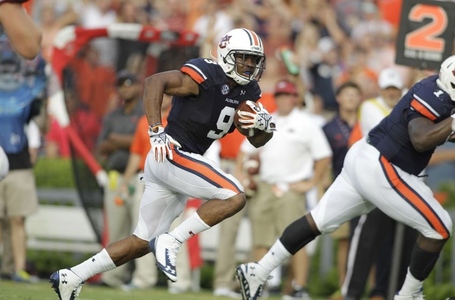 Both Bengals starting safeties, Reggie Nelson and George Iloka, are UFA's after 2015. The Bengals will want to re-sign SS Iloka, but FS Nelson will be 32 by then and not a long-term option. As the Bengals did with Iloka, they can draft a safety in round 5 and groom him for a year before tabbing him a starter the following season.

Whitehead is not really a physically outstanding player, at 5'11", 193 pounds with a 4.61 40 time. However, he has been nothing but a solid defender for Auburn. He's a steady tackler and playmaker, he's a team leader, and he's very durable. As a prospect, he seems to be somewhat of a "Reggie Nelson Lite." He is NFL Draft Scout's #4 free safety for the draft, and is projected in about round 4. Whitehead might fall a bit because he is currently suspended for yelling at an Auburn assistant coach. Campbell has this to say, early into 2014:

Whitehead is an accounting major at Auburn, which is fairly uncommon among relatively top-tier college football players. 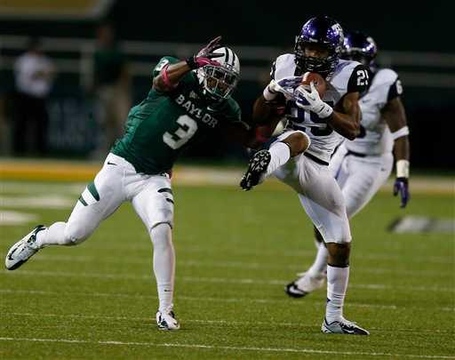 Terence Newman is a UFA after 2014, and Leon Hall and Adam Jones are UFA's after 2015. Darqueze Dennard is one long-term solution at starting CB, but Dre Kirkpatrick has been terrible so far at CB in 2014. He certainly has not lived up to his first-round draft status from 2012, and may not even be a long-term solution at CB. Plus, the Bengals often run the nickel, so even if Kirkpatrick improves and eventually becomes a starter, there is still one more long-term open spot.

Kevin White seems to be a "Jason Verrett Lite." When Verrett was TCU's #1 CB last year, White was across the field as the #2. This year, White has moved up to #1. They also have similar physical attributes - White is 5'10", 175 pounds with a 4.43 40 time. He's a bit undersized, but fast and physical. NFL Draft Scout has him in the round 4-5 range, so he is a mild steal here. It seems he'd be a good fit at nickel CB in the Bengals' scheme. 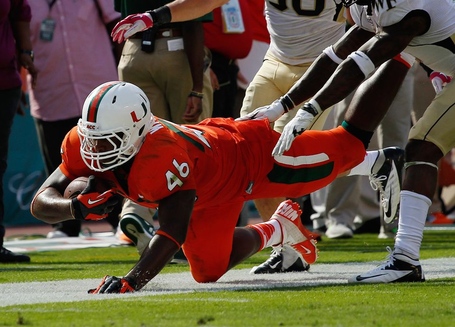 Mr. Walford is the Mr. Irrelevant for the Fanspeak mock draft. Jermaine Gresham is a UFA after 2014, and we don't really know for sure about Tyler Eifert's injury (knock on wood). One TE backup is starting FB and undrafted rookie Ryan Hewitt, who has been decent so far. But street free agent signee Kevin Brock should be easily upgradeable.

Walford is a mild steal here, projected by NFL Draft Scout as the #6 TE in the draft and in the fifth round. He is big-bodied at 6'4", 263 pounds, but a bit slow with a 4.87 40 time. According to Campbell, he seems to be a solid receiver and possesses upside:

Walford was impressive in Week 1 with three receptions for 38 yards and a touchdown. He's a nice mismatch weapon who should see more targets. Walford is coming from a school known for its star tight ends and has been a solid contributor for Miami the past two seasons. In 2013, he caught 34 passes for 454 yards with two touchdowns. The previous season, Walford made 25 receptions for 451 yards and four scores. He caught 18 passes for 172 yards and a score in 2011. Walford has upside to develop and could provide his biggest production in 2014. The senior still needs to improve his blocking.