We're quickly finding out why the coaches were so excited to see Lamur play last year, and why the Bengals where hurt when he didn't.

Share All sharing options for: Film Room: The Emergence of Emmanuel Lamur

Emmanuel Lamur is a guy we have been hearing about for more than two years now. The coaches were giddy about the athletic freak they could groom in 2012.

As an UDFA, I remember how he impressed in camp and we were all worried he would not clear waivers. Luckily for us, he did. Later on in his rookie year, Dontay Moch was placed on IR and Lamur saw his first game action.

The real excitement of the coaches came the following season. He came to camp no longer as a rooking trying to make the squad, but as a guy expected to start next to Vontaze and cover the TEs.

Unfortunately, he injured his shoulder late in the preseason and was lost for the season. That made us think, what might have been, as TE after TE torched the Bengals defense. It also made the anticipation of his return this season even more exciting.

The coaches talked him up so much and continually expressed how big his role would be on this defense. Nationally he was still a ghost; just see what Jason La Canfora tweeted during training camp

Punches flying at Bengals camp during and after running drill. Some guy named Emmanuel Lamur swung on AJ. Um, his days might be numbered

Lamur has been an absolute monster through the first three games. Against the Falcons, he caused an interception, had a touchdown saving tackle... twice, and smothered the opposing tight ends all game long.

After Vontaze went down, he was making defensive adjustments and made sure the win was secured. Here, I breakdown some of his best plays of the first three games to show just how important Lamur has been to this stout defense's success.

It would take too much time and not be very informative if I broke down all the coverage plays that he had that were crucial in this game. The fact is, Lamur smothered the TE's & RBs in this game all day long, if they caught it, they got nothing after the catch, he was outstanding. 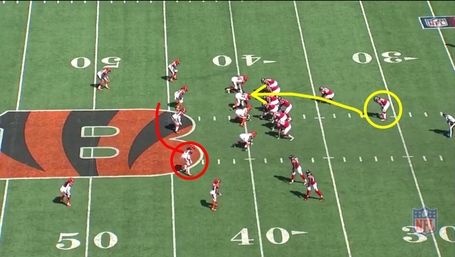 Lamur does a great job of keeping his eyes in the backfield and reading that it is a run play right away. He sees Jackson with the ball and the WR coming to try to block him. He begins to slide back to the middle to assist with the play 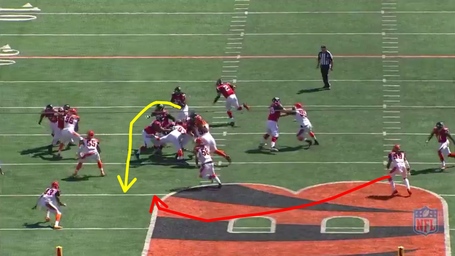 Stephen Jackson is a smart veteran runner. He waits for the blocks to set up and hits the cutback lane. Lamur sees that his teammates are all blocked and is now sprinting to make the tackle. He knows the 2 deep coverage they started in and since Iloka is down in the box this could get dicey. 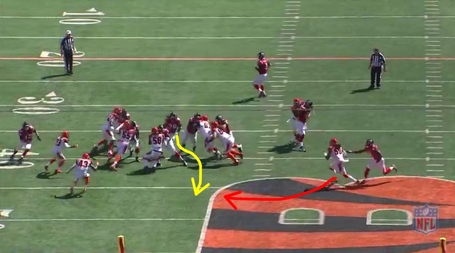 Here is where you can see the touchdown saving tackle. Iloka got caught up in the wash and the WR who missed his block on Lamur has made his way to the next level. He will easily be able to get in Reggie Nelson's way to prevent him from making the tackle.

As you can see, there is a HUGE alley down the right sideline, if Lamur had not tackled him, this would have been a touchdown for sure. A key point is at this time, the game was still tied and Nugent missed field goals all half. The game could have played out differently if there were a score on the play. 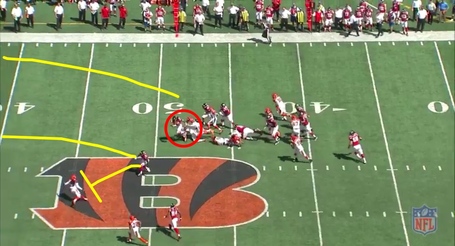 In punt coverage, he stays in his lane and forces Hester back inside so he cannot turn the corner. He squares him up and makes the tackle. 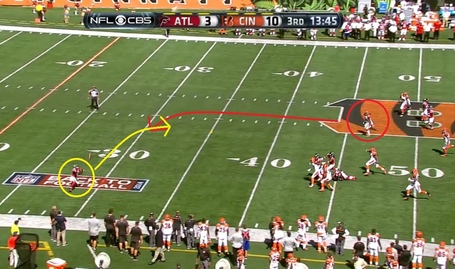 He breaks down and closes the angle on Hester, this prevents him from breaking to the outside and forces him back in where Lamur has help. By making him cut back, he takes away Hester's huge asset of speed and elusiveness. 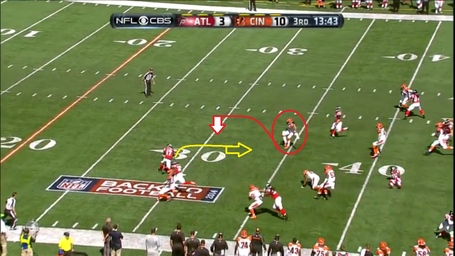 Lamur squares him up and makes the tackle. This was a one score game at this point. Not allowing Hester to swing the momentum in this game was key. 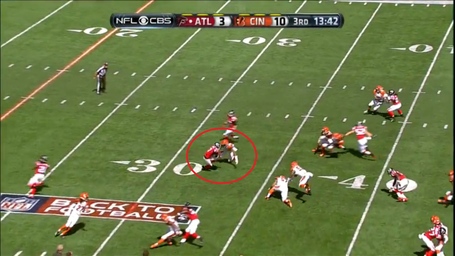 Here is a play you might not have noticed Lamur caused. Leon Hall's INT. He actually never touches the ball and causes the INT. It's Lamur Black & Orange magic.

***Below*** In this play sequence, Lamur sticks with the motioned RB (Steven Jackson). This is Matt Ryan's primary read on the play. He is covered so well by Lamur he cannot make the throw. The Bengals defensive line had been getting to him fast all game, his internal clock was going off.

He snaps back to the weak side and forces the ball to the TE. Burfict gets a hand on it and Hall makes the diving INT.  The real key to the play was Lamur shutting down his first read, this is what caused the snap decision. 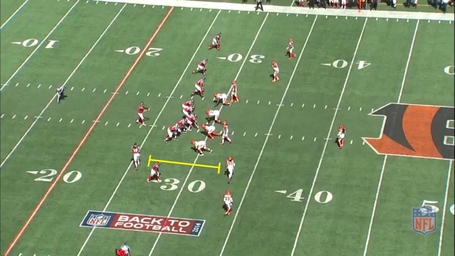 In this shot you can clearly see Matt Ryan looting to throw the ball to Jackson. He is unable to so he has to go through his read progressions. 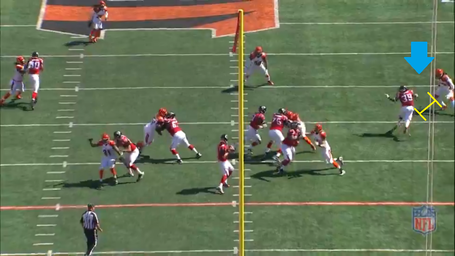 He tries to force the ball to the TE and "throw him open." He doesn't get the ball past Burfict and the rest is history. 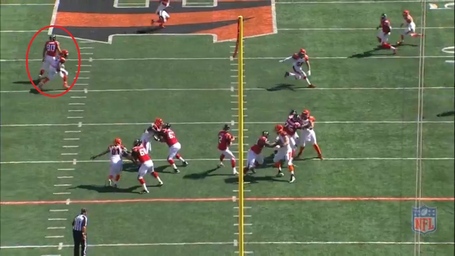 Key plays vs Tennessee:
1st Quarter
1.) Lamur overpersues the play and allows Locker to cutback and scramble for a first down. (13:42)
2.) Lamur bites hard on the run fake to the left, this leaves the TE open in the right flat.  Luckily for him the other LBs rally to the play and make the tackle. (3:20)
3.) He gets pressure up the middle and causes the QB hurry.  The throw comes out early and causes the incomplete pass.
2nd Quarter
1.) The team makes is in cover zero "house blitz" and Lamur does a great job of covering the TE and jamming him off the line.  The pressure gets there quickly and Locker has no options.
2.) He picks up RB (Sankey) and forces Locker to run on his rollout.  This is important because since it was a very small game it allowed them to get a holding call in the endzone on the ensuing punt for a safety.
3.) The snap is fumbled and he alertly notices it and nearly recovers it before the Delanie Walker falls on it.
4.) Lamur is in a zone covering the flat.  He sprints up to cover the RB and closes off Locker's check down option. Locker then panics and throws across his body to the endzone and Nelson picks him off. (0:32) Play Breakdown below
3rd Quarter
1.) Lamur needs to continue to work on his strength at the POA with blockers.  He can get held up in blocks at times.  That is the case on this play, he gets held up on the block and the RB gets a 8 yard gain before he can get off the block. (12:13)
2.) He makes a great persuit of the RB and makes the tackle.  Shortly after his play he was taken out of the game. 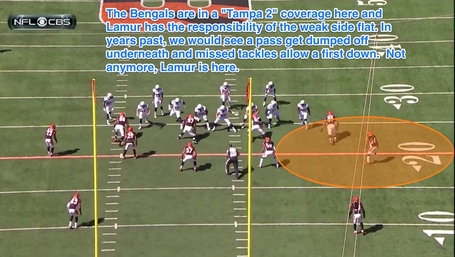 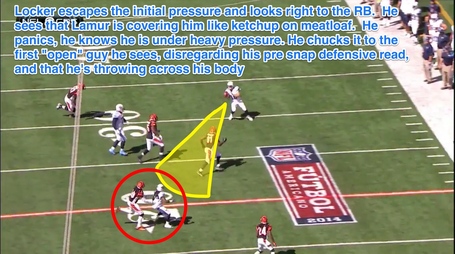 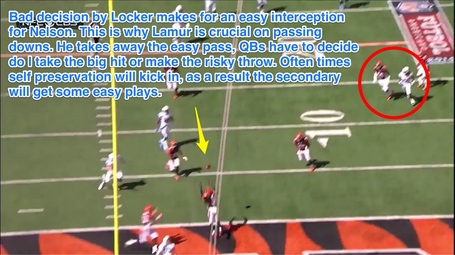 Final Thoughts:
One of the biggest things that hampered this team last year, even when they were winning, was coverage of TEs and RBs. It is now quite easy to see why the coaching staff was so bummed when Lamur went down last year. It wasn't smoke and mirrors, they planned for him to be a big contributor.

If Lamur can keep up what he has done in the first quarter of the season all year, it's a huge lift to the defense. In this pass heavy league, the Bengals know they will have to face the likes of Peyton, Rivers, Brady, Brees, Rodgers, or some combination of them on their possible Super Bowl run.

They will need a guy with Lamur's skill set to help slow down those offenses.

The above screenshots are courtesy of NFL Rewind

FREE TICKETS TO THE PANTHERS HOME GAME:
As a thank you to the CincyJungle readers for the support that they have given to me and that they give to all of the staff, I am buying two tickets to give away to a reader. The tickets will be for the Panthers Home game and I will be giving the contest details out on my twitter. So make sure you follow me if you want a shot at the tickets. The contest announcement will be just before the Bengals vs the Patriots and submissions will be due by Tuesday October 7th at 9:00am.  We will announce the winner of the contest on Inside the Jungle the following Wednesday night.