Share All sharing options for: Film Room: Leon Hall is the Bengals Slotmaster

In the early times of the spread offense, the slot was the place where head coaches would put that short cornerback they could not risk facing the big wide receivers outside.

That was before, but now it is clearly one of the key jobs in the sport (to the point that some teams play the nickel defense as their base scheme and we saw the Chiefs in preseason starting three cornerbacks), and Marvin Lewis is lucky they can count on their number one cornerback to handle the duties.

Some players can never be comfortable playing inside because of the many ways a wide receiver can set himself free whereas they always have the boundaries on one side. Leon Hall is so important to this impressive Bengals defense that PFF had him as one of the costliest injuries of 2013, when he was the fifth-best cornerback in the league, although veteran safety Chris Crocker filled in admirably the rest of the year. The Michigan product has mastered the slot and proved himself day in day out in spite of two torn Achilles in the last four seasons.

In 2014 the Cincinnati Bengals rank at the top of the PFF charts in pass coverage, with a +11.9 grade, only topped by San Francisco's +12,9, having stopped the high flying Falcons offense on their way. That game in Week 2 against a red-hot Matt Ryan and Atlanta's spread offense was a test that Hall passed with flying colors.

Despite this and his numbers for the first three games (12 receptions for 87 yards, 1 interception, 1 pass defended and a 51.9 QB rating) his name keeps being forgotten by much of the media and fans elsewhere. So let's take a look at the tape and see why Hall deserves more credit.

At the end of the first quarter, and with Cincinnati up 3-0, the Falcons had a long drive that netted 3 points to tie the game, but before that, they had the chance to move the chains on this play, where Leon Hall breaks the pass on the shallow route. 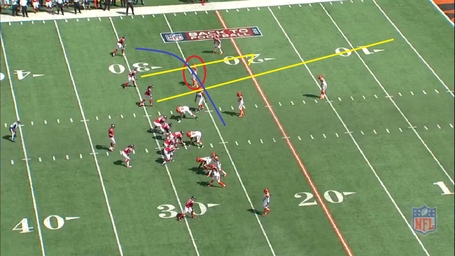 As you can see in the next caption, the Falcons are going to try to set up a pick to take Hall and the linebacker out of the way, but he wants none of that and quickly gets to the football.

Of course the play was not going to the house, but he sheds the block and prevents the catch.

In the second quarter, and again in the final minutes with the Falcons down (now 10-3), Atlanta cannot get anything yet, with a great Bengals defense preventing any long pass.

This play coming next is a very good example of how Hall works in the slot. First, he tries to disrupt the receiver route and he goes on taking the flat, here stopping Roddy White for six yards only.

He reads well the play and the receiver can only get 6 yards after Hall's tackle.

He also had his first interception of the season, off a tipped pass but with a very nice effort, suddenly ending almost any hope the Falcons had to come back from down 17-3.

Matt Ryan would be picked off again in the third quarter, this time by Iloka, but in the pass Hall had the receiver covered all the way. If the ball was going to the receiver (there's a clear miscommunication between the Falcons players) I don't think there is a chance he catches it either.

As we can see here, Hall is all over the place and had Ryan thrown leading his receiver on the post route the Bengals cornerback would have been there.

This is another example of how good Hall is inside. This time, he disrupts his man's route good enough for Ryan to have to scramble in the fourth quarter.

Also in this drive, Cincinnati gets a sack, thanks to Leon Hall's great coverage here, closing in to the open space.

Ryan's eyes are set in the middle of the field, where he thinks he has a window open to throw the football, but the veteran cornerback, coming off deep coverage in this blitz play, sees it and the Falcons passer makes the pump fake trying to get something going. Unfortunately for them, that's given time to Reggie Nelson to get to him for the sack.

The Bengals defense is excelling at coverage, and one of the reasons is Hall's ability to shut down the inside, being comfortable in man defense and zone as well with very good technique and use of his hands and as though he'd never been injured before, something that really worried the team's fan base.

We had some doubts when he struggled against the Jets in the preseason, but so far, he's proved the doubters wrong and seems to be at 100%.